Cinematic Narrative and the Ethics of Slaying Monsters

In 1988, I spent more hours of my life than I care to recall playing Zelda II: The Adventure of Link on my original 8-bit Nintendo. Combined with Ridley Scott’s Legend, Jim Henson’s The Dark Crystal, and Rob Reiner’s The Princess Bride, it gave me a soft spot for sword and sorcery. Playing Shadow of the Colossus on my Playstation 2 reminded me of that. It’s sad and simple and beautiful. It makes me wonder about the value of narrative meaning in art, and about why people feel the need to kill monsters.

Sword and sorcery as a genre has a familiar default storyline that lends itself well to being sketched out shorthand. Early action-adventure games like Link that combined platforming and role playing elements really only made a gesture towards narrative. Prince or princess, call of destiny, evil enchantment, quest to prove valor, final test of worthiness: it’s a story we’d all heard and our imaginations didn’t need much prompting to bring it to life. It was an excuse to jump over mud pits and slay dragons, no ethical complications required.

Over time, enhanced graphics capabilities began to blur the lines between film and games, and storylines evolved into more cinematic narratives. A fundamental tension evolved between cinematic narrative and gameplay, content and form. It required players to make more choices and be involved emotionally in a way that had not previously been the province of games, while at the same time bringing an element of passive viewing to an otherwise interactive experience.

Shadow of the Colossus is visually beautiful and has virtually no narrative. It was originally released in Japan as Wanda to Kyozō, and director Fumito Ueda describes his approach as “design by subtraction.” There’s a story arc in which the protagonist, Wander, has to defeat 16 Colossi in order to restore life to a girl whose body we see at the beginning, but it doesn’t seem to be the point. There are no quests or characters to interact with beyond finding and killing the Colossi, and the primary action is riding your horse through waving grass and desert sand looking for them. You spend enough time galloping around to really capture the feeling of searching for something across a vast distance.

The game is also profoundly textural. The way the dust kicks up as you ride, you can almost feel the wind. When you find the Colossi, you climb them to find their weak points and each part of their anatomy has a different texture. Often the entire screen behind you is filled with fur or scales as you cling to their massive bodies. The high and low angle camera perspectives and how they move under you evokes a sense of vertigo that makes the experience of trying to kill them stressful and oddly realistic. 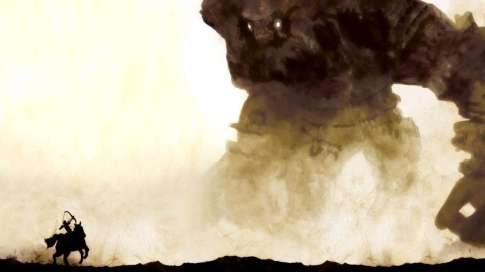 In a game like Colossus, the emphasis on the emotional experience allows for moral ambiguity and complexity. The Colossi are beautiful and impressive creatures. You find them in repose or roaming around, and there is no sense that they are doing any particular harm. I can’t recall any narrative about what they’ve done or what threat they pose to explain why you are killing them, just that it’s necessary for them to die in order to restore life to the girl. They seem to understand that you’re there to kill them and they defend themselves against you, but there’s no sense of hostility about it on either side. Vanquishing them seems like an obligatory task for which the hero pays a price, rather than the traditional genre convention of a victory to rejoice in. Their expressions when they die are almost puzzled, and the musical score lends an air of melancholy to the entire quest.

Despite hearing great things about Colossus, I resisted playing it at first because I always feel apprehensive about a game that involves slaying monsters. I identify with their liminality. It’s hard for me to want to kill monsters when they’re so often a metaphor for outsiders, freaks, and anyone or anything different. I’m not a big Disney fan, but one thing that stuck with me was the angry mob in Beauty and the Beast singing “We don’t like / what we don’t understand / In fact it scares us / And this monster is mysterious at least.” In that context, monster slaying is ultimately a manifestation of xenophobia.

That my ambivalence about killing the Colossi is reflected in the game is what made it possible for me to enjoy playing it. It’s not like John Gardner’s novel Grendel, with its existentialist exploration of Beowolf from the monster’s perspective, but it’s not the archetypal hero’s quest either. What it most reminds me of is Hayao Miyazaki’s Princess Mononoke, which focuses on the conflict between giant animal gods who are the ancient guardians of the forest, and the settlers of Iron Town who want to clear cut it for resources.

The hero, Ashitaka, is forced to kill a giant demon-possessed boar god who lays a curse on his arm which makes him strong, but will eventually kill him. The curse manifests visually as smoky black tendrils winding around his arm, which look a great deal like the black tendrils that seep out of the Colossi and become a part of Wander after he kills them. They seem to give him strength, but, like Ashitaka, they also slowly kill him. 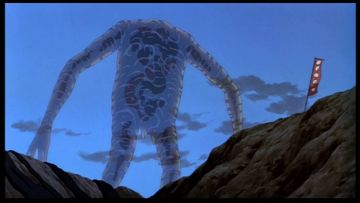 The leader of Iron Town decides that the solution to the conflict is to hunt and kill the Forest Spirit, a being that transforms into a giant Nightwalker and wanders the forest like one of the Colossi. She manages to shoot its head off, but by decapitating it, she transforms it into a god of death that destroys everything it touches in a quest to find its severed head. The metaphor here is more clearly social-environmental than in Colossus, but I think the practical conclusion to be drawn is the same:

If you’re thinking of searching for giant gods who are minding their own business and trying to kill them, don’t. It doesn’t end well.

alex MacFadyen used to wander the wilds of Alberta by moonlight like a freakishly tiny Colossus. Now he goes to bed shortly after 10:00.

Alex MacFadyen is a muppet-identified writer, bookworm, and creator of strange liminal creatures. You can find more of his creations and musings at Critter Lab on Wordpress. View all posts by Alex MacFadyen