Two great scifi writers, Robert J. Sawyer and Robert Charles Wilson, just published concluding volumes in their respective trilogies. Other similarities: both are Canadian, both have won Hugos, and their latest books are quite intriguing.

Of the two writers, their careers resemble each other to a remarkable degree: Sawyer has published 20 novels and 2 short story collections, while Wilson has published 15 novels and one short story collection. That makes Sawyer slightly more prolific since he put out his first book in 1990 and Wilson’s first novel came out in 1986. That’s not a huge difference. Likewise, Sawyer won a Hugo Award for Hominids in 2003, and Wilson’s Hugo for Spin followed in 2006. And now they’ve wrapped up their current trilogies at around the same time.

I’ll start with Wilson’s book. Vortex wraps up a set of books that started with Spin and continued with Axis. I talked a bit about Spin and Axis a few years here on the Gutter. I didn’t care much for Axis, but Vortex is a much better book. At the heart of Spin, we find a marriage of the wildest speculative ideas and interesting characters, a hard match to make, and likely why the book won a Hugo. Book two, Axis, seemed to abandon the wacky-idea approach, and focused on a set of characters.

That’s just what a number of Wilson’s earlier books had done, and quite successfully I might add. But none of them had been slotted in as the sequel to a book balanced so daringly on the knife’s edge like Spin. Vortex gets closer to the feeling and feat of Spin, so at a basic level it’s a more satisfying sequel.

What’s more, Wilson concludes Vortex with a virtuoso setpiece that explains all of the grand mysteries of the series. I got a little scared when I saw what was happening, since this is a narrative strategy that can easily backfire. I’ve seen it in lots of other sci-fi series, where the first books traffic heavily in the mysteries of the universe, then the heavy-duty explanations come into play (maybe for reasons of fan pressure, maybe because the author had a lot of backstory that was just sitting around) and the whole enterprise sputters to a halt shortly thereafter. But Wilson is an elegant writer, by which I mean to say that he seems to have a pretty firm grasp of the writerly effect he’s aiming for at any point in a book and, what’s more, how to get there. The ending rings true, and round out the series rather definitively.

I found Vortex interesting on another count: Wilson has an overt interest in really hard sf, but my estimation is that his natural writing style is more focused on characterization. So I’m always curious to see where his latest book will fall on the spectrum. He’s done some interesting experiments along the way, like Bios (a rather chilly novel that takes its intellectual charge from a storyline that resembles a thousand space adventure stories but whose bleak finale the reader wants desperately to not be an inevitable one), but he seems to have a real knack for getting inside the head of his characters. If we are making cutesy record-store-style comparisons, I would say he’s Peter Watts crossed with Alice Munro. 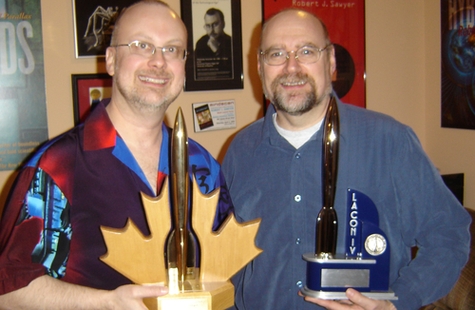 Meanwhile, Sawyer likes to stir up the intellectual buzz by taking direct aim at social issues. A short list of these kind of items in his WWW trilogy (starting with Wake in 2009, continuing with Watch in 2010, and now concluded with Wonder in 2011) would include: surveillance society, bullying, teen sex, blindness, artificial intelligence, simian rights, the evils of spam, the pitfalls of the Chinese government, and much more. Of his earlier books, I think I like Rollback the best, precisely for this reason. It’s a book that dramatizes the social implications of advanced medical breakthroughs more effectively than I ever thought possible (the Quill and Quire review gives a nice precis of the issues at hand).

Another thing that Sawyer likes to do: add lots of sly and sometimes not-so-sly responses to other works of science fiction. This rather cheeky line from Wake always makes me laugh:

The sky above the island was the color of television, tuned to a dead channel—which is to say it was a bright, cheery blue.

So… lots of fun injokes. More importantly, Sawyer constructs the entire trilogy as a rebuttal to a common scifi trope, that of the machine run amok. The idea seems to have the most impact in the movies, in everything from The Terminator to The Matrix. The WWW trilogy tries to run its narrative engine on optimism and forward-thinking, rather than fear and Skynet crushing human skulls. I have to say, Sawyer gets a lot of mileage out of the contrariness of this point of view.

It’s not a cosy future though, since the nascent artificial intelligence at the heart of the story causes an understandable ruckus in certain quarters, like the NSA and the Chinese Communist party. Especially when the new AI starts coming out for things like transparency and good government. Sawyer clearly worked pretty hard at creating an exciting story in the absence of the typical lurid AI-takes-over material, and it shows in the result.

To close, I’ll point to some good news: both authors are busy working on their next books, Sawyer with Triggers and Wilson with Burning Paradise.