The Hyper-Advanced Weapon-like Entity on the Mantle 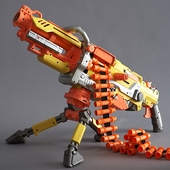 Foreshadowing is tough: too subtle and the author’s effort is wasted, too obvious and the readers will figure out the setup way too early. Patrick Lee’s The Breach is a master-class in taking the obvious setup and blasting your face off with the thing you thought you were expecting.

The storyline boils down to this: our hero with the action movie name, Travis Chase, is minding his own business in the wilds of Alaska. Through a series of gruesome incidents, he gets involved in the Breach of the title, which is a rift in space-time. Powerful artifacts come through, apparently from the future (or a parallel universe, or something), and anyone who controls a Breach entity has a huge advantage over their enemies. Chaos, and a technothriller-sized dose of ultraviolence, ensues.

Some of these entities are truly scary. The analogy that Lee uses (see link at the end) is of a group of cavemen discovering a barrel full of future technologies: cellphones wouldn’t work, but grenades would be a costly weapon to figure out how to use from first principles. A lot of the Breach entities mess with your head, like the the suitably-named Ares that drives the most gruesome chapter in the book, the one set in Zurich. If you get tagged by Ares, anyone in your immediate area becomes the target of homicidal wrath by everyone in a larger area around that.

That might seem like a spoiler. As does almost any mention of an entity early on in the book. Wow, this foreshadowing is really obvious! If someone tells Travis about the Jump Cut entity that will destroy your memory of the last 3 days for a temporary period, of course it will get used later on in the book.

But that’s the genius of the book: Lee knows that you know what’s coming, and he somehow manages to amp up the inevitable scene into something that’s fresh (and almost always extremely gory). Adam Heine over at Author’s Echo makes a helpful comparison, on this point, between James Cameron’s Avatar (we know what is going to happen, it duly happens) and Avatar The Last Airbender (we know what is going to happen, we can’t wait to see how it will happen).

Lee uses a couple of other tricks in The Breach, assembled together in a crafty way that you don’t always see in scifi thrillers like this. Lots of books provide a manly hero with a troubled past, but few do it as economically and convincingly. Check out this great opening line:

On the first anniversary of his release from prison, Travis Chase woke at four in the morning to bright sunlight framing his window blinds.

So far so good. But Lee delivers a pretty solid bit of characterization on the love interest side, to the point where even though the book begins and ends with Travis, the stunningly beautiful (yet still deadly) operative Paige Campbell gets some great scenes and a hefty chunk of attention, character-building-wise. Paige is not arm-candy, getting pulled along on manly adventures; she kicks ass, and most tellingly, when she gets scared about something, it’s usually something horrific. Travis learns quickly enough to take this as a warning.

On top of all that, Lee somehow manages to maintain a blistering pace, despite the Breach-related exposition and some nice character moments. This is an easy book to devour; that’s true of lots of books, but none with as many chewy ideas as this one.

I’ve written a fair bit about good and bad endings here on the Gutter over the years (this is a subject that really rankles with people – I happened to enjoy the ending of the Dark Tower, but some readers are still grumbling about it). So I was a bit nervous about what Lee would be able to pull off here, especially with the escalating series of revelations and graphic encounters. How to top all that stuff? But we’re in good hands, and the ending does not disappoint.

I ran across The Breach a little while ago, as part of the Big Idea series on Whatever.  I just re-read The Breach, and am making my way through the sequel, Ghost Country, again. It’s a pretty solid sequel that doesn’t slavishly follow the first book; Lee builds a fair amount of tension out of the fact that he ignores the cliff-hanger of the first book! And the concluding book in the trilogy just came out this week… Hopefully I will have a happy report soon on the ultimate ending of Travis and Paige’s story.