I’m like a cartoon! I’ll look this way when I’m eighty. I can see it now, people will be rolling me around in a wheelchair and I’ll still have my big hair, nails, my high heels and my boobs stuck out!

Dolly Parton and Elvis Presley. Two cultural icons born a decade apart, both grew up poor in Tennessee and became musical legends. They also both have major tourist attractions dedicated to them – Dollywood and Graceland – but the big difference there is that one of them is still alive and owns part of it. Well, that and the roller coasters. I’m intrigued by the difference between an attraction dedicated to a living person vs a dead one, although I suppose that only applies if you don’t believe any of the Elvis sightings. 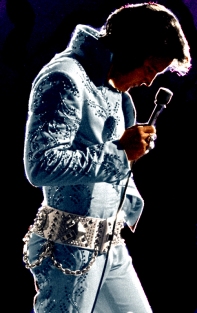 Two of my favorite campy movies are the 1982 musical The Best Little Whorehouse in Texas, starring Dolly Parton as the Madam and Burt Reynolds as the local Sheriff, and Don Coscarelli‘s horror-comedy, Bubba Ho-Tep, where Bruce Campbell plays a geriatric Elvis stuck in a retirement home plagued by a soul-sucking Egyptian mummy. If I ever go on that road trip to Texas I’ve been meaning to take for the last 10 years, Dollywood and Graceland will be stops on the way. 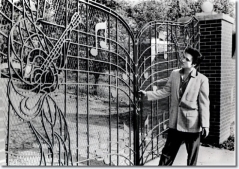 Graceland opened for business in 1982, five years after Elvis’ death, but as much like a theme park as the Jungle Room might make it seem it’s basically a historical landmark and museum. There’s a gift shop and all kinds of memorabilia on display, and a large portion of the estate is off limits to the public. For years it was also a weird combination of deserted and occupied because Elvis’ Aunt Delta, who he’d invited to stay after her husband died, continued to live there until her own death in 1993.

Another way that Graceland is unusual is that the King is verging on a religious icon, including numerous sightings and claims that he’s still alive. For some people it has become a kind of pilgrimage site. The question of where he could be now if he actually weren’t dead is answered in a very entertaining way in Bubba Ho-Tep. Elvis is stuck in the Shady Rest Retirement Home in East Texas. Tired of the drugs and pressures of being the King, he claims he traded places with an Elvis impersonator named Sebastian Haff for a chance at a normal life. Unfortunately for him, the proof that he was the real Elvis went up in smoke, along with any possibility of regaining his former fame and fortune, when he accidentally blew up his trailer while BBQing.

Based on a novella by Joe R. Landsdale from the anthology The King Is Dead: Tales of Elvis Post-Mortem, the plot revolves around a contraband ancient Egyptian mummy that ends up dumped in a river near the retirement home, surviving by feeding on the souls of the residents. Walkers and wheelchairs notwithstanding, the aged Elvis teams up with an equally aged, black John F. Kennedy played by the late, great Ossie Davis (for the explanation of that one you’ll just have to watch the movie) to try and take the mummy down. Campbell and Davis are fantastic together, and both the concept and execution are a lot of fun.

Elvis died the same year The Best Little Whorehouse in Texas came out, but the most famous song from the movie – Dolly Parton’s hit, I Will Always Love You – was first recorded in 1973. Elvis loved it and wanted to cover it, but his agent, Colonel Parker, insisted that Dolly would have to sign over 50% of the rights. She refused, so he never did. She told Parker that she had written and recorded the song, and that the money she made was to be handed down to her family so she couldn’t give that up. After Whitney Houston covered it in 1992 for the soundtrack to The Bodyguard, Dolly joked that she made enough money to buy Graceland.

Dollywood brings being a living icon to a whole new level. It’s a 150 acre “family theme park”  located in Pigeon Forge, Tennessee, near where Dolly Parton grew up. One of her goals in investing in the park was to create jobs and have a positive impact in the community she came from. It’s an interesting twist on philanthropy because even though it is a way of giving back, you can’t really pass Dollywood off as selfless. It employs roughly 3000 people and incorporates elements of the local Smoky Mountain music and culture, but it also has all the usual fair ground attractions like roller coasters and log rides, as well as the Splash Country Water Adventure Park.

It also has the Smoky Mountain Home, which is a replica of the cabin Dolly grew up in, and two Dolly Parton museums: Chasing Rainbows and Rags to Riches: The Dolly Parton Story. The Chasing Rainbows museum is full of Dolly memorabilia such as costumes and awards, including the cap and gown she received with her honorary doctorate from the University of Tennessee in 2011. It leaves me wondering whether this is something that has happened at other points in history, or whether it’s a uniquely postmodern idea to participate in a museum or attraction dedicated to yourself?

Maybe the level of fame where you become a cultural icon makes your life basically a living attraction anyway, constantly curated and on view to everyone who cares enough to want to be a part of it. It’s both fascinating and admirable to me that Dolly Parton has managed to take the kind of massive pressure and scrutiny that ultimately lead to Elvis’ death (or in an alternate reality, landed him in the mummy-infested halls of Shady Rest) and make herself a part of it so successfully with Dollywood. When I think of the scores of starving artists throughout history who weren’t appreciated while they were alive, why shouldn’t they get to enjoy it?

Rule of thumb: waiting until after you’re dead is a losing proposition.