A lot of people my age have vague memories of a Star Wars holiday special back from some time in the 1970s, but beyond that their memories go blurry. Maybe they recall it had something or other to do with wookiees, but specifics are difficult to drag up from the recesses of the mind — and not without good reason. In my circle of friends, it was referred to simply as A Very Wookiee Christmas, and the search for a copy was nearly as furious as our search for a copy of Bruce Lee Versus Gay Power. Nowadays, for better or for worse, you can just pop onto Youtube, or any number of torrent sites, and download a copy of The Star Wars Holiday Special — or Bruce Lee Versus Gay Power. But in the early days human civilization (the 1990s), such searches were far more complex. The quest for Bruce Lee Versus Gay Power lasted years, and when it finally ended in success, the film proved very quickly that none of the effort had been worth it. The search for The Star Wars Holiday Special was similarly involved, and when it finally culminated in my possession of a VHS copy, I soon discovered I was better off with Bruce Lee Versus Gay Power.

The show aired as part of the Thanksgiving season in 1978. During the holiday season, there would be a glut of themed specials which consisted mostly of Donnie and Marie Osmond singing, then acting surprised when special guest stars stopped by the family room set for a visit. “Who could be at the door on Christmas Eve? Why, it’s Tim Conway!” followed by the requisite applause being piped in. When we caught wind of there being a Star Wars holiday special, the children of America wept sweet, sweet tears of joy, which George Lucas actually harvested and turned into money. The prospect of spending the holidays with the cast of Star Wars was wonderful. Finally, instead of David Madden, Alan Sues, or Henry Gibson dropping by for a visit, it would be Walrusman or that Imperial guy with the big muttonchop sideburns. 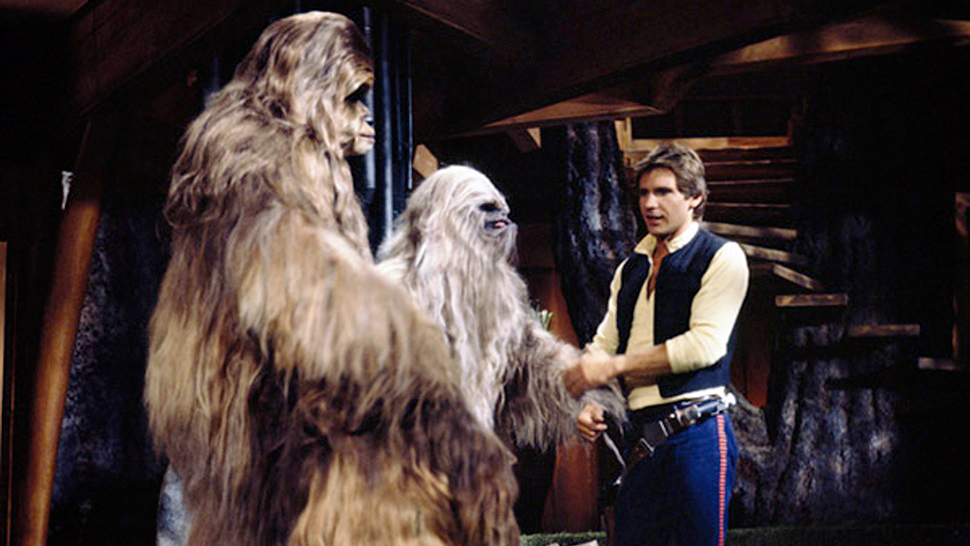 Plus, it would answer a question I’ve had since I first saw Star Wars: what do they do when they’re not, you know, star warring? Is Darth Vader’s average day spent filling out paperwork, doing photo ops, and dealing with new zoning laws? I mean, the guy has an empire to run. And how come in space, no one has television? In Star Trek, it’s because they’d all rather get together and read poetry or listen to Data’s violin recital. But surely Han Solo enjoys kicking back and seeing what’s on TV once in a while. Mostly though I wanted to see Darth Vader decorating a Christmas Tree and going, “Who could that be at my airlock door? Why, it’s that guy with the big long nose who ratted out Han Solo at the cantina!”

Well, the holiday special would answer all our questions in excruciating detail about what Star Wars people do when they’re not shooting blasters and posing for action figures. 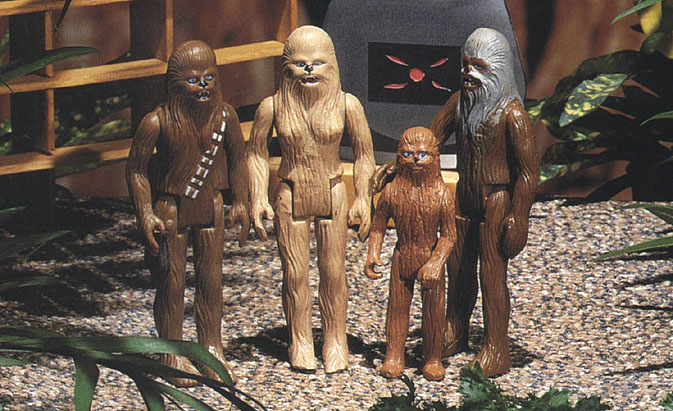 It’s all about Chewbacca’s struggle to return to the wookiee home planet. Only it’s not about Chewbacca at all. Almost the entire two hours of the special focuses on Chewie’s family. There’s his wife Molla, who is worried that her husband won’t make it back in time for Life Day, the most sacred of all wookiee holidays, and who keeps hassling Chewie with trivial domestic gripes while he is in the middle of being shot at by the entire Imperial armada (on the other hand, why does Chewie keep picking up the phone?). There is Itchy, Chewbacca’s father. You remember that ugly orangutan monster from Big Trouble in Little China? Well, he looks like that. And then there is Lumpy, Chewbacca’s son who looks like that annoying brat from Eight is Enough. I swear!

While they wait for Chewbacca to get home from his life of running guns and breaking the law, the Chewbaccas amuse themselves in all sorts of ways. Molla frets in the kitchen and watches a really long cooking show which we also get to watch. Itchy takes in a little wookie porn. That Itchy does this right in front of his family is what’s more disturbing. Lumpy innocently plays with his stuffed bantha. Lord knows what Itchy would do if he got a hold of that. Keep in mind that the entire show, which up until now seems to have been about fifteen hours long, has been performed in wookiee, with lots of lame community theater arm-waving and pantomime. In order to inject some English into the special, the Chewie family is visited by their old friend. Who could that be at the door on Life Day Eve? Why, it’s Art Carney! Weak applause. That’s actually just as bad a guest appearance as Dave Madden and not nearly as satisfying as if it had just been Sammy Davis Jr. or Paul Lynde.

Art Carney hangs with the Chewies and brings Lumpy a hologram of some Cirque du Soliel meets The Moomenshontz sort of thing. So for about ten minutes we get to watch people dressed as chickens do flips. No wonder Chewbacca left this dump. The wookiee home planet is boring, and I’m beginning to think wookiees are boring, too. I always figured wookiees would get rowdy and play polo with the heads of their enemies like in The Man Who Would Be King. If what we see from Chewie’s family is any indication, then it’s no wonder The Empire conquered wookiees so easily. By comparison, even Ewoks seem fierce. I’m beginning to think that the whole thing about wookiees pulling people’s arms out of their socket is just a front. They seem more likely to take you off to the side and explain to you, possibly through some sort of modern theater performance, how you’re really hurting their feelings.

To remind us that we are in the Star Wars universe, we occasionally cut to Han Solo and Chewbacca aboard the Millennium Falcon trying desperately to outrun stock footage of star destroyers.

Molla places a call to Luke Skywalker, who is really dolled up with eyeliner and is working with R2-D2 on his space ship engine, which is sitting out on blocks. Thus Luke becomes much like the white trash guy in my old neighborhood, who had the engine for his Mustang sitting on blocks in the front yard while he worked on for what seemed like years. I guess Luke is from a small rural planet, so it only makes sense. Luke reassures Molla that Han and Chewie are probably just dead drunk with a couple of three-breasted hookers in some space cantina. 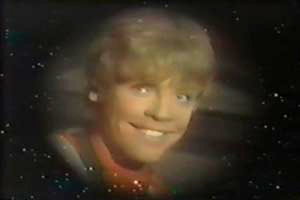 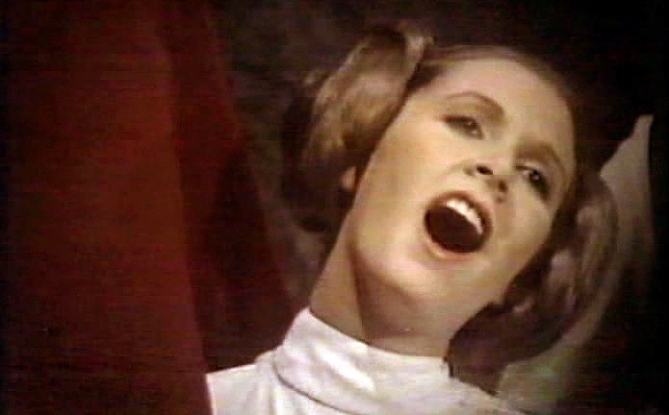 From time to time, storm troopers also stop by to hassle the Chewies. Luckily, Art Carney wows them with another little hologram, this one of the band Jefferson Starship. So we get another five minute guest performance as the band, dressed like jaunty space harlequins, performs some droning song (even more so than their usual stuff) that is apparently a big hit with stormtroopers. Itchy, in the meantime, watches cartoons, which are for some reason about Luke, Solo, and the rest of the gang. The cartoon, which is drawn in a weird style that reminds me of some of the stuff in Heavy Metal magazine, is notable only because it introduces the character of Boba Fett. All in all, you have to wonder about the Empire. Can they really be so bad if they allow people to broadcast animated features about the sworn enemies of the government? If they were as evil as we’re supposed to find them, they would have made everyone watch Gran Moff Tarkin explain the benefits of big sideburns on Imperial officers.

You were probably thinking, “This all sounds really good, but what we really need is a rousing cabaret number with Golden Girl Bea Arthur.” Well, you got it, buddy! Cut to Tatooine and the famous Cantina at Mos Eisley space port. Bartender Bea Arthur rips into a rousing torch song with the cantina regulars, who may be wretched scum and villains but are still way into melancholy cabaret acts. These scum and villains do a lot of hugging and back patting and misty-eyed looking off into the distance while talking about how times just aren’t simple anymore, and sometimes we have to bid farewell to fond friends and memories. I know bad guys can get nostalgic and do soul-searching sometimes, but do we really need to see Greedo knocking one back and going, “Yeah, I used to be somebody.” 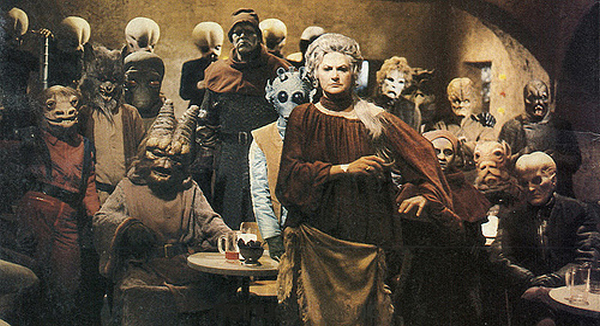 So after an endless parade of wookiee cooking, wookiee porn, Bea Arthur musical numbers, Jefferson Starship, holograms of clowns, and wookiee arm waving, Chewbacca finally gets home, which allows Han Solo to hug a lot of wookiees. But wait! Who could be knocking on the door on Life Day Eve? Why, it’s Luke Skywalker! And here’s Princess Leia looking all whacked out on space cocaine. And C3PO because why not! Life Day consists of a bunch of wookiees loitering at a tree for about five minutes while Princess Leia belts out a song set to the tune of the Star Wars theme that reminds me of that Saturday Night Live skit where Bill Murray sings the Star Wars lounge song. The only real difference is that Carrie Fisher performs with glazed eyes and a stare far more distant than even the one Luke used when he gazed off with yearning for adventure at the two setting suns in the desert skies of Tatooine.

Pretty much everyone considers this a black eye on the handsome face of the Star Wars franchise, though I at least enjoyed it more than Phantom Menace. In fact, given the bruising that the franchise has endured with the atrocious prequel films and George Lucas’ refusal to release the original three films on DVD without his latter-day digital tinkering, the Star Wars Holiday Special is fast becoming among the least embarrassing of the growing number of Star Wars foibles. This review maybe makes it sound like it’s so bad it’s good, and in some ways, I guess it is, but in most other ways, it’s sort of like putting live hornets in your butt. Now we know why we all blocked the existence of this movie from out collective consciousness, relegating it to the distant nether-regions of vague recollection, sort of like that song, “What Do You Get a Wookiee for Christmas When He Already Has a Comb?” 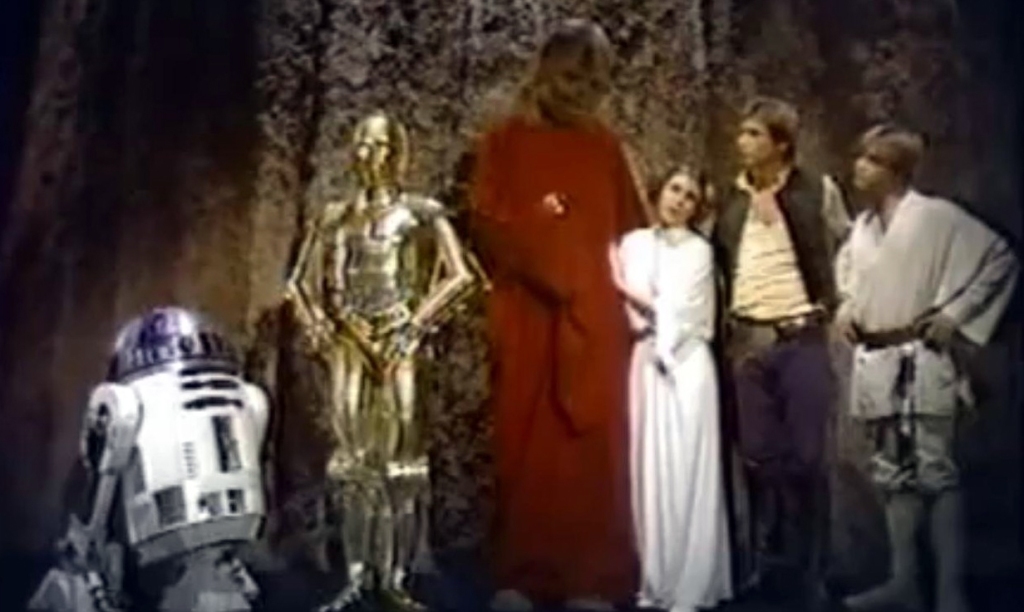