In the season one finale of AMC’s new series Halt and Catch Fire, the builders of the Cardiff Electric portable Giant computer gather around a conference table to read an unenthusiastically positive review of their new product. It is an unwittingly apt reflection of my reaction to the show in general. What was touted, or at least what was expected to be, 1980s Mad Men with Computers ended up being just good enough to get me through the season relatively satisfied, but it never really clicks. It’s primary problem for me is the same problem I have with a number of shows: it is unwilling to commit to any emotion beyond reserved grimness.

Nothing good can ever happen to the sad sack quartet of Joe McMillan (Lee Pace), Cameron Howe (Mackenzie Davis), Gordon Clark (Scoot McNairy), or Donna Clark (Kerry Bishe). Every minor victory, every shred of happiness these four might attain in their quest to build a portable clone of an IBM computer in the wild, early days of microcomputing, must be countered by a sledgehammer negative consequence. Every tiny victory must be followed the very next scene by a mental breakdown, a betrayal, a professional disaster, or even just a bloody kitchen accident. It soars past Shakespeare into the territory of pure Greek tragedy as each Sunday night, vengeful gods strive to grind these four people into oblivion, and along with them, the viewers.

When AMC started promoting the show, people were led to think of it as a replacement for Mad Men, which decided that there should be a year hiatus in the middle of its final season. After all, Halt and Catch Fire was another period piece set in a decadent, out of control time — the 1980s. It’s lead characters were a slick but haunted salesman, a nervous but brilliant engineer and whipping boy, a brash but insecure punk rock coding savant, and a housewife whose own engineering brilliance is frequently pushed to the back burner because of condescending male bosses and the requirements of raising two children. It’s easy to see Joe McMillan as Don, Gordon as Peggy, Cam as..well, I don’t know. Some strange combination of Ted Chaough and Stan? And Donna Clark as Megan Draper, the one person who is too cool and too kind-hearted to associate with this gang of abusive lunatics.

And unlike the world of Mad Men, which is a fantasy (though not necessarily a pleasant one) world because I am not old enough to have lived it (I have only lived the Ultra Lounge box set, swingin’ revisionist look back at it), Halt and Catch Fire takes place in the decade in which I came of age, and in a space –the intersection of hobby and business computing — with which I am intimately familiar. I was a terrible programmer, but I loved taking apart and putting together hardware, struggling with drivers and having to rearrange jumpers on a motherboard just to get a damn printer to work. I was a junkie blasting Black Flag and Kraftwerk (well, as much as you can blast Kraftwerk) while watching bits of data stream back and forth through phone lines at the incomprehensible speed of a 1200 baud modem. I was fascinated by the nascent computer underground, by 2600 and Phrack and clandestine BBSes where you could download plans for perpetual energy machines or a copy of the Principia Discordia. The idea that you could take all these chunks of silicon and metal and copper, and somehow arrange them in a way that suddenly let’s you play Colossal Cave Adventure or Zork still amazes me (but then, so does cake — what person thought of mixing all that stuff together, and did they expect the delicious outcome? Alchemy!). Simply put, every single thing about Halt and Catch Fire seemed designed to appeal specifically to me.

And it did appeal, sort of. I watched every week. I forged ahead even as the show seemed determined to beat every single character to a pulp, to let no good deed go unpunished. To exhaust me with a relentless dedication to grimness the likes of which I haven’t seen since the last dismal DC Comics movie. Partway through the first season, with Joe freaking out and smashing something yet again, with Cameron having another petulant outburst, with Gordon making me wonder when he becomes a serial killer, I realized I wasn’t watching something influenced by Mad Men. I was watching something influenced by Game of Thrones.

The thing Mad Men does that Halt and Catch Fire does not is allow for the full range of human experience, with the patience to let characters absorb these experiences. Writers tend to dwell on the existential ennui of the show, but people in Mad Men are allowed to succeed. They are allowed triumphs both personal and professional, and they are allowed to bask in those triumphs, sometimes for several episodes. Hell, Don spent almost an entire season happy and successful after he married Megan. By contrast, Halt and Catch Fire cannot wait to kick its characters in the face. Gordon celebrates success by buying a new car and is immediately carjacked. Everyone is happy to ship their new computer, then Joe sets the delivery truck on fire. Donna and Cameron start to bond, then someone discovers an insult. While this is interesting at first, it quickly becomes tiresome. Why care about any of these characters? Why invest any emotion in what happens to them when we know every single thing will be terrible? What’s the point? Don Draper’s “Carousel Moment” is something people still talk about and remember vividly. Halt and Catch Fire is so anxious to drag its Don Draper through the mud that it can’t take the time to halt and let things catch fire.

The unwillingness of the show to be anything but utterly, unenergetically downbeat is, I think, part of the reason its ratings have tanked. We do not need endless happy unicorns dancing in poppy fields, but we do need a range of human feeling. Drunk Don Draper watching TV in his underwear while eating a whole box of Ritz crackers is only effective because we’ve seen glorious Don, triumphant Don. This notion that, to be realistic or mature or edgy means you have to be unwaveringly grimdark makes for a lot of boring entertainment. A show composed of nothing but Pete Campbells would just be intolerable. And it’s a shame, because beneath the veneer of dispassionate misanthropy, Halt and Catch Fire has the potential to be a really great show. Joe’s mental instability, his bisexuality at a time (and in a place — the show is set in Texas) when that could destroy his career (to say nothing of the show’s single hint that an ex-lover of his might have some unexplained new disease), his drive to endlessly create even though he’s not creative — these are the makings of a great, complex character. 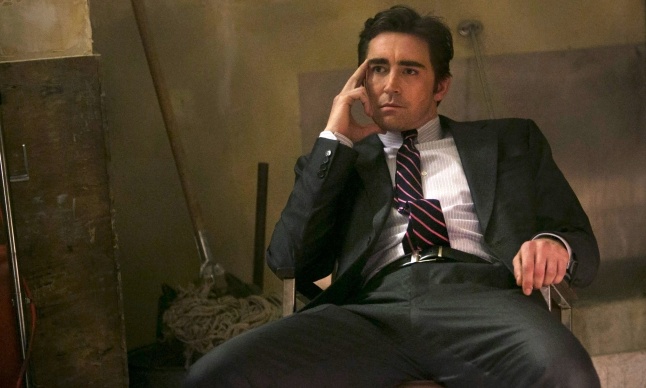 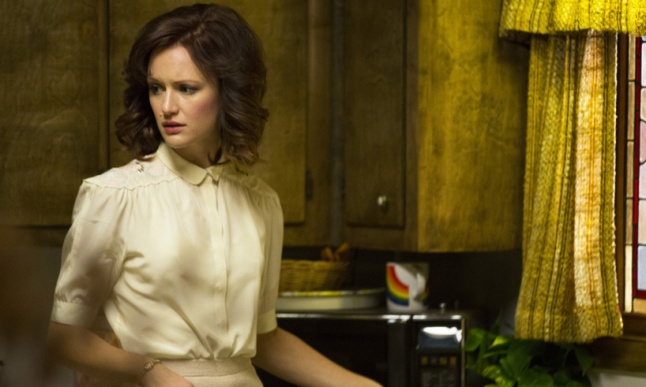 The season leaves the endlessly put-upon and equally unstable Gordon (he once tried to soothe his children’s fears by running wild-eyed into the back yard and maniacally digging a hole in search of the legendary Cardiff Giant) in the unfamiliar role of being in control of the company, possessed of what looks to be a successful and innovative product — and absolutely no idea what do to next. Because he is an engineer, not a marketing visionary. The Jobs-Woz dynamic between Gordon and Joe is unmistakable, and it plays off the uncomfortable place where tech hobbyists have to deal with the realities of tech business. Rather than another emotional gutting,that final shot of a freshly shaven, expressionless techie in a suit sitting at an empty conference room table is a moment of reflective ambivalence that lets the viewer feel hope as well as trepidation.

And Donna, who begins the season looking like a supporting character but ends up on equal footing with the three leads, is fascinating. She is the character with whom I most identify, as someone who slowly shed his love of this world in pursuit of other things but still feels pangs of loss for soldering motherboards and tinkering with .BAT files. A brilliant (in that regard, I don’t relate to her) computer engineer who put her geek-rebel past behind her to be a mom, but who finds both intellectual satisfaction and a budding uncomfortable camaraderie with young female programming wiz Cameron — those two provide the season’s only real, lingering moment of happiness, when Donna leaves her crap job getting kicked around at Texas Instruments to join Cameron and her house full of oddball young hackers and computer cowboys in creating a start-up company. And that lingering moment of feeling positive about the show might have happened only because that’s where the episode, and the season, ended.

But it illustrates my point. There are great characters and a great show struggling to emerge from the weight of the season’s hatred of its own population. The setting is good. The actors are committed (Lee Pace is the most broody brooder in the history of brooding; must be the eyebrows). The season finale — which could very well be the series finale — was the best episode since the last episode anyone was allowed to linger within the glow of success (and that was during the first episode). AMC has shown itself willing to let a show find its footing before panicking and canceling it (Breaking Bad is the quintessential example), so perhaps there will be a stay of execution for Halt and Catch Fire. Lukewarm though I may sound, I would like to see the show come back for a second season, provided the writers lighten up on the endless abuse and refusal to let their characters succeed. Let them breathe. Let them win as well as lose. Let them have their Carousel Moment.