It is common for a television series to run a particularly spooky episode around Halloween. Even horror or supernatural themed shows put a little extra effort into things when October 31st stalks toward us. And while it may have been a wisecracking space adventure clad entirely in billowing blouses (for the men) and skintight shiny jumpsuits for all, Glen Larson’s Buck Rogers in the 25th Century was no different. Except that it’s Halloween episode aired in January. But hey, close enough right? And when your episode pits an unusually somber Buck Rogers (Gil Gerard) against space Count Orlok, well, that sort of thing plays well any time of year.

For the overwhelming majority of its two seasons, Buck Rogers was a generally breezy affair. Gil Gerard would wear a chest-revealing silk shirt and crack wise. Wilma would be confused. Twiki would crack wise. Dr. Huer would be confused. Then they’d probably show the footage of the star gate and one of the fighter ships flying through an explosion. Throw in Markie Post in a shiny jumpsuit and paycheck cashing guest star, and you had just about everything you needed. Which is why “Space Vampire” is such an oddball entry into the otherwise goofball canon.

As the episode opens, Buck and Wilma are en route to an episode that would have been called “Vegas in Space” or “Cruise Ship in Space” or “Swingers’ Colony in Space” if they’d made it to their destination. Instead, a pit stop to drop Twiki off at a remote space station (sadly, not for good) ends up with Buck and Wilma stuck on the station when a derelict freighter smashes into it. What no one knows except Wilma is that the dead crew isn’t really dead, and they weren’t killed by a space virus; they were the victims of Space Nosferatu, here known as a Vorvon. Unfortunately, Wilma doesn’t know what she knows; she only senses an evil presence that causes her to hug herself constantly and looked distressed. An unfortunately for Buck, this isn’t one of those pretty, naked space lady vampires. When station crew start dropping dead with mysterious marks on their neck, and with no one else accepting that it’s a space vampire rather than a virus, it’s up to Buck to save the day. 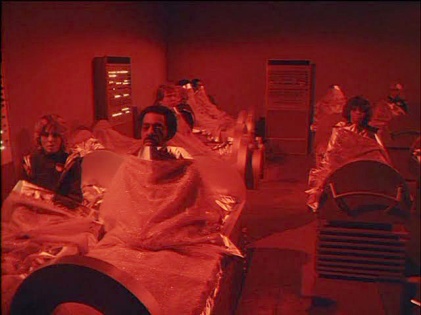 Surprisingly few people in this age of nostalgia and “every single thing ever I remember from my childhood was the most awesomest thing ever” think back fondly to Buck Rogers. I love the show, but then, I also love the Logan’s Run television series, so can I really be trusted? Anyway, among those who do still enjoy the wacky hijinks of that primitive 20th century man in a post-apocalyptic disco future, a few episodes stand out as particular favorites. The pilot, of course, which Is aw in an actual movie theater, and the one where Wilma wears a short toga and gets trapped in a steam room prison cell. The one where Buster Crabbe, who played Flash Gordon in the old serials, shows up with Peter Graves and Woody Strode. And looming above them all, making menacing hand gestures and snarling, is “Space Vampire.”

The episode was an homage to the classic silent era tale of terror, Nosferatu, and the space vampire of the 25th century looks like…well, he looks like something a makeup artists came up with after having had the ghoulish Count Orlok described to them rather than actually seeing Orlok for themselves. This Vorvon resembles Orlok crossed with that Outer Limits guy who wanted to serve man, and then even though they wouldn’t debut for a few more years, one of the Ferengi from Star Trek: The Next Generation. The hair on Orlok’s famously tufted ears has migrated to his eyebrows, and the ears themselves have grown and look only haphazardly attached to the rest of the giant head. Still, he has hypno eyes that make arcade game noises when he uses them, and actor Nicholas Hormann may look camp, but he handles the role seriously and with a pretty fair degree of menace. I am sure if I saw something that looked like the Vorvon making “vampire fingers” at me from across the space cocktail lounge, I’d be pretty terrified.

Really though, it’s the overall atmosphere of the episode that makes it stand out. Although not a cheap show, Buck Rogers relied on plenty of cost-cutting measures, which meant that the direction, sets, and overall look and feel of the show was usually pretty consistent. In “Space Vampire,” however, things get weird. I mean, weirder than usual. Director Larry Stewart, who himself logged time in a science fiction serial (Captain Video, Master of the Stratosphere), employs hand-held cameras moving ominously down corridors. The usually bright interiors of the show are replaced with dark corridors, shadows, and flickering lights. There’s a guy named Helson. The dead rise slowly from their medbay slabs and stalk the living. Buck’s desperate (and awkward) karate fight with a gang of zombies controlled by the Vorvon is a pretty tense affair as well. While it may not quite be spooky, “Space Vampire” is a pretty enjoyable foray into strange territory for Buck Rogers. 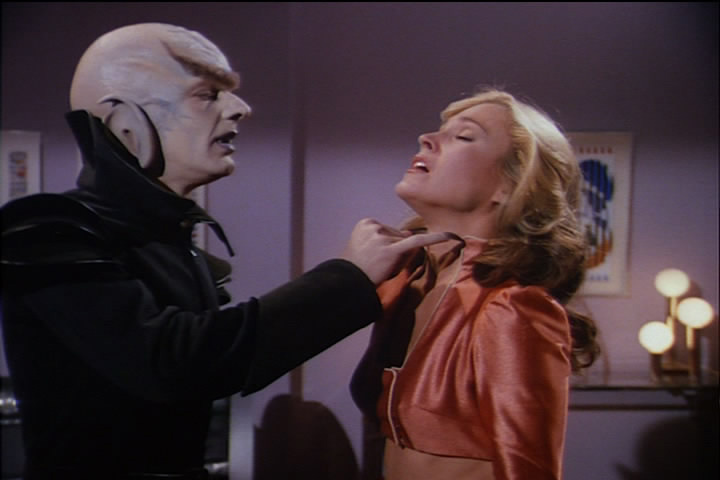 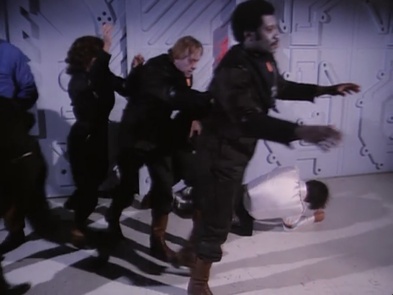 If I have any complaint about the episode, it’s that it reduces Wilma to frightened damsel in distress. I understand that, true to the form of old horror movies and the story of Nosferatu (or Dracula), she will fall under the sway of the evil master of the undead, but in the interim we could have done without so much clutching of her own arms and distressed staring. I like my Wilma slinging a blaster and cocking an exasperated eyebrow at the antics of Buck and Twiki.

I always enjoy when a television episode steps out of its usual mode and delivers an attempt at a spooky Halloween episode, even if those episodes don’t air during Halloween. There was an episode of The Incredible Hulk that scared the heck out of me, something about Hulk having to fight his way through a carnival spookhouse. And then the one-two punch Starsky and Hutch delivered, fighting vampires one season and sullen devil worshippers in another. And while Buck Rogers’ salute to Nosferatu may be my favorite of these very special episodes, the scariest, the one I remember keeping up, terrified, at night? That episode of The Waltons where the house is besieged by a poltergeist. When the Raggedy Anne doll starts flopping about on its own? No thank you, sir! I’d rather face a Vorvon.