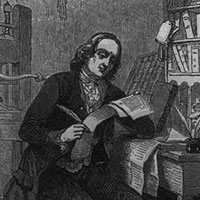 Impatience is a trait that can be irritating, both in other people and oneself, and often results in disaster. In one of my previous articles, Don’t Be That Guy, I used the term “incapacitatingly impatient” to describe all the crazy things people do because they can’t bring themselves to wait long enough to make a choice that’s reasonable or considerate. One of the commenters aptly called it out as “the disease of our age.” Comics editor Carol Borden’s theory about teleportation is that if we were able to teleport places in 10 seconds but it took 20 seconds instead, we’d be tapping our feet impatiently wondering why it was taking so long.

In the context of action-adventure films, impatience serves a narrative purpose. It drives action. If the protagonist spent time rationally weighing out the options rather than jumping into motion, the movie would be less Indiana Jones and more like a bio-pic of Benjamin

Franklin sitting at his desk composing a pros and cons list, or an illustration of the Hobbesian philosophy that life is nasty, brutish and short. No one wants to watch an action movie where the protagonist is Rational Economic Man. (Of course, having said that, I immediately started envisioning how that could be entertaining. Are action movies anathema to that philosophy, or do they embody it in some way I haven’t considered?)

I’m especially thinking of the kind of action-adventure films with fantastical elements, like Indiana Jones or The Mummy, where abandoning what is commonly considered “rational” in favor of supernatural explanations is part of the challenge. Arguably the protagonist behaves the most rationally, accepting what they’re actually seeing and reacting to it, and their impatience is with everyone else’s slowness to accept the new reality on the grounds that it wasn’t dreamt of in their philosophy. If they make truly foolish choices or impetuously ignore information that is clearly available to them within the narrative, then they become unsympathetically irrational, but half of the things that happen in the movie would never be set in motion if the heroine or hero weighed out all the possible outcomes before rushing headlong into dark tombs after the treasure, each other, their brother, the dog, Imhotep, etc.

I’ve always been partial to a healthy dose of impatience in historical heroines, largely because they have so very much to be impatient with. From the sheer number of them in existence, I think it’s safe to say that I’m not alone in this. One of my early encounters with the archetype was in Elizabeth Peters’ historical mystery series about Amelia Peabody

, an intrepid and unconventional Victorian Egyptologist who makes her way through a series of adventures armed with quick wit, a small fortune, and a steel shafted parasol. Another heroine that comes to mind is the French comic book character, Adèle Blanc-Sec. It’s possible I made these connections in part because of how little patience Amelia Peabody, Evelyn Carnahan (from The Mummy), and Adèle Blanc-Sec have for ornery camels.

The Extraordinary Adventures of Adèle Blanc-Sec (2010) is an entertaining and absurd adventure film based on Jacques Tardi‘s 1970s comic book series, but with less inadvisable nudity (ie. in the midst of a flock of pterodactyls). Set in Paris circa 1912, the plot revolves around Adèle’s plan to revive her sister from a coma by resurrecting Pharaoh Ramesses II’s personal physician with the help of Professor Espérandieu, who has

been experimenting with parapsychology. Meanwhile, the Professor has telepathically induced the hatching of a 136 million year old pterosaur egg and the mummy turns out to be the Pharaoh’s physicist rather than the Pharoah’s physician. Madcap antics ensue as the pterosaur terrorizes Paris, the Professor tries to hide it from the police, the police dress up like sheep to catch it, and Adèle attempts to corral mummies into reviving her sister.

Adèle is a famous travel writer much like Indiana Jones is an archaeology professor – it pays the bills and it’s an excuse for adventure. It’s also an excuse for ignoring social conventions she has no interest in living by. She’s fast-thinking, quick-acting, and more than willing to literally push people out the door if they’re holding her up. Whenever the various men she encounters are slow on the uptake about whatever it is that she feels needs doing, she rolls her eyes, rolls up her sleeves, and shows them how it’s done. She’s definitely of the “act now, apologize later” school, except for the part where she’s not very interested in apologizing. She’s more interested in arguing her way out of it later if necessary.

In addition to the intensity of her motivation to save her sister, her impatience seems to stem from a combination of being clever enough to come to conclusions faster than other people, and the competence, will, and nerve to turn that into decisive action while they’re still thinking it through. Sometimes it’s hard to tell whether she’s being impetuous or if her mind is just racing far enough ahead that she actually doesn’t need much time to assess a situation and arrive at a reasonable conclusion. In any case, she has no shortage of people who admire her adventurousness, intelligence and skill.

As is often the case though, all her clever plans go awry and the faster she acts, the further things go off the rails. The less time she takes to think or sleep or eat, the worse it gets. It’s not until she gives up trying to force everything into shape and sits down to tea with the mummified physicist that a solution presents itself. It shares many of the elements of her plan, but rather than coming together the way she planned them, they kind of slide into place when she’s not looking. Maybe it’s because she’s stopped

rushing around long enough to pay attention to what’s happening and move with it rather than against it. Maybe it’s that magic is more ornery than the most ornery camel, and simply will not go in any direction but it’s own. Or perhaps it’s just a natural side-effect of tea and cakes.

alex MacFadyen is pleased to share with you the awesomeness that is Miss Sanderson, a highly regarded Edwardian fencer who taught Parasol Self Defense to women at the Bartitsu Club in London. Her methods are described in this 1908 article entitled The Defeat of the Hooligan.