Whatever Happened to Saturday Night?

I was fifteen, pulling the ol’ “spending the night at a friend’s house” scam so I could sneak off and indulge in the sundry sins the big city offers to a country boy with a twinkle in his eye and about nine dollars in his pocket. I bummed a ride into town with a friend, C. Our destination was the parking lot of Louisville’s Vogue Theater, the go-to hang-out for aimless weirdos, punks, new wavers, and arty types. Our intention, besides parading around and making the scene, was to see The Rocky Horror Picture Show. I’d been preparing for this trip for days, laying the groundwork that would allay any potential parental suspicion of me being out with a bunch of oddballs way past curfew and assembling an appropriate outfit. With very little in the way of codified punk rock to guide me, I had my own interpretation of what was appropriate attire for such a sojourn — which was a t shirt sliced open in the back and stitched back up using a dirty old shoelace. I then wrote “Joy Division” on the front using a bright neon pink glitter puffy paint pen, because I thought that was a clever subversion of the gloomy melancholy one expects. I thought about fashioning some manner of Dracula cape, but it never came together. Finished off with a pair of ripped up jeans and a lot of Dep hair goo, and I was lookin’ cool. Or lookin’ something.

In C’s rickety VW Rabbit blasting a Siouxsie and the Banshees cassette on a portable jam box, we pulled into the parking lot around 10pm. The movie, of course, went on at midnight. But there was fun to be had beforehand. Already, the sidewalk and parking lot was littered with the people I was learning I wanted to call my own. Spooky death rockers, a couple towering transvestites, rambunctious kids from the performing arts school downtown, lots of punk rockers and queens and lesbians. A few old schoolers who had been coming since who knows when, but most of them didn’t bother to show up that early in the night. We were a jumbled mix of scummy and strange and awkward and silly and glorious and glamorous.To make the scene meant to stand out. You weren’t measured by how much you fit it but by how much you stood out. There was no need to wear what you commodified, to signal your membership in the tribe by making sure the products you consumed were displayed on your t-shirt. No need to reassure “I am one of you by looking like all of you.” Instead, it was “I am one of you because we look so fantastically different.” Be a Frankenstein. Stitch a loony, unique ensemble together. This was Kentucky, after all. We didn’t have Fiorucci.

I was an unsophisticated but excited small town hick being introduced around by C. I like to think people admired my shirt, but I am not sure about that. Around 11:30, they started letting us in. I flowed with the rest of the crowd, clutching C’s hand lest we get separated (and because who doesn’t want to hold hands with a pretty new wave girl?). It was a gloriously weird and flamboyant group of people just making up whatever fantastic shit they wanted to claim as their look and their identity. We made our way into the auditorium and secured ourselves seats a few rows back in the middle aisle. We didn’t stay there for long. Like many screenings around the country, the Vogue they prefaced the movie with two music videos: Tim Curry’s “Paradise Garage” and Meatloaf’s “Bat Out of Hell.”

During the latter, the audience would rush the old wooden stage, gather around it, and begin pounding on it as Meatloaf’s gloriously bombastic song played. Once again, I found myself swept along, beating the stage next to a girl about my height, maybe my age, with short platinum blonde hair and copious black eyeliner. She was wearing a baggy white men’s dress shirt over a short frilly black dress, torn-up white stockings, a black tie and black lace gloves. As one body, that bunch of misfits, thrill-seekers, and whatever else allowed themselves to be swept up, pressed together. I found myself holding the hand of the girl as we slammed the stage together. It was the first and last time I ever saw her, but for a moment, we had always known each other and always would.

As the audience trickled back to their seats, the cast took the stage and the iconic red lips took the screen. There’s not much need to recount here what the subsequent 100 minutes held for me. I knew vaguely what to expect — had seen pictures, had the audience participation described to me. But of course, that’s nothing like being there, sweaty and jittery and as excited as I’d ever been in my life, seeing this parade of insane stuff on screen. Being part of the parade of insane stuff in the audience. My record on tolerance is not perfect, but such as I have achieved in that regard during my life probably stems from seeing The Rocky Horror Picture Show and, more so, being exposed to the crowd that would gather on on those Saturday nights to celebrate being weird. Before that, even as I was beginning to dig into punk rock culture, I was perfectly happy to make jokes at the expense of gays and lesbians and people of other race, an ignorance that was, at the time, pretty mainstream in its acceptance. That all changed when a transvestite from another galaxy, who shared the same love of classic science fiction and horror as me, stepped out of an elevator.

I realized then it’s OK to be weird. Hell, it’s preferable to be weird. To want something outside of the norm or to be something outside of the norm. That being unacceptable can be perfectly acceptable. To give in to temptation. Suddenly, I wanted to be part of that world, rather than someone who joked about it. I loved it, that gaudy, glitzy procession of perversion and joy and garter belts and corsets. I didn’t have any desire to become a cross-dresser, but I certainly wanted to live the sort of life where I counted them among my friends, along with all the other strange people I was seeing. And the strange person I was becoming (or had always been). I walked away from that screening with a deep sense of identification with Susan Sarandon’s Janet, who finds herself thrust into this strange, sinful, unfamiliar world and, rather than being aghast, finds it a blast. I wanted to be like her. I didn’t want to be a scifi fan as much as I wanted to be scifi. I mean, when Klaus Nomi took the stage, he didn’t look like a science fiction fan; he looked like something out of science fiction. That’s what I wanted. Not to dream it, but to be it.

Rocky Horror also opened my mind to how much more science fiction could be than what I expected at that point (which for had been mostly Earth vs. the Flying Saucers and Star Wars). I still loved those pulp aspects — and still do. But there was room for more. Science fiction, I realized, should a massive tent. It could be sexy, deviant, anti-establishment, lingerie-clad and full of Bob Fosse razzle dazzle. It could explore different themes, different cultures — alien cultures, even if they weren’t all that alien. It could be different, and in doing that, could make some sort of difference. That difference didn’t even have to be overt; the mere act of glamming it up and having fun was itself a rebellion, especially in a city that wasn’t exactly a bastion of acceptance when it came to the queer lifestyle and people who didn’t want to just keep their head down and blend in regardless of what they might be inside. Perhaps an oddly serious revelation for such a camp production, but then, wasn’t camp really a way for the marginalized to find a place in the society that rejected them by subverting that society, turning it into something fun and entertaining?

During my high school years, I logged more nights at the Vogue than I could possibly recall. It closed down in 1998, and though a preservation society kept it from being demolished, all that remains is the old sign. The interior was gutted. Now it’s a mall. No more scifi there. No more science fiction double features. But rather than lament the passing of those wild, self-indulgent nights, I prefer to remember not just how fun they were, but also how much they meant to me and how profound an impact they had on me. I shed a lot of bigoted assholishness thanks to Rocky Horror. And I became a lot more fun. Certainly more daring.

When I celebrate and crusade for diversity in science fiction, that passion runs directly back to The Rocky Horror Picture Show. I was markedly different when I walked out of the Vogue Theater. My life had been placed on a much different, much more open-minded (and much more gloriously strange and perverse) trajectory than the one on which it had been before I walked into that dark, slightly sinister movie house. I mean, really! How much more interesting is life when it’s full of people like Dr. Frank N. Furter, Riff Raff, Columbia, and Magenta? Coming from a decidedly Brad and Janet world, I was more than willing to sacrifice myself to that exquisite corruption — to give myself over to absolute pleasure. 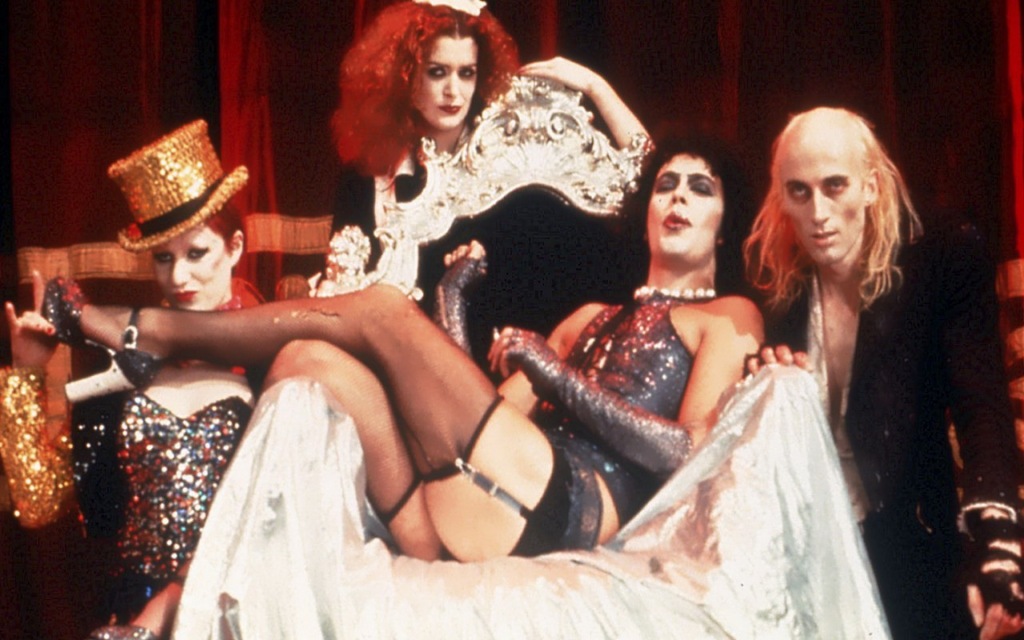