Floating Along in the World of Rivers and Lakes

As the martial arts world of rivers and lakes flow, some of it seeps down to me here in the gutter. The last few months I’ve been soaking in wuxia, a Chinese genre of historical and fantastic epics about the adventures of xia, errant chivalrous heroes.

Pronounced very roughly, “shya,” xia come from every social class.  They are loyal to their friends, pursue righteousness (yi), punish the iniquitous, hone their skills and live beyond the shores of respectable society in the “world of rivers and lakes,” (giang hu/jianghu) along with hermits, bandits, beggar societies and Triads. Watching Chang Cheh’s Water Margin and King Hu’s Come Drink with Me as well as borrowed DVD’s of the 1986 Hong Kong tv show, Legend of Condor Heroes based on Jin Yong/Louis Cha’s book and reading the library’s copy of Jin Yong’s The Deer and the Cauldron, I think that xia might be the shit.

But while I love wuxia books and films, comics are my little effluvial pool.  I’ve been splashing around  with my new favorite manhua artist, Ma Wing-Shing, his adaptation of Zhang Yimou’s film, Hero (Comics One, 2003) and his adaptation of another Jin Yong book, Heaven Sword and Dragon Sabre (Comics One, 2002), made into Kung Fu Cult Master, starring Jet Li.  Ma Wing-Shing started creating manhua in 1976, at the age of 17.  By 1982, his Chinese Hero (aka, The Blood Sword, totally different from Hero) had changed how Hong Kong artists drew manhua—even Tony Wong Yuk-Long, sifu of the mighty Jademan Comics (and totally different from Anthony Wong Chau-San, who sings but doesn’t draw as far as I know) (Wendy Siuyi Wong, Hong Kong Comics:  A History of Manhua.  NY: Princeton Architectural Press, 2002: 101, 115, 123). 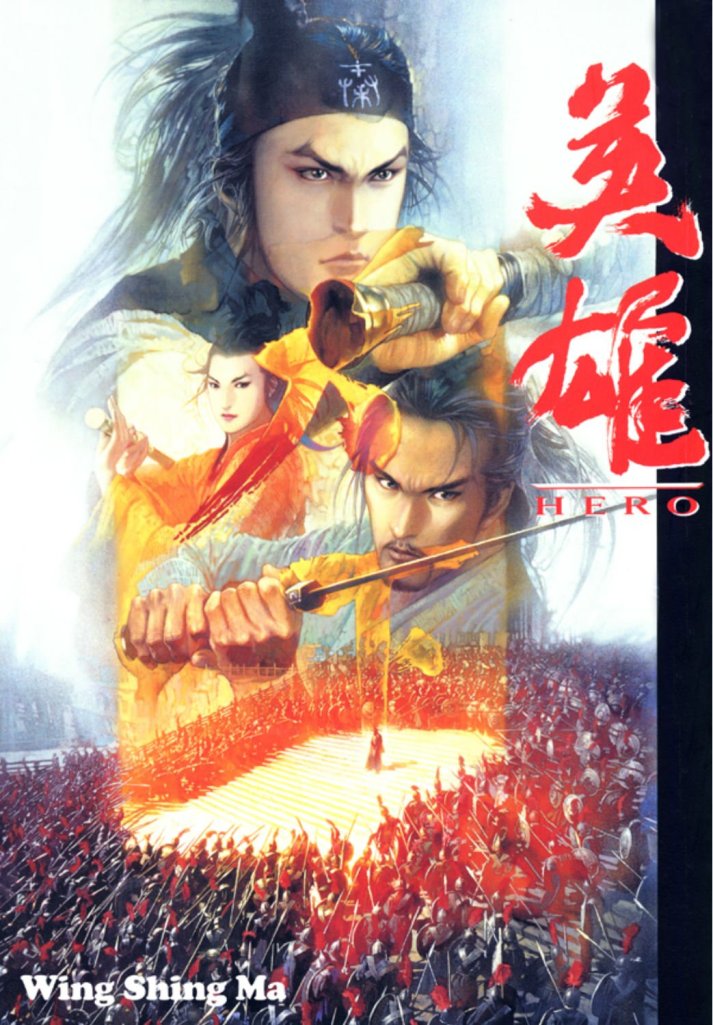 Ma is famous for his realistic painting, rendering panels that DC or Marvel would use as cover or poster art. I’m partial to Ma’s distinctive inked chi or internal power lines that swirl or explode out of characters.  His ocean, mountains and icebergs look almost etched. The lines are best of all when someone’s internal power swirls through water or fractures stone.  I most admire his mixed media—watercolor, colored pencil or ink with brush, technical pen and a very fine nib. His painting on wood is gorgeous. On a single page, Ma uses realistic painting and expressionist line drawing without interrupting the flow.  Hero has the feel of picture book illustration mixed with comic panels.

Some of the picture book feeling comes from Ma’s use of lianhuantu conventions.  A lianhuantu is “a palm-size picture book of sequential drawings….consist[ing] of a series of pictures with brief captions above them” (Wong, 12).  Usually, the text describes what’s happening and what characters think or feel about it. Sometimes the text relates what characters say without attribution—the reader just works it out without a word balloon.  Ma also often writes a character’s name beside them on their first appearance and takes the convention further adding a portrait when, say, Heaven Sword and Dragon Sabre’s  King of Golden Lion is introduced.

The conventions give fantasy like Heaven Sword and Dragon Sabre or legends like Hero, simultaneously a fairy tale and historical feel.

Based on a traditional story of an assassin and the historical Qin emperor, Hero concerns Nameless, a county prefect who has defeated 3 assassins. Ma changes Zhang Yimou’s ending slightly and adds “vital points,” but the heroes’ abilities and weapons still blur the line between fantastic and plausible.  Like Zhang, Ma experiments with form, although I admit I preferred Ma’s use of color to mark each telling of Nameless’ duels with Sky, Broken Sword and Flying Snow.  I’m still pondering Ma’s use of line art versus painting in telling the stories.

Heaven Sword and Dragon Sabre is volumes longer and way more fantastic.  Author Jin Yong set the story at the end of the Yuan Dynasty and included historical figures and events—the Manichean Ming Cult, for example, which did revolt against Mongolian rule.  But all this grounding makes Heaven Sword and Dragon Sabre’s crazy wuxia fantasy even more crazy fun.  It might be the most crazy fun wuxia epic ever, involving all kinds of schools and sects and well-developed characters with extra complicated motives and powerful skills.  And girls like me dig characters with skills.  It’s also impossible to encapsulate.  With a mother in the Ming Cult and a Wu Tang father, Wu Ji tries to bring peace between the notorious Ming Cult and the 6 Major Kung Fu Schools—including both Shaolin and Wu Tang.  Meanwhile, there are the eponymous superweapons, moves like Radiant 9, Jinx and Buddha Palms, ill-fated lovers, the vampiric King of Green Bat, governmental intrigues and troublesome ladies on
romantic boats.

Who doesn’t like stories of loyalty and righteousness, especially well-drawn ones about ending prejudice-bred feuds and sacrifice for something other than a country or lord?  So I’ll float along, maybe a little disreputable here in the gutter, but still struggling for yi.

While Carol Borden does veer between Cantonese and Mandarin in her article, she is a master of the Jinx Palm.  So watch it.