You can easily glance off the top of any book by Stephen King–get a few frights and move on. But there’s a hidden world beneath almost all of his books, and not only is it frightening, it’s incredibly intricate (see this flow chart). I revisited King’s Dark Tower series and some of the related books, and while I’m not entirely sure it was worth it, here are a few things that struck me.

First, the Dark Tower series itself, a tale of a gunslinger named Roland and his companions who are trekking to the tower of the title. In general, I felt like it was a fun dark fantasy, kind of like Lord of the Rings crossed with Philip K. Dick crossed with a classic Clint Eastwood western. As an example: at one point our heroes are fighting an insane giant bear named Shardik (one of many echoes of cultural items in our world), who turns out to be an insane giant robotic bear who can be defeated by shooting off the radar dish on the top of his head. The Tower used to be defended by magic (the bear was a Guardian), but when that ran out, the magic was replaced by technology (the robot bear was a Guardian). Too bad that the technology is all wearing down too, just like the world itself. This gives the series an unusual flavour, where not only is there a nifty mix of the supernatural and the technological, Roland and co. can’t even count on the reliability of time or distance.

Everything is in jeopardy.

I had never read the whole series in one go (the last time I wrote about it for The Gutter, I had just burned through the last three books, but probably hadn’t read the first four books in years and years), so I was curious to see how it all would flow together. Unfortunately, it was pretty rough, usually in an interesting way since the series is not structured conventionally, but definitely rough in patches. 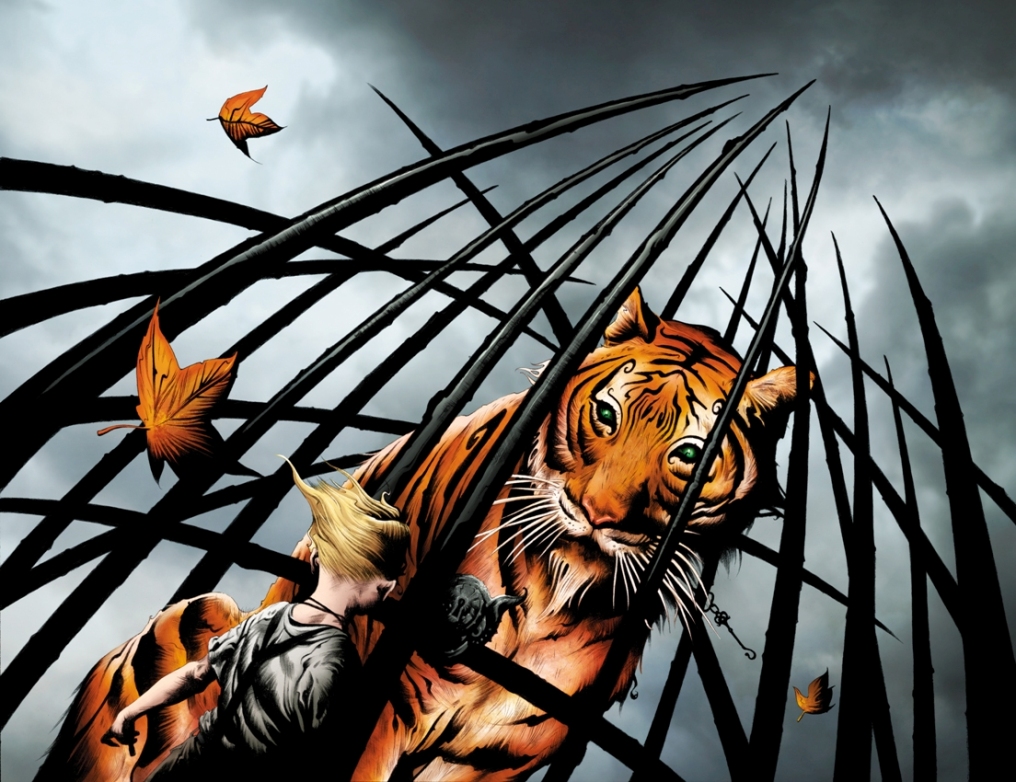 For example, the first two books felt like a weirdly massive prologue to the story, where King is still adding characters to the quest. And he doesn’t really get down to business until book three, then book four is almost entirely a prequel. Book five, Wolves of the Calla, was a fun read in its recycling of the classic Seven Samurai plot, but it doesn’t hold up in the larger view. Roland and his companions end up striking a large blow directly against the conspiracy that’s breaking down the Tower, but they don’t know it at the time. Huh? Makes sense from a narrative point of view I guess, but not in terms of internal character logic as to why our heroes would expend so much energy on this side quest.

I had a really negative reaction to book four, Wizard and Glass; I found it a terrible re-read experience. The book is deliberately constructed around a series of events that result in the fridging of Roland’s girlfriend. It really strictly conforms to the stereotype. But it gets worse: the book is actually a double fridging, in a not-so-delightful surprise twist. I don’t think I can re-read the book again, since now it would be a double whammy of a trudge and a grind to get through. 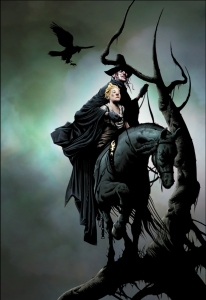 I’m still happy with the ultimate ending, i.e. what Roland finds at the top of the Dark Tower, after a long, long journey. This time around, though, I had a better sense of the other readers’ complaints about the series, i.e. how King whiffs it on the fates of all the other protagonists, as well as all the villains. Ok, that’s a long list, basically everybody except Roland. But mainly the sting of
disappointment is in the shuffling aside of the three who are drawn into Roland’s world at great narrative expense in book two (The Drawing of the Three!). And who is Roland’s main backup when he gets to the showdown at the fields in front of the Dark Tower? A character never before mentioned in the Dark Tower series itself, who was actually introduced in a totally separate book, Insomnia.

Last time around, the notorious authorial self-insertion (Stephen King is a character, and the fate of the universe depends on him writing again after his real-life accident) irked me considerably, but I didn’t mind it so much this time. At least until I started reading or re-reading some of the side-novels that fed into the Dark Tower series.  I was fine with Salem’s Lot, The Stand, and It, since those were existing books that generally functioned on their own, and whose inclusion here generally made sense. But Insomnia and Hearts in Atlantis were just kind of dull (providing backstory of some minor characters), and the duo of The Talisman and Black House were disappointing as well.

An aside about The Talisman: I loved it when I read it back in the 80s, but it didn’t stand the test of time for me. It mirrored my experience of re-reading Wizard and Glass actually, since I could recall the broken/annoying ending all too well. To be precise: The Talisman has a straightforward quest structure, but it’s set up in a way that is susceptible to the “Gandalf should have taken the ring to Mount Doom on eagle-back” plot flaw, and now Gandalf is an old black man with magical powers and wisdom who is mainly there for the edification of a young white man. Worse, he’s waiting at Mount Doom when Frodo gets there! Er… Speedy is there when Jack gets to the end, I mean. Weak stuff. Black House retrofits the two books into the Dark Tower universe, with lots of travel between worlds, and the presence of the same big bad.

Since the conclusion of the series with book seven in 2004, a few more items have come out for Dark Tower fans. Book 8, The Wind Through the Keyhole, published last year, was really, really solid and entertaining! A self-contained set of stories in the Dark Tower universe, taking place between books four and five; I wasn’t expecting much but I rather enjoyed it. A comic book adaptation of the series, dealing with a lot of prequel material, started in 2007 and just ended. I have to say, it’s never really been to my taste. Robin Furth was mainly responsible for the plot and story continuity of the comics, and her updated Dark Tower Concordance has the official word on just about anything that’s happened in the Stephen King universe.

I’ve just finished Doctor Sleep, King’s brand new and heavily hyped sequel to The Shining. I have to say, it’s pretty damn good! It’s an interesting remake of Firestarter, and resembles Black House in a lot of ways but is a far superior book. Highly recommended.