Let’s not realize your dreams…

For our anniversary, my wife and I got a really nice message from my family wishing us good things, including that we would “realize our dreams”. When I’d finished responding, I looked over at her and noticed she had a strange expression on her face. You might think that after I woke up to find her staring at me the morning after we watched 28 Days Later and it turned out she was wondering what object in the bedroom she could use to beat me to death with if she had to, I’d have learned not to ask her what she was thinking. Since I went ahead and married her though, it shouldn’t be a surprise that I decided to take my chances.

“I’m not sure realizing my dreams is a good idea,” she said slowly. And if you take it literally, she’s right. All kinds of terrible things happen in her head while she’s sleeping. I thought about the odds on that for a minute. “Yeah, let’s not realize your dreams. Your dreams are 85% likely to eat us.”

Of course, dreams aren’t only confined to sleep. In the interview Carol Borden did with Dave McKean for the Toronto International Film Festival, he talks about how the blending of naturalistic and fantastic elements describes the parallel nature of our real and fantasy lives. We’re constantly slipping in and out of the present moment and our physical surroundings, taking shortcuts through fields of memories or losing ourselves in mazes of fear and longing. Those kind of dreams are usually more lucid and less out of control than when we’re unconscious, but they’re still generated by the same brain.

It’s part of why I’ve always loved magic realism and speculative fiction. They’re a combination of real and unreal elements that I find often captures how it feels to experience the world better than the most detailed description. Even though the pieces that make up my daily life are mostly practical, concrete, and repetitive, my brain seems quite able to blend them together with daydreams, memories and plans for the future, as well as books, movies or stories I read on the internet so that what feels like the reality of my day is actually an amalgam of things that both did and did not happen to me.

Many of my favorite movies have had fantastical elements to them. Fantasy works as a metaphor where the thing that we see is not the thing that we ourselves experience, but we recognize it because it feels the same. Like how I related to Tim Burton’s Edward Scissorhands as a teenager, for instance. The source of my loneliness and sense of isolation was not due to having fingers like knives, or having been created by Vincent Price and living by myself in a creepy old mansion for years until someone came and found me, but I empathized oh so strongly with his experience. I couldn’t cry for myself, but I was able to connect to my own experience through his and cry for both of us.

Watching a movie of someone going through what I was actually experiencing would probably have been painful, but not cathartic. Seeing myself reflected in that kind of clear mirror mostly just makes me wince, but a parallel experience shown through the funhouse mirror of fantasy leaves me free to feel whatever I’m feeling without worrying about practicalities or consequences. A scene where someone behaved incredibly awkwardly while having dinner with someone else’s family would have been nearly unbearable for me to watch, but seeing Edward trying to manage normal table manners by using his fingers like cutlery just made my heart go out to him. I have felt like he looked, as if my hands were monstrous contraptions I could hardly control, like I was completely out of place and unable to fathom the behavior expected of me.

It works because it’s a visual metaphor, where what you’re seeing actually tells you a truth about something else. For example Jean-Pierre Jeunet’s Amélie, who literally melts into a puddle on the floor when she sees her crush come into the cafe where she works. In our lives we’d have the feeling and then come up with the description that it feels like we’re dissolving, but here it operates in reverse where we actually get to watch it happen and immediately understand the feeling that caused it. Fantasy is also a medium that allows people to experience compassion for one another without feeling personally criticized by a character or situation that bears too strong a resemblance to their own. It pulls everyone in and we feel the same things together by proxy, where we might otherwise feel isolated and unable to relate to each others’ real life experiences, even when they’re emotionally very similar. 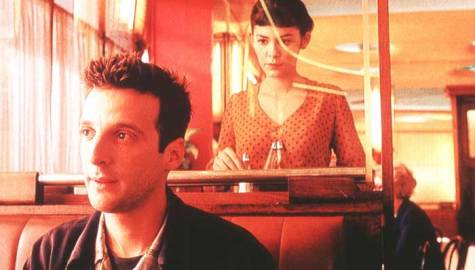 Which brings me back to the parallel nature of our real and fantasy lives. My dreams are usually not anything I would mistake for reality – they’re about things like learning carpentry from tiny builder monkeys who live on a planet that spins in an irregular orbit which causes all of the trees to grow in spirals – but my fantasy life mostly doesn’t feel distinct from my “real” life. When characters in movies see the thing they’re imagining play out before we’re returned to what really happened, or when the story is interspersed with fantasy interludes, I think that actually resembles my experience more closely than stark realism or traditional narrative.

I’m not saying that I regularly go down the rabbit hole, but if I do happen to imagine that the guy who would not stop talking at the end of my last meeting was suddenly transformed into a turkey and everything that came out of his mouth after that was “gobble, gobble, gobble!” that’s just as much a part of my day as all the boring things he actually said. In fact, I’ve forgotten those and all I really remember is “gobble!”

alex MacFadyen is very happy dreaming about his tiny carpenter monkeys, but suspects they would be a whole lot of trouble if his dreams came true.