Against my better judgement, the lights in my apartment are connected to a wireless network controlled via an app. There are physical buttons, but they are located near the plugs, at ground level and often behind obstructions. When I leave, turning off the light requires digging my phone out of my pocket, typing in the unlock code, opening the app, waiting for it to detect the network, then tapping a button to turn off the light. I do all of this while standing an inch or so away from the old wall switch, the use of which would achieve the same result in a fraction of the time. As a result of this modernity, every time I leave the apartment, I feel the uncontrollable urge to make sure I’m listening to the title theme from French director Jacques Tati’s 1958 masterpiece Mon Oncle. I am, at that moment, Monsieur Hulot.

Tati’s third film, and the second to feature the iconic character of M. Hulot, Mon Oncle is a film built largely on the shoulders of the persistent delusion that technology, automation, and progress makes our lives better, more efficient, and more logical and that anything marketed in the name of technological progress is desirable. Mon Oncle — as well as Tati’s follow-ups, Play Time (1967) and Trafic (1971) — acknowledges the inherent absurdity of such situations, satirizes it, but rarely seems mean-spirited, angry, or bitter. Rather, it seems to look at the future, accept that there’s probably no diverting it at this point, and then goes about finding the human niche, the pockets of life and humor nestled in between the straight lines, reflective glass, and modernist architecture. 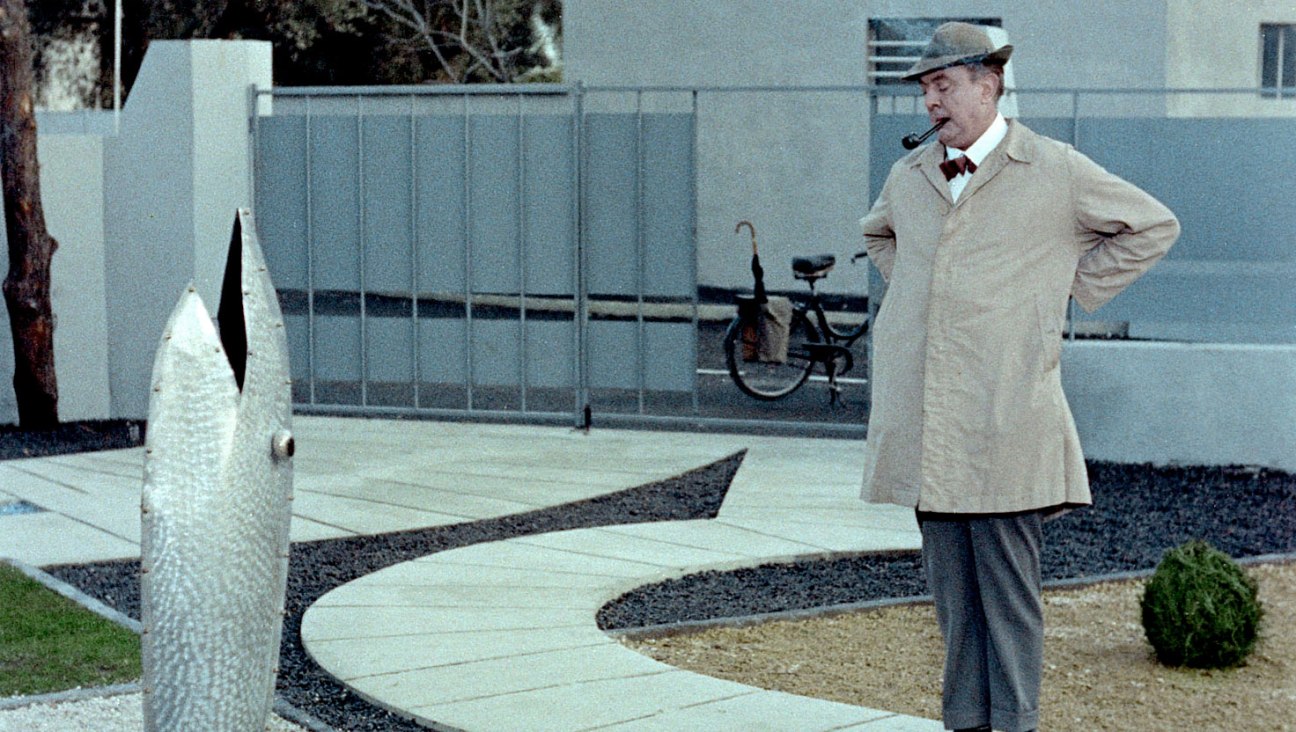 Hulot (Tati, who also wrote and directed) is an anti-everyman, bumbling confused and oblivious through a futuristic, high-tech Paris clad in his signature Macintosh and highwaters and smoking his signature pipe — completely mundane yet sharply noticeable amid the legions of suited men and women around him. Standing in contrast to Hulot is his sister and her husband, who live in a state-of-the-art home of the future in which everything is automated to the point of being unusable. Chairs are so artfully designed that it is impossible to sit in them. Doors require a panel of complicated remote controls to open and close. The simple act of pouring a glass of water or making scrambled eggs requires a staggering array of newfangled gadgets designed to make lives easier and more comfortable.

The couple is concerned that Hulot has no job and seemingly no means of supporting himself (though he seems to lead a perfectly enjoyable life). He lives in a shabby old apartment building that looks like something from the previous century and seems to spend the entirety of his day wandering aimlessly, stopping for drinks with friends, and generally carrying on as if he isn’t the least bit concerned with “getting ahead.” Although they are poked fun at for their worship of anything and everything modern and for their determination to love their futuristic gadgets no matter how poorly said gadgets perform, Jacques Tati (like Hulot himself) never seems particularly venomous toward the couple. Hoping it will force Hulot to “grow up,” his brother-in-law secures him a job in a plastics factory. His sister wants to set him up with a nice girlfriend. They invite him to parties and let him go on adventures with their son, who is as bored by all this technology as a modern child is by a first generation iPod.

The Paris that Tati constructs for Hulot to wander through is one in which the new butts up against the old, in which glass high-rises are being erected even as old men still tool about on bicycles with loaves of bread in the basket; where angular high-tech homes co-exist with drooping old brownstone tenements. What makes Tati’s film so appealing — besides the comedy and the mid-century design eye candy — is the lack of cynicism in contains. Tati sees this futuristic fantasy world as a source of comedy, but he doesn’t seem to hate it or be imploring us to turn back the clock to a rose-tinted “better time.” Tati himself relies, after all, on an incredible amount of technology to make the film. There is a warning about the slavish acceptance of new tech simply for the sake of new tech that is as timely now as it was then, but not everything new is seen as evil. Most of the people who, unlike Hulot, chose to live to the modern rhythm are basically good and likable people. They simply get carried away by the breathless promises of technological progress made without consideration for the humanity it effects.

Oddly, Mon Oncle serves not just as a satire of the science fiction society they were building in the 1950s and which has since come to pass in a way that manages to be both wondrous and disappointing at the same time. Mon Oncle also serves as a coping mechanism. When I find myself on a cell phone call, unable to hear a damn thing and thinking about how my old corded telephone was so much better for talking and listening, rather than going all Henry Rollins in Johnny Mnemonic on technology (his sentiments are similar to Tati’s…if a little angrier), I can calm myself down by thinking of the scene in which M. Hulot’s relatives are trapped inside their own garage when a dog runs past the motion detector that controls the opening and closing of the door. It’s not so much a pressure release as it is a reality check, a reminder that an acknowledgement of the absurd in life is a good way to learn not just how to live with it without going insane, but is also a good way to learn how to avoid it M. Hulot style and carry on without it dragging you down.

The fact that we live in a world that has itself rapidly “futurized” itself, that we take for granted things so miraculous that science fiction barely dared promise them, has kept Mon Oncle relevant. The speed at which modern technology moves ensures that even someone relatively tech-savvy, as I think of myself, ends up feeling like M. Hulot no matter how hard we try to keep pace. One need only sit in an office meeting where the first ten minutes are dedicated to trying to find the right dongle to connect a laptop to a projector, then another few minutes are spent trying to get the laptop screen to display on the projector, then still more minutes are spent with people shouting “can you her me?” into a speaker phone to realize that the world on Mon Oncle is thriving. I work during the day in an office at a major academic institution. I have watched men and women with advanced engineering degrees who have designed and implemented global computer networks struggle for fifteen minutes to get a printer to work. Last week the high-tech card swipe that controls access to the building went offline, effectively trapping me inside the building because I need to swipe to exit after normal hours, and the security guard was away from the front desk. One could get dejected by that. One could certainly get frustrated and feel alienated. Or one could elect, like Tati and Hulot, to simply have a puff of the pipe (not in the building though; this isn’t Mad Men) and chuckle at the absurd state of affairs we’ve foisted upon ourselves.