Beneath the Mysterian Dome

In the latter half of the 1950s, it seemed like every alien race with a saucer was high-tailing it to Earth with dreams of conquest, colonization, and a little lovin’ with the locals. The invaders of the 1950s came in many shapes and sizes. Some were blobs. Others […] 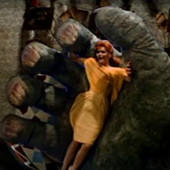 The Words Got Stuck In My Throat

“If I had a hidden microphone inside of my heart/I would turn the power on/It would amplify my love for you and swear to always love you/and you’d never be gone.” I love when old movies–that are not musicals per se–spotlight the performance of a song, because it’s […]

Just in time for Eiji Tsuburaya’s birthday, here’s a brief video documentary on his career in special effects for films ranging from Godzilla and War of the Gargantuas to Throne of Blood and Chushingura.

Kaiju invade the airwaves as The Cinementals discuss the work of Godzilla director Ishiro Honda, King Ghidorah is the monster of the month at Monster Island Resort and this week’s Drive-In Mob movie tweetalong will coincide with Turner Classic Movie’s screening of 4 Ishiro Honda movies on Friday, […]

Gutter Comics Editor Carol wrote a little piece on Akira Kurosawa and action films over at the ActionFest Blog in honor of Kurosawa’s 102nd birthday.

At the Criterion Collection blog, Curtis Tsui shares, “10 Things I learned About Godzilla.” My favorite involves sugar wafers. (via Kaijucast)

Criterion’s excellent three reasons for its Godzilla (1954) DVD and Blu-Ray.