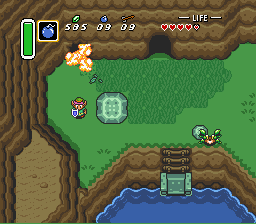 Every April at the Gutter we mix things up with the editors writing something outside their usual domain. This week Screen Editor alex writes about video games. The last time I wrote about video games, I detailed my failures as a creator in the original Creatures artificial life […]

Kaitlin Tremblay examines why she prefers first person perspective to third person perspective when gaming: “If female characters have typically existed only to be looked at, then removing them visually and collapsing them in gamer/character removes this gendered aspect of the gaze. There is no gendered complication between […]

Everyone loves getting in on a good secret. The same feeling of invulnerability and anonymity that makes email flaming such a big part of the internet encourages the trading in verboten information. It’s been going on for a long time, as least as long as the BBS scene […]

The show’s opening sequence starts with a woman in a black bodysuit facing off against a hulking monster. When she finishes him off with a jump-kick, the music swells and the words “Game Over” come up. “Did you ever wonder what happens after the game ends?” a voice […]

Powerful women are sexy, and this cuts both ways. MobyGames, a game documentation and review project, has a categorization for female protagonists that shows that there have been about as many games released in the first three years of this decade as there was in the entire previous […]