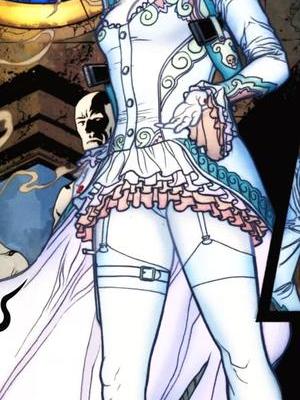 In this time of uncertainty and dread, with Batman dying and Dick Grayson taking up the cowl, with dead Robins returning all crazy or replacing Batgirl, with Bruce Wayne taking a global crimefighting initiative Batman Inc. public, there’s one thing I am sure Gotham that has going for it: Batwoman.

In my first Gutter article I wrote about loving Ed Brubaker’s Catwoman. I might love Greg Rucka’s Batwoman as much, but slantwise. I’m not sure I like Kate Kane, but I do kinda like a character who I don’t entirely like. It’s part of Manhunter Kate Spencer’s appeal and it’s part of Kate Kane’s. She has a lot in common with Bruce Wayne, who can also be difficult to love. Batman’s superpower might, in fact, be stubbornness and Kate Kane is stubborn. She’s also difficult, rigid, wounded, loyal and probably oh-so-secretly romantic, all traits Bruce Wayne shares. There’s a nice moment between them in Batwoman: Elegy (DC, 2010). They’re on the rooftops of Gotham. (Where else?). Batwoman corrects Batman on a case detail. Batman responds, “Do something about the hair.”

Batwoman made her first appearance in DC’s, 52, but I didn’t connect with her or her high-heeled crime-fighting boots. DC puts the denial in comics for me these days. So, for me, Batwoman begins with Batwoman: Elegy, which collects Detective Comics #854-60.* Greg Rucka writes fully-formed, complex and engaging characters. J.H. Williams III’s art is gorgeous, with exquisite splash pages and inventive panels (bats!). Dave Stewart’s colors are somehow both delicate and deep. Their art demarcates Kate’s life as expelled West Point cadet/drifting playgirl and as Batwoman. Incidentally, I like her red boots and their bat-treads. (Yes, boots are synecdotal to me). In short, Elegy is a perfect union of story and art. The single issues include a second feature by Rucka and artist Cully Hamner starring Renee Montoya, the new Question (also Kate Kane’s ex).

Actually, that history’s not entirely accurate. Batwoman first appeared in 1956. According Les Daniels’ Batman: The Complete History, (San Francisco: Chronicle, 2004), Kathy Kane might not have been a direct response to Fredric Wertham’s criticisms of the Dynamic Duo, but she certainly straightened up the place.

[Batwoman] was Kathy Kane, a former circus acrobat who used an inheritance to fulfill her dream of imitating Batman and began showing up in answer to the Bat-Signal….Even while fighting crime, however, she displayed signs of conventional womanliness. She carried a purse rather than wearing a utility belt, and armed herself with such ‘flashing feminine tricks’ as a lipstick filled with tear gas and a compact containing sneezing powder (91-2).

Heteronormativity abounded. There were marriages (clever ruses), declarations of love (also a bat-ruse) and chaste kissing. But Batwoman was gone from Gotham and Batman’s life by the mid-Sixties. In 1979, Batwoman was “rather gratuitously stabbed to death” (99).

There’s an ironic satisfaction in Batwoman’s return as Kate Kane, a West Point cadet expelled for refusing to lie about being a lesbian. That frustrated desire to serve drives Kate to become Batwoman. So, most of all, I appreciate that she is a fully-realized character and that the book is well-grounded. Rucka and Williams went to Lt. Dan Choi for background on West Point as well as his experience of being gay in the military. Choi also appears in Elegy. And, despite Kate’s active love life, the book’s not salacious. I do wonder how her nipples show through her body armor, though. There must be some darting. Still, it’s no visible pantylines situation.

It’s hard for me to wrap my brain around the fact that Batwoman ran in Detective Comics. With its mature content and themes, I expect the comic to carry DC’s “mature” Vertigo imprint. And I don’t mean “mature” as a euphemism for, “sex.” I mean, mature like 1970s police dramas. Elegy is intense, character-driven, adult. It looks—and often feels—psychedelic as Batwoman is poisoned by Alice, the High Madame of the Religion of Crime. Alice takes after in Alice in Wonderland, but a grown-up freaky, kinky one. Her outfits alone are Vertigo. Williams and Stewart’s art is particularly inspired when Batwoman’s through the looking glass. Her second Detective Comics arc, “The Cutter” (#861-3), is similarly adult, dealing with obsession and horrific violence while Batwoman trails a criminal who escaped Batman years ago. Batwoman’s run ends with Detective Comics #863. There’s a final, cliffhanging panel with Kate’s cousin Bette Kane saying she “wants in” on the crimefighting. And that’s it.

Batwoman was successful enough that DC planned a new monthly title under Rucka and Williams. But now Rucka has left DC. Williams will do both the writing and art for Batwoman 0, which comes out this month. But even though Williams worked with Ruckka and on Alan Moore’s very lady-positive Promethea, I can’t help worrying about Batwoman and the Question. DC has amazing characters, but they don’t always seem to know it. There are only a limited number of titles each month and DC is cutting their second features. And while Kate Kane and Renee Montoya are heroes who happen to be lesbians, the heroes who happen to disappear, be displaced by Silver Age predecessors or die are often characters who happen to be like Kate Kane and Renee Montoya. And so I am uneasy.

*I was just reading about Batwoman and Batgirl at Kelly Thompson’s blog and DC Women Kicking Ass. I can’t seem to find the posts mentioning that if DC was going to retcon so are they, but that’s pretty much how I feel right now.

Carol Borden is high-speed, low drag all the way. And the Batman Rule is always in effect.