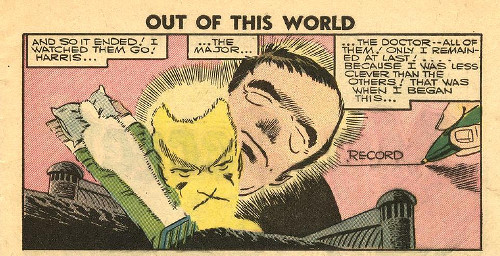 “For my own part, regret nothing. Have lived life, free from compromise … and step into the shadow now without complaint.” –Rohrshach’s journal (Alan Moore, Watchmen)

I read Watchmen as many people do, without knowing the comics history Moore invoked. In a story that begins as a superhero murder mystery and becomes so much more, Rohrshach investigates the death of a superhero team mate. He wears a mask that shows his face as an ever-changing inkblot, daring those around him to see him and to see themselves. Rohrshach is brutal and sociopathic, but his refusal to compromise, his total commitment was compelling. It resonated with something in me that condemns hypocrisy and lack of commitment, that prizes consistency for its own sake.

Now Blake Bell is helping everyone know about Ditko with his fantastically illustrated, and alternately admiring and frustrated biography, Strange and Stranger: The World of Steve Ditko (Fantagraphics, 2008) and the new series he’s edited, Unexplored Worlds: The Steve Ditko Archives (Fantagraphics). Ditko’s probably most famous for co-creating Spider-Man, but he also created Blue Beetle, Captain Atom and The Question. Before that, Ditko worked on one-shot strange tales and space opera stories for Charleton Comics’ anthology titles. Unexplored Worlds, Vol. 2 (2010) collects his Charleton work from April, 1956 to May, 1957—engaging Comics Code-compliant weird tales and space opera stories.

These themes are much more apparent as Ditko’s work became influenced by Ayn Rand’s writings. Ditko created an Objectivist detective hero, Mr. A, whose name refers to both the word, “mystery” and Ayn Rand’s famous dictum, “A is A.” According to Bell’s biography, Ditko began explicitly using comics to promote his Objectivist ideals about justice and the unflawed hero* in 1967, but Ditko’s work suffered.

While Ditko conveys great passion for his ideas (based on many of the same themes from The Fountainhead), his artwork continuously fights for space with bloated word balloons. Ditko was allowing his characters to become political ciphers, robbing them of a credible voice through any kind of naturalistic dialogue. Each of his heroes was becoming interchangeable, as were his villains; the polemical ideas they espoused had become Ditko’s only interest.

And Ditko became unswervingly committed in his belief that a creator should not support parasitic “nonproducers,” leading to an image from Bell’s biograhy that I can’t shake—Ditko in his New York studio, cutting up his own work rather than compromising his principles by donating or selling it.

During a visit to Ditko’s studio in the 1990s, publisher Greg Theakston noted something strange about Ditko’s cutting board. ‘I looked a little bit closer, and I detected a Comics Code stamp on it. It was an original page of Ditko art from a 1956 issue of Journey into Mystery. Theakston was dumbfounded and pleaded with Ditko: ‘Steve, I will go down to the nearest art supply store and buy you a cutting board[.]’….Ditko—despising altruism in any form—said, ‘Nope.’ Theakston pleaded the financial and historical consequences. Ditko directed Theakston to lift up a curtain that revealed almost 18 inches of original artwork from Marvel, but wouldn’t let Theakston see the work. ‘I was sitting next to a hundred thousand, two hundred thousand dollars, maybe, of Ditko artwork,’ laments Theakston, ‘and he was cutting it up without letting people look at it’ (167-8).

Ditko’s commitment to his principles is powerful. It’s the same commitment I find both appealing and appalling in Rohrshach. I can find a desire for it in myself. But consistency in itself is not a virtue. It can be harnessed to something awful. It can become something terrible in a messy world.

And while I sympathize with Rohrshach, working alone to reveal the unrevealed truth. I end up seeing Ditko’s work arc from earliest “dependent work” as he calls it, the charming, imaginative comics collected in Unexplored Worlds, the rockets, superintelligent monkeys, green insect aliens seeking earthling wives, paintings that lead to another world, angelic visitors and poetically just twist endings, to his later work created entirely on his own terms and for his own purpose, but less effective as his characters become “ciphers” and his design, text-heavy.

Sometimes the best art is “dependent.” Constraints and restraints can lead to great work, from the patronized artists of the Renaissance to Masaru Satoh’s Yojimbo soundtrack, composed in two weeks, or even Ditko’s “The Supermen,” a weird tale of men exposed to mysterious radiation growing superintelligent–and featuring a finely-rendered monkey.

But that image of Ditko haunts me more as I read comics from 1956 in Unexplored Worlds. Steve Ditko, uncompromising, in a horrifying twist ending, cutting apart work I am enjoying so much—possibly even a panel I am reading—for the sake of ethical consistency and creating pure, uncompromised art.

*in response to Marvel (and later DC) humanizing heroes by giving them flaws—and killing them.