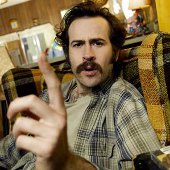 Karma Borrowed my Fist: Ayn Rand, Earl Hickey and The Law of Attraction

Earl: I got a weird feeling in my stomach. Randy: Maybe you got stomach cancer. Can karma cause stomach cancer? – My Name is Earl, “O Karma, Where Art Thou?” Season 1, Episode 12 While I was packing returns at the bookstore where I work, a random book […]

“For my own part, regret nothing. Have lived life, free from compromise … and step into the shadow now without complaint.” –Rohrshach’s journal (Alan Moore, Watchmen) I read Watchmen as many people do, without knowing the comics history Moore invoked. In a story that begins as a superhero […]

How I Learned to Stop Worrying and Love Science Fiction Again

It’s been years since I’ve read any straight-up science-fiction. You know, the classic stuff by authors like Arthur C. Clarke or Robert Heinlein or Isaac Asimov. But I got back into it recently through A.E. Van Vogt, having picked-up a used copy of Empire of the Atom.

ROUND THE DECAY OF THAT COLOSSAL WRECK

In the run-up to, and wake of, the release of Watchmen, it has become common currency to say that adapting Zach Snyder, et al undertook a massive challenge in adapting Alan Moore and Dave Gibbons’ complex, sprawling medium- and genre-defining work for the screen. But I’m going to […]