Don’t Know How She Does It

Several years ago I went to Disney World with friends who had a small child.  The three of us adults were almost enough to keep the little one from exploding in all directions, but afterwards I needed a vacation from my vacation.  So I headed off to Daytona Beach, intending to spend a few days driving up the coast, visiting some of the historical sites.  But the very first day, something happened to change all my plans.

When wandering through a mall (pasty white Canadian girls need to be OUT of the Florida sun at noon, thank you very much), I bought a book by Marjorie M. Liu.  Her first novel, Tiger Eye.  The next day, I chucked all my noble sight-seeing goals and went back to the bookstore for more.  For the rest of my holiday I did little else but read my way through Liu’s backlist.

That, my friends, is what I call a holiday.

Tiger Eye is the story of Dela, an artist and metalworker, who buys a puzzle box in a Beijing market.  The box turns out to be a magical construct containing a two-thousand year old shapeshifter named Hari. While understandably surprised, Dela is not without powers of her own, and she is determined to help Hari free himself from the curse that has held him captive for so many centuries.  Faced with dangerous enemies both secular and magical, Dela and Hari have to depend on one another to survive.  Naturally, they fall in love.

Tiger Eye was a wonderful surprise to me.  The prose was dense, almost poetic, and the plot didn’t do what I thought it would.  It was a tremendous debut, and I was so glad I could read more of Liu’s work right away.  Tiger Eye is the first book in her ‘Dirk & Steele’ series.  Dirk & Steele is a detective agency that specializes in truly unusual (read: magical) cases.  The agency boss is a psychic, and all the agents have mysterious powers, not all of which are benign, or easily controlled.

Thus far, there are eleven novels and a short story set in the Dirk & Steele world.  It’s a world that keeps getting more complex, with old enemies 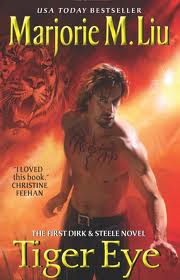 falling and new evils rising, and the powers and motivations of various factions coming in to conflict.  Originally, the Dirk & Steele series was published by Dorchester.  I don’t know if Liu got burned when Dorchester went down in flames – I hope not – but the books are now available from Harper Collins.

So, a fabulous Romance series.  But that’s not all.

In 2007, Liu had a novella, ‘Hunter Kiss’, in an anthology called Wild Thing.  I remembered reading that story and loving it.  Obviously I wasn’t the only one, because the story became the basis for an entire series about Maxine Kiss, a demon hunter and slayer.  Maxine is very much alone.  It’s easier that way:  no need to explain that her tattoos change every day because they’re not tattoos but small demons, who sleep all day on her skin, rising and pulling off when the sun sets.  But then she meets Grant, a former priest who runs a soup kitchen and who, by the way, can keep demons from committing evil.  She wants to kills demons;  he wants to save them.  But it turns out that the war both of them are fighting is only the tip of the iceberg.

While Hunter Kiss is very much a Fantasy series rather than a Romance series, love is crucial to both the plot and character (it’s just that the magical elements are even more so).  Myth runs deep in these books.  Liu’s writing is layered, compressed and almost opaque at times, making these slim books a real pleasure to read.  Thus far there are four novels and two more stories in the ‘Hunter Kiss’ series.  The most recent, Mortal Bone, arrived in January, but I haven’t read it yet.  I’m saving it for my vacation. I leave tomorrow, and can’t wait to read it.

But that’s not all, either.

A long-time fan of the X-Men, Liu got the chance to write an X-Men novel in 2005.  That led to conversations and meeting that started Liu on a journey that led her to her writing comics for Marvel.  She does this concurrently with her Romance and Fantasy series.  Alone and with writing partners, Liu has written comics for Dark Wolverine, Nyx, Black Widow, and X-23.

Romance, Fantasy, Comics… oh, and did I mention that Liu is an attorney?  Okay, she’s not currently practicing, but she did graduate from law school and was called to the bar.  She just didn’t like being a lawyer.  So she decided to pursue her dream of writing instead.  Good news for readers.  Liu wrote and submitted her work, and attended Clarion East to improve her skills.  She remembers the workshop fondly, and not just because she was there when she got the call about Tiger Eye.  This year, in a move that seems almost  narratively satisfying in its symmetry, Liu will teach at Clarion.

Liu currently lives in the Midwest, though she spends a fair amount of time in China.  (She studied East Asian languages and cultures at university, and even worked for a stint at the US Embassy in Beijing).   China appears in a number of her books, and Liu’s wonder, experience, and appreciation breathe through.  I’ve read her blog for ages, but only recently did I check out some of the other tabs across the top of the page.  One of them collects a number of semi-random posts she wrote about/while in China.  It makes for fascinating reading.

Another tab leads to the video game that was created around the first half of Tiger Eye.  There will be another game, finishing the second half, some time soon.  So we’ve got education, travel, Romance, Fantasy, Comics, Video Games… honestly, I imagine how Marjorie M. Liu finds the time to do it all.

I’m just really glad she does.

Chris Szego is often very productive too:  sometimes she can read walk and drink hot chocolate at the same time.