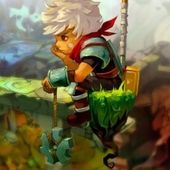 Speaking from recent experience, I don’t recommend getting a cold/cough/(something virulent and archaic, like consumption?) that sticks around for 4-5 weeks. It kinda sucks. With reduced brainpower, I’ve been watching a lot of Rifftrax (“There can be only one?? You should have mentioned that earlier!”). Fun, but not much to say, except that, yup, Highlander deserves some snarky commentary.

However, I did play Bastion, a game from 2011 that’s on most platforms now (I played it on iPad). It’s really fun, and really Stephen-King-esque.

Now, it’s true that a lot of things are Stephen-King-esque (as Grady Hendrix says over at Tor.com: “Stephen King is such a part of the American cultural consciousness that there’s no point in debating his importance anymore”), but Bastion specifically reminds me of King’s The Dark Tower, which is a bit of a different beast than his more horror-focused works. I talked about The Dark Tower on the Gutter a while ago here.

The World that Moved On

Lots of pieces of Bastion reminded me of The Dark Tower:

Fantasy likes to play with the crumbling glories of the past as a massive trope. I don’t think anyone else has taken it as far as King – in his world, distance and time and almost everything else are unreliable. In Bastion, the very ground under your feet has crumbled away. Granted, you as the videogame protagonist are bringing it back somehow (with your magic feet?). Sounds weird, but it definitely works, and I kept getting flashbacks to Dark Tower scenes as I was playing the game.

The Soundtrack of Your (Videogame) Life

I have quite enjoyed listening to the Bastion soundtrack on its own, which led me to try to track down some other videogame soundtracks. Indie games are pretty hot on this topic right now, going back a few years to Braid, and continuing to Bastion, and many others recently. Here’s a handy list of all the games that include a free soundtrack if you’ve purchased them on Steam (Fallout: New Vegas is just about the only one I had noticed before now).

I remember an awesome soundtrack for Grim Fandango, one of the grand old adventure games from the era when that genre was still around. As it turns out, the music was composed by Peter McConnell who has done tons of other videogame-related composition, and it’s available on the web. Think Mexican Day of the Dead meets big-band jazz. Also from the old days of videogaming, the soundtrack for Thief: The Dark Project was quite an interesting mix – maybe medieval beats of a Koop crossed with Ozzy Osbourne variety?

I’ll mention two other videogame soundtracks. An example that’s famous for its closing credits more so than its actual music would of course be Portal‘s Still Alive. I think I might be alone among Portal fans as not caring that much for Portal 2 or the Portal 2 song. I found the second game too aggressively wacky and I disliked the antagonist…  not in a supports-the-narrative kind of way but rather I-wish-this-was-over kind of way.

Bastion, Portal, and all the other soundtracks that people like to argue about online – none of them match up to the all-time greatest (in my humble opinion!). Katamari Damacy of course! Nothing quite has that same catchy, infectious upbeat vibe, and that’s probably because not many other games have the same catchy/infectious/upbeat gameplay. No shooting, no killing, just pure fun. I’ll link to Youtube again because you have to hear it, today, right now.

So if you’re back from Youtube, or if you were already familiar with the Katamari visual flair, you’ll find my next statement a little unbelievable. But here it is: the music for the next games in the Katamari series got too wacky for me, compared to the solid and perfectly balanced initial entry. I should clarify that though. Yes, the visuals in the Youtube video above are like an amped up parody of a dream of a hallucination, but the music itself is lovely and catchy, and very nicely proportioned (if one can say that about a song). Visually, the idea is a bit of an assault, but it’s carried along by well-crafted and maybe even somewhat normal (at times) music. It seemed to me that the subsequent soundtracks amped up the wacky factor, and never stayed as grounded in catchy tunes as the first one. Yup, it’s fun to listen to the theme song redone with sampled barn animal sounds (credited to “John the Dog, Bigmouth the Duck, Yuuhi the Crow, Pe the Goat, Booby the Pig, Sexy the Cat, and Nyuu the Cow” of course!), but maybe only once.