Ray Harryhausen and Me: A Life of High Adventure and Escapism 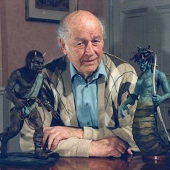 Ray Harryhausen passed away last week. This has been noted by people more qualified than I to discuss the master of stop-motion magic—Rick Baker, Adam Savage, Todd Masters, George Lucas, Peter Jackson, and more. The superhuman talent and perseverance evident in a Harryhausen effects sequence can easily be seen in countless visual effects artists since he first brought his creations to frame-by-frame life on the big screen. That makes sense. So how can I really say anything of worth when I say that I was also profoundly influenced by the artistry of Ray Harryhausen? With modesty, and a story about Clash of the Titans.

When I was too young to really remember, I was taken to this film in the theater. Because I have no real memory of that experience, I am amazed by my true first memory of Clash of the Titans (1981). It all happened because of a wonderful non-profit program called Reading is Fundamental, or Reading is Fun as we called it when I was in elementary school. Many of you know about this: kids are given a colorful little RIF catalog on toilet-paper-thin newsprint paper with a wealth of covers and titles to choose from. Their parents help to make an order, and then, weeks later, the classroom desk is stacked high with the books that kids have ordered. It was like Christmas. And one of the books I had chosen was an oversized hardcover children’s book version of Ray Harryhausen’s Clash of the Titans movie.

This prized possession has lived with me in five states!

I’m not sure what made me pick that one book, but I am willing to bet it was the seed that was planted from seeing the film theatrically before my long term memory was fully developed. That was my first book on classical Greek mythology, and you can bet that Clash of the Titans became a regular title I begged my mother to get from the library. The feats and adventures of Perseus held me in thrall, but, like most kids who love that film, I was mostly captivated by the brilliant monsters and beasts that filled the screen. I am not blind to the irony of writing about how Harryhausen influenced me by citing the film that marked his retirement, as well as the only film in which he worked with assistants. That is how it worked for me—it was the film that taught me the name of Ray Harryhausen.

Of course, it wasn’t long before I discovered another of his films based on classical Greek mythology—Jason and the Argonauts (1963).  Talos, Harpies, Hydra, Medea, Hercules, Jason, all became names that I wanted to know more about. I became fascinated by these epic tales with their fantastic monsters, and that inspired me to learn more about them. Ray Harryhausen had forever set me on the course toward the exploration of storytelling and its place in the history of our existence on this planet.

My first introduction to the Greek pantheon!

An important element of storytelling that has always held me in sway has been the emotion of fear—its mastery over our actions and choices or our ability to conquer its influence. My interest in (or obsession with) the horror genre is one manifestation of this fascination. While I know most people would thumb their nose at the notion that Harryhausen’s special effects epics were horror pictures, I have always been drawn to an element of terror since first experiencing Clash of the Titans. The cannibalized arm in the cauldron of the Stygian Witches, the huge scorpions, the titanic Kraken, and the intensely memorable showdown with the deadly Medusa all filled me with a wondrous dread that I can still access today. It has led me to the conclusion that fear and horror have been cornerstones of human expression and art since its inception, and it lends credence to HP Lovecraft’s assertion that the “oldest and strongest emotion of mankind is fear.”

Harryhausen wasn’t trying to create horror pictures in the traditional sense—he was interested in high adventure and ancient civilizations. I have always found it interesting, then, that in order to tell such stories fear and terror had to be key ingredients in the mixture. One may argue that his pictures weren’t horror pictures, but they sure have historically drawn the attention of horror enthusiasts worldwide. I mention all this because I believe Clash of the Titans has paved my way to this point in my life, where art, literature, storytelling, and horror collide. 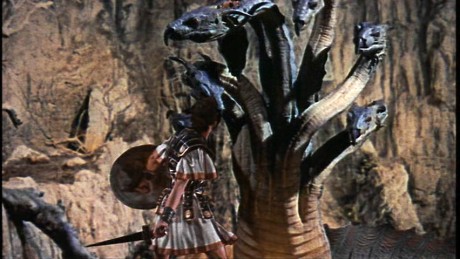 Jason faces off against the Hydra–more accurately a Heracles trial.

When I went to college to get my degree in education, I made the choice to also double major in classical literature. I put myself through college, so this may have been a financially unsound decision, but it was one that compelled me. The obsession with classical stories that had me staying up late nights with Homer, Aeschylus, Euripides, Hesiod, and others gave me an extensive prior knowledge when it came time for me to study abroad in Greece. Many (I think all) of the classmates I was with were more interested in the travel aspect than the class content, and were surprised at my enthusiasm for these ancient stories. Eventually, the inevitable happened—I was asked how I got to love the classics so much, and I told the truth. Clash of the Titans.

Since then, I have started the Horrible Imaginings Film Festival and the Monster Island Resort Podcast. Both of those are venues of expression for me with similar goals—to explore storytelling and the place horror has in storytelling. My personal definition of horror is quite different from most people, which leads me to think that horror can be found in just about anything. All of this consideration can probably be traced back to the transportative effect of Ray Harryhausen films when I was a child.

Clash of the Titans was Harryhausen’s final film before retirement. The changes in effects work in the film industry had left most audience members feeling that his style was a bit archaic. The word “cheesy” has been thrown around by those bereft of the gift of imagination. I wish we didn’t seem culturally fixed to this notion that genre filmmaking needs to constantly head toward levels of hyperrealism or grittiness or innovation. I wish it could be a medium like painting or even comic books, where the tools of the art are part of the expression. Where stop motion, or animation, or men in suits, or puppets could be just another way to tell a story.

Mr. Harryhausen with his creations brought down to size.

For me, the art of Harryhausen is eternal, never quaint or outdated. I don’t see the seams that separate his creatures from life action actors in his Dynamation sequences—I see the singular patience it took to turn 5 months of painstaking frame-by-frame work into five minutes of pure, fantastical magic. It captures both my respect and my imagination and leaves me with deep impressions that films today simply fail to instill.

No, I never made movies. I never became a special effects artist. I never really painted or drew or sculpted professionally. But Ray Harryhausen was an inspiration for me all the same. I became a teacher, a director, a programmer, a film introducer, and a podcast host, for what all that is worth. To Mister Harryhausen, I offer my sincere thanks for the journey, and my appreciation at the knowledge that, so long as I have a way to watch movies, the journey never has to end.

Miguel Rodriguez is the director of the Horrible Imaginings Film Festival and host of the Monster Island Resort Podcast. By day he teaches teachers to use educational technology, by night he dreams of fantastic monsters, and at all times he still thinks Bubo is pretty darn cool. Damn the haters.