I had a bad day, but you’re a jerk

We all know what we thought before we did that thing we really shouldn’t have done. We had a reason. Maybe it wasn’t a good reason, but unless we’re in an existentialist novel it wasn’t completely random and without motivation. Our understanding of why we do things is inextricably linked to what happened around us and how we were provoked. Other people, however, often do appear to be doing things completely randomly and without motivation because we don’t get to see what preceded their actions. It takes a conscious effort to remind ourselves that maybe that person who just drove through a giant mud puddle and left us dripping on the sidewalk was rushing to get somewhere for a reason we could empathize with and didn’t notice we were there until it was too late. When I do something inconsiderate or idiotic it’s because reasons, but when you do it, it’s because you’re a jerk.

It’s called the fundamental attribution error, and it started me thinking about other kinds of perceptual errors people make, like taking things at surface value and mistaking some element of the appearance for the complete reality. For example:

1. It’s a cartoon so it must be for kids

2. Those aliens are so adorable, they must be friendly

3. I can turn my back on that little old lady and not worry she’s going to shoot me 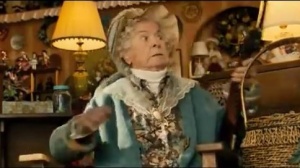 We see markers that we associate with a particular set of attributes based on past experience, and we conflate them in a way that allows us to make what seems like a reasonable assumption about the whole. It’s a kind of shorthand that helps us navigate the world without engaging with the myriad possibilities that exist in any given moment. If we actually considered all the options every time, we’d suffer from decision paralysis at even the simplest of turning points. It’d be like the Total Perspective Vortex in The Hitchhiker’s Guide to the Galaxy, which shows people their actual place in the universe as a microscopic dot bearing the legend “you are here”. The only way to survive the experience is to be encased in a virtual reality where you are the center of the universe so you don’t become catatonic in the face of an accurate perspective on your own significance in the vastness of existence.

Sometimes the shorthand gets too short, and that’s when we start to get into trouble. Our assumptions go from being high probability of success predictions of what can reasonably be expected, to misguided and profoundly inadequate descriptions of reality. If you don’t consider the possibility that the cute little kitty is going to scratch your face off if you try to pet it, you’re falling prey to a perceptual error, in this case that cuteness = sugar and spice and all things nice, not something that is both cute, and also likely to kick your ass or eat you for breakfast.

Interestingly, even though it’s an error everyone makes to one extent or another, it’s also an error people dislike enough that seeing someone proven wrong or punished for making it is one of the most popular and satisfying archetypes. There are almost infinite variations on the story of someone or something exceptional that initially appears to be entirely ordinary, or is actively despised. It’s the ugly duckling, the diamond in the rough, the princess no one recognizes as royalty. It’s the possibility that we all might be secretly, staggeringly brilliant. It’s also the story of succeeding in the face of oppression –  some shining, exceptional quality “hidden” in the body of someone that the dominant stereotypes in a society cast as unlikely. There’s no reason why any particular kind of person might not be exceptional, but there are plenty of reasons why not everyone who is gets noticed or succeeds in doing something exceptional in the world.

Up to a certain social tipping point it’s satisfying to see stereotypes turned on their heads, but beyond that, what used to challenge assumptions starts to reinforce them. For instance, I think Legally Blonde is a lot of fun. It feels good to watch Elle Woods just wake up one day and decide she’s going to go to Harvard Law School, and then watch her learn to work

like hell and realize she actually wants to be a lawyer, all the while remaining relentlessly, hard-core pink. I’ve enjoyed watching sexist guys get left in the dirt when it turns out that a girl can kick their ass up and down the block in heels and a ruffly skirt, but why does she always have to do it in heels? I mean she totally can if she wants to, and the fridge magnet about Ginger Rogers and Fred Astaire still makes a good point, but there are other lessons to be learned here as well.

Honestly, I just find it depressing to keep watching the scene where the guys are all surprised that the expert is a woman. Why are we still telling this story? Instead of creating new, improved associations for everyone to base their assumptions on and letting those guys know they’re flat out expected to stop making that mistake, we just keep telling ourselves the same old story again and again. It’s like some kind of feedback loop.

I don’t think we’re ever going to get away from telling stories about reading each other wrong, any more than we’re ever going to be able to stop making erroneous assumptions about one another. We know better than to judge things based on appearances, but we often don’t take the time or make the effort to look past the surface. There’s a reason that the original fairy tales were full of deceptively beautiful things that were evil, and ugly creatures that could make your dreams come true. Some of the most popular stories now are about good vampires and shallow, bitchy beauty queens. Until we’re able to truly shake the belief that being physically beautiful is better, we’ll keep finding it interesting to hear about times when that wasn’t true.

I think that at the same time as we all hate being wrong, on some level we also want to be mistaken in this. We want the surprise of finding something unexpectedly wonderful, and the feeling of being exceptional by association because we’re the only ones who can see how wonderful it really is.

alex MacFadyen tries to remind himself that always having reasons why you acted like a jerk is a way of avoiding taking responsibility for acting like a jerk, which pretty much makes you a jerk all over again.