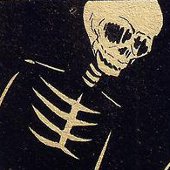 Lord Death Man is a villain in Chip Kidd, Geoff Spear and Saul Ferris’s Bat-Manga! The Secret History of Batman in Japan (Pantheon, New York: 2008), which collects stories written and drawn by Jiro Kuwata for Shonen King magazine in 1966 building on the popularity of the Adam West Batman tv-show. “Lord Death Man” is one of the two complete stories in the collection. (The other is, “The Man Who Quit Being Human!”).

The story opens with billionaire Bruce Wayne and his “assistant,” as Kuwata has it, Dick Grayson seated at a jewelry exhibition. The affair is interrupted when the lights go out. With a laugh “as if from the depths of hell,” Lord Death Man appears in all his phantasmagorically skeletal glory, brandishing a machine gun, backed up by other skeletons and warning Gotham’s 1% not to interfere in his heist. After a fantastic, action-packed chase, Batman and Robin capture Lord Death Man and bring him to court where Lord Death Man scoffs at the idea that anyone could execute him, then collapses onto the courtroom floor, dead.

Afterwards, Bruce Wayne is haunted by nightmares of Lord Death Man taunting him from beyond. Bruce’s solution? A Jamaican vacation with Dick Grayson. But even on the beach, they cannot escape Lord Death Man. A radio interrupts what I can only assume is some excellent 1960s Japanese group sounds with the news that Lord Death Man has risen from the grave and murdered someone. If this were a Lord Death Man comic, I’m sure the murder would be part of a electroyfingly elaborate and satisfying scheme, but this is a Bat-Manga, and we only see the edges of his plans as Batman pursues him through a 4-part adventure, ultimately confronting Lord Death Man in a graveyard.

While I particularly like Lord Death Man, I also like Bat-Manga‘s Bruce Wayne and Dick Grayson. This jet-setting Bruce Wayne will take a trip to Jamaica to get his mind off his problems. Dick Grayson is sassy, telling a woman, “If Bruce bought jewelry for every woman who talked to him, he’d be broke in no time!” Aside from his disrespect of his elders, he’s very much the smart little boy sidekick from so much 60s Japanese pop culture, though he does not wear short-shorts. Also, Batman says, “Rats!”

While it’s well-grounded in Japanese action-adventure,“Lord Death Man” also reminds me of European (and Turkish) super-criminal stories about Fantomas, Diabolik, Kriminal, Kilink, Sadistik and Satanik. (In fact, the film version of Kriminal came out the same year as “Lord Death Man”).  These stories are sort of 1960s Jet Age tech-focused updates of older pulp serials, where gangsters rub shoulders with robed figures in dark subterranean lairs, plotting schemes and transmitting doom via wireless.

Why wear a robe or a skeleton suit while wielding an automatic weapon? Why not something more practical? Supervillainy is all about aesthetics—the elaborate plans, evil laugh, terrifying name all guided by overarching tropes, such as “death.” Supervillains have many disparate and seemingly crazy goals, but, as I’ve argued before, what they have in common is an aesthetically-driven life. And one thing Lord Death Man shares with his super-criminal colleagues mentioned above is a passion for skeleton suits. His skeleton suit isn’t as garish as Kriminal’s yellow suit, as reptillian as Sadistik’s or as potentially matchy-matchy as Kilink’s black accessories with black and white suit. His take is a restrained one—a skull mask, black and white bone suit daringly paired with brown gloves, belt and knee-high boots. You wouldn’t think the brown accessories would work, but they do.

And while Kilink’s power is killing, Lord Death Man’s is already being dead. As he explains, referring to himself in the third person villainous, “The Lord Death Man can die and come back to life whenever he wants…” Lord Death Man further plays with his theme by escaping in a hearse and having his henchmen burst out of graves. Further, Lord Death Man not only uses his henchmen to ambush Batman and Robin, but to feature himself to best effect. Their black uniforms with black masks, white eyes and jack-o-lantern smiles really make Lord Death Man’s skull pop. 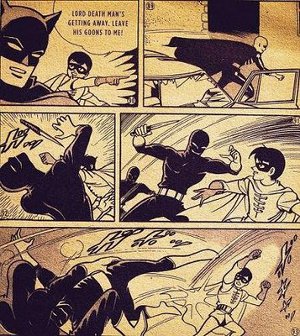 Bat-Manga! is action-packed and completely charming. And I like Kuwata’s style. I wish that there were more stories this vital and imaginative. People who want a more fun comic experience are sometimes accused of nostalgia, but comics have been dark and gritty for a long time now. I suspect the nostalgia driving the industry is one for that first reading of The Dark Knight. In a recent interview, Ursula Le Guin discussed the last 100 or so years of fine art, saying, “What’s new in art? We’ve been shocking the bourgeoisie since 1890.” Batman comics have been revolting against Adam West and, through him Dick Finger and Bill Sprang, since the 1980s. If there were more comics like the ones collected in Bat-Manga to dispel the gloom and get the grit out of my eye, I’m all for it.

As well as reprinting Batman stories, generously donated by collector Saul Ferris, Bat-Manga! also features gorgeously fetishistic photographs of Japanese toys, ads, merchandizing and bat-whatnot. It makes for a stunning softcover coffee table book, but one you don’t open widely because the weight of the pages and the glue binding means that, eventually, sections of the book will pull out of the cover. Bat-Manga! is pretty, worth-reading and simultaneously difficult to read—heavy, awkward, kind of fragile and optically busy. Did I mention that it is pretty and worth-reading?

Carol Borden wrote this piece as her inaugural post for the Mysterious Order of the Skeleton Suit. Click through to the Order’s site, if you dare.

If you want to see more Lord Death Man, check out the Batman: The Brave and the Bold Episode,“Bat-Mite Presents: Batman’s Strangest Cases!” or Grant Morrison’s graphic novel, Batman, Inc.