Time loops and the failures of memory

Memory is an unreliable narrator. It seems so absolutely sure of itself when it’s telling you things that it’s easy to forget it can’t wholly be trusted. There are always gaps and discrepancies, sections that get revised in light of subsequent events or reshaped to soften the sharpest edges. Our memories, like our brains and our bodies, are such an odd combination of incredibly resilient and terrifyingly fragile. It makes the sudden absence of memory and history both an appealing archetype and a useful plot device. In very broad strokes, the kinds of films I’m thinking of fall under two categories: no one around you remembers what’s happening except you (time loop), or everyone around you remembers what’s happening except you (amnesia).

As a plot device, memory loss can be either silly or serious. Time loop films often play it for comic effect, and Groundhog Day is arguably the classic gold standard. Bill Murray plays Phil, a local TV weather anchor who gets assigned to report on the annual Groundhog Day festivities in Punxsutawney, Pennsylvania. He hates it with a passion and is a complete jerk with everyone for the whole day, then wakes up the next morning to exactly the same day over again. And again, and again, for what seems to be roughly 10 years. No one else remembers any other version of the day except Phil, and everything repeats exactly the same each time except for their reactions to anything he does differently. His response moves from confusion, to pushing the boundaries and doing whatever he wants, to hopeless despair at his predicament, to taking advantage of the time to learn how to do everything under the sun, but each morning he 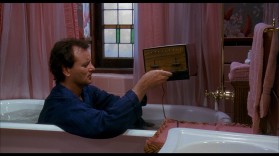 wakes up to the same day. The ending implies that the answer to how he can escape is to evolve into a decent, compassionate human being, but it takes him an absurd number of groundhog days to get there.

In a time loop, there’s almost always a key that will let you escape. There’s something you’re supposed to do or learn, and once you figure out what it is you get to move on. With genuine memory loss though, there’s often no way out. Amnesia usually only affects one type of memory, either procedural (automated skills you’ve acquired) or declarative (facts you’ve learned and events you’ve experienced). It can also affect muscle memory, but your body may still remember movements without your conscious mind being able to connect them to any particular use or skill. Retrograde amnesia is the inability to recollect memories from before a trauma or event, and anterograde amnesia is the inability to create new memories afterwards. Despite all of the cardboard cut-out film clichés of a bump on the head that conveniently erases some critical memory, amnesia is very uncommon and retrograde amnesia is rarely so isolated. The most familiar and common loss of memory is associated with Alzheimer’s and dementia, which is a whole other genre of film.

50 First Dates is a romantic comedy that cleverly combines the time loop and amnesia plot devices, even if it does stretch the definitions of amnesia. Adam Sandler plays Henry, a bit of a player who goes on a date with Lucy (Drew Barrymore), who turns out to be anterograde amnesiac who wakes up every morning with no memory of what happened the day before. They have what seems to be a great first date, but the next time he sees her she has no idea who he is, so he takes it as a challenge to pick her up and make her fall in love with him over again every day. What is new each time for Lucy is essentially a modified time loop for Henry, who remembers all of their 50 first dates and genuinely falls in love with her over time. The premise encompasses a variety of comic scenarios and it has a fluffy happy ending, but there is some sensitivity in how Lucy’s family handles her condition. The way they wake her up by playing videos of her life and loved ones was actually used as an inspiration to help dementia patients.

Memento is an example of a serious film that makes creative use of a relatively realistic portrayal of anterograde amnesia as a plot device. The protagonist is Leonard (Guy Pearce), who sustains a brain injury which damages his ability to create any long-term memories. He retains his memories from before the injury, but he forgets everything that happens to him after that within fifteen minutes or sometimes sooner. He has a tattoo across his chest that reminds him that a man named John G raped and murdered his wife so he’s made it his mission to hunt him down, but the only way he can do that or survive in general, is to create a collection of external memories for himself using anything he can, from notes on the backs of Polaroids to facts inscribed on his skin. His body and his home become a physical manifestation of his past, a gallery of the internal space that everyone with a functioning memory can visit whenever they want.

The film also flows in different directions through time, which is a very clever and well-executed way of mimicking content in form. Most of the scenes happen in reverse order with one specific sub-plot that runs forwards, and the whole film ends in the middle, converging in much the same way that Leonard’s life stretches backward and forward to the moment that the act of remembering changed for him. The discrepancy between the order of events and how they are strung together in the film’s narrative pulls the viewer into Leonard’s experience of chronological displacement. 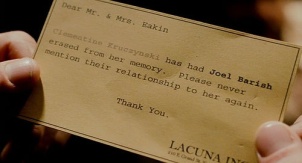 Joel meets Clementine on a train and they connect without realizing that they have actually already been in a relationship which failed miserably. They both hired a company called Lacuna, Inc. to erase the memories of their time together. In the absence of any points of reference for learning and avoiding the same mistakes, the consequence is that they end up repeating the experience rather than removing it from their lives forever as planned. Joel initially resists losing his memories of Clementine, and as the current story unfolds, the film also shows him recalling the relationship in reverse as they slowly disappear. Like Memento, it makes use of anachronic order to convey the strangeness of experiencing chronological events out of sequence.

Memory loss poses a question that many people never really have to face, which is who are we and how do we move through time without our memories? We all have the experience of forgetting something important, or the disjunction of discovering that the way we remember something isn’t the way it happened, but having no access to memory at all is hard to fathom. Of course existence in the present moment has meaning independent of the past, but it must be a very different meaning.

One of my favorite musings on memory is an episode of the Judge John Hodgman podcast called “Rashomom” in which an adult mother and daughter come to Judge John to settle a disagreement about whether or not there was a grey house up the road from where they lived when the daughter was a little girl. They each have a different memory, but what they’ve done with that experience is fascinating: each time they encounter one of those gaps where their memories of something don’t match up, rather than arguing about it, they consign it to the “grey house universe,” a separate reality where both versions can coexist without them having to resolve the discrepancy. To find out how Judge John resolves their dispute you’ll have to listen to the podcast, but my verdict is that everyone should have a grey house universe in their lives.

alex MacFadyen sometimes wonders what it would be like to live in that grey house.

Alex MacFadyen is a muppet-identified writer, bookworm, and creator of strange liminal creatures. You can find more of his creations and musings at Critter Lab on Wordpress. View all posts by Alex MacFadyen