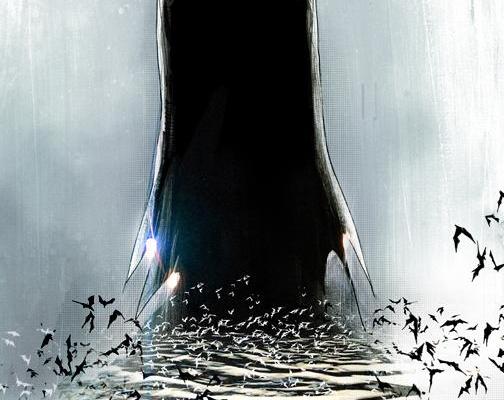 Summer’s come early this year, with the hum of air conditioners and fans in the air and the grass peacefully brown beneath my feet, the fireflies rising into the trees and all around the internet, Summer Top Ten lists are in bloom, from the Top Ten YA Summer Reads to the Top Ten Summer Eggplant Recipes and  Top Ten Summer Jams. Yes, it’s time to get your summer organized because what fun is leisure if it’s leisurely? And as a tiny part of the internet media, it’s part of my job to peel onto the information superhighway in the Gutter’s Pontiac Firebird Trans Am (one of the Top Ten Summer Cars) and outrun Smokey to get you some books.

So kick back with a cold one and enjoy these 7 summer reads suitable for beach, bedroom, porch or patio.

The Black Mirror is a chilling read sure to keep you cool on a hot day. It’s a book about family, what seems a more ordinary evil in a world of supercriminals and the fear that there is a corruption at the heart of Gotham City. Batman Dick Grayson investigates the daughter of the man who executed his family. Meanwhile, Commissioner Jim Gordon struggles with the return of his son, James. His daughter Barbara Gordon (Oracle nee Batgirl) believes James is a serial killer and Jim is torn by suspicion that James is.

Dear Creature tells a very sweet love story between the agoraphobic Giuletta and the human flesh-eating, Sea Mutant who speaks in iambic pentameter Elizabethan English and discovers the bottles containing pages of Shakespeare Giuletta throws into the ocean. It’s a lovely book and very portable for all your adventures, while satisfying any need for a summer romance in the form of the evergreen story of a gillman and his lady love. The only question is whether this story is one of the Bard’s comedies or his tragedies.  And that, as always, is best discovered for yourself.  Plus there are Shakespearean clowns in the form of three crabs who live symbiotically with the Sea Mutant. In an epilogue, Said crabs also provide instruction in iambic pentameter. Well-written, beautifully drawn–I’m amazed that this book is Case’s first graphic novel.

I know a lot of people feel sparkling and paranormal romance are ruining their vampires, but I am way more bored by the new corporate crime family vampires. They have made me yawn. They have made me sad. They have made me exclaim, “What a terrible way to spend eternity!” I would take a romantic or Schrecky vampire* over a business vampire any day. Well, except for today, because it turns out that, like anything, when it’s done well, the vampire as bloodsucking capitalist conceit can still be fresh and interesting. In Dracula: the Company of Monsters, a foolish CEO raises Dracula, aka, Vlad Teppes, hoping a vampire can give his company an edge in elaborate corporate shenanigans and discovers that maybe a medieval prince isn’t as easy to control as he thought.

Echo is excellent science fiction by any standard, grounded in contemporary math and physics without being detached from the human world. It reminds me of William Gibson’s Pattern Recognition. Photographer Julie witnesses—and photographs—an explosion high over the desert. Fallout rains down, covering her in the remains of a suit that might be a weapon or might be more. Pursued by the army and a military contractor’s agents, Julie Martin meets up with Dillon, a park ranger who investigates the incident and whose girlfriend created the suit.  Both are tracked by National Security Agent Ivy Raven.  Echo is the best science fiction I’ve read in a while, and it’s also a nice thick book perfect for staying up too late reading or engrossing yourself on a patio, porch or verandah.

There’s a long tradition of Chinese wuxia crime fiction, probably most famously the novels of Gu Long. Unfortunately, not many wuxia novels have been translated into English, and most English-speakers are familiar with wuxia mysteries only from movies like the recent Detective Dee and the Phantom Flame, Wu Xia and adaptations of Gu’s books like Chor Yuen’s Legend of the Bat and Clans of Intrigue, starring Ti Lung as the swordsman detective, Chu Liu-Hsiang.  Even fewer stories of  Judge Bao Zheng are available in English. But now we have Judge Bao and the Jade Phoenix, Marty and Nie’s take on the legendary judge who became so synonymous with justice that he now symbolizes it. While traveling with his entourage, Judge Bao is approached by peasants who beg him to listen to a dying woman’s story. She claims her son was falsely imprisoned. Soon Bao hears dozens of stories of false imprisonment and decides to investigate. Admirers of photorealism will like Nie’s art. Personally I’m amazed that he seems to have used scratchboard as his medium for the whole book.  The Jade Phoenix is an excellent mystery to take anywhere—it’s hardcovered and half the size (6 x 8 in / 15 x 38 cm) of a standard comic collection. I can’t wait for more.

Franken-Castle is insane and that’s why I love it so. It’s the same kind of delirious mash-up that makes me love Planet Hulk and Sherlock Holmes and Kolchak: The Night Stalker: Cry of Thunder.  It has the same twisted genius and the same sense that wouldn’t work as well in any other medium.  The Hulk works as a kind of John Carter of Mars, Holmes and Kolchak believably solve a mystery together, and the usually deeply serious Punisher, Frank Castle, works as a man dismembered by Daken and reassembled by Morbius to save the denizens of Monster Metropolis from soldiers determined to kill them.  I had lost my faith in the existence of awesome, and Franken-Castle has restored that faith.  In fact, unsurprisingly, I prefer FrankenCastle to most versions of The Punisher, save The Tick‘s Big Shot and Greg Rucka’s new run on the title.

Like Echo, The Sword concerns an average woman, Dara, who comes into possession of a powerful weapon with unforeseen side effects. And like Echo, The Sword features well-rounded and well-drawn female characters. And both are grounded in the contemporary world.  But where Echo is science fiction, The Sword is fantasy based on Classical Mythology. And where Echo‘s weapon was designed by human beings, Dara finds a sword forged millennia ago by demigods in Minoan Crete.  The sword gives Dara extraordinary powers and makes her a target of those gods who, like the Classical Gods, are petty, mean, spiteful and consider human beings very much beneath them. And these gods want the sword very badly and have killed Dara’s family to get it.

*Please, someone upload footage of Prince of Lies from Angel, “Why We Fight.”

Now if you’ll excuse her, Carol Borden has a long way to go and a short time to get there.