“There’s nothing wrong with G-rated movies, as long as there’s lots of sex and violence.”

– Elvira, Mistress of the Dark

Once upon a time, long, long ago, when Netflix and TiVo were just a twinkle in the ether, there was a boy who loved going to the video store. His usual haunts were small, dark independent stores tucked around corners or in basements, stocked with an eclectic mix of classics, oddities and trash. But sometimes, when he was feeling tired and lazy, he’d slouch around the corner to Blockbuster.

What the boy didn’t know was that there was a hidden artistic price for his sloth. Although Viacom/Blockbuster does not edit their movies, and this particular boy has no idea what they currently do, in this long ago time they did order “edited for content” versions of movies from studios. This is a lesson the boy learned the hard way, at the cost of watching two of his favorite films disembowelled before his eyes.

Clint Eastwood‘s 1973 spaghetti-western-style gunslinger film, High Plains Drifter, and John Woo‘s melodramatic 1989 Hong Kong action film, The Killer, are both violent movies. Intense, artistic, thought-provoking and ethically complex, but violent. Both narratives rely heavily on specific brutal incidents to justify the characters’ actions and both films draw much of their irony, pathos and moral ambiguity from how those acts of violence radiate out over time.

In High Plains Drifter, a nameless gunslinger commonly referred to as “the Stranger” rides into town and immediately shoots three other gunslingers. Rather than charging him with murder, the townspeople decide to hire him to protect them from yet three more gunslingers who are due to be released from prison and are seeking revenge on the town. Through the Stranger’s dreams, it’s revealed that what the three men were sent to prison for was bullwhipping the previous Sheriff to death while the whole town stood by and watched.

The Stranger trains them to defend themselves and tasks them with painting their entire town bright red. When the preacher asks him, “You can’t possibly mean the church too?” he says, “I mean especially the church.” The Stranger rides out to the town’s welcome sign and paints ‘Hell’ over ‘Lago’. After the townsfolk have finished painting everything, he rides away and leaves them at the mercy of the gunslingers. He returns later to kill the gunslingers, and on his way out of town he passes one of the two characters who ever tried to do the right thing. He’s carving an RIP gravestone for the murdered Sheriff, and he says, “I never did know your name,” to which the Stranger replies, “Yes, you do.”

Anyone laying bets on what didn’t make the cut in the edited version I rented? Among other things, the bullwhipping. Wow, that whole devil-comes-to-town-and-paints-it-up-like-hell thing sure doesn’t seem quite justified without the violence of the initial act. It’s upsetting to watch, sure, as is the part where the Stranger rapes a woman near the beginning (also cut), but it’s supposed to be upsetting. We live in a world where women have to deal with the ongoing possibility of rape and people stand by and let terrible things happen to one another. Anyone who participates by action or inaction is morally compromised. The ethical complexity and emotional impact of a film like this is effectively neutered by minimizing the violence and removing the prime motivation for the action.

Where the edited version of High Plains Drifter made about as much sense as a punchline without the joke, The Killer ended up like a joke without the punchline. Chow Yun-Fat is a hired killer, Ah Jong, who accidentally damages a young singer’s eyes during a gunfight. He starts coming to the club to watch the girl, Jennie, sing and one night he rescues her from being attacked on the street. He begins to visit her and learns that she can avoid going blind if she can raise enough money for a corneal transplant. He decides to take one last job to get her the money, but the Triad leader who hired him arranges to kill him rather than paying him. 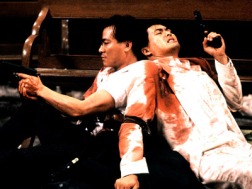 Ah Jong works out a way to get the money but the Triad is still after him, so he asks his friend, Li, to make sure that if he dies, his corneas get donated to Jennie or the money is used to send her abroad for surgery. In the final shootout, which I understand involves killing more people than the rest of John Woo’s American films combined, the Triad leader shoots Ah Jong in both eyes. He and Jennie crawl blindly past each other on their stomachs, unable to find one another. Then he dies, and Li gets himself arrested for shooting the Triad leader.

The edited version didn’t censor out all the bleeding and dying, but it did omit the part where he gets his eyes shot out. It cut directly from the standoff with the Triad leader to Jennie and Ah Jong inexplicably crawling past each other on the ground. Huh? I’m not sure I would have understood what happened at all if I hadn’t already seen the film. Who looked at this movie and thought, ‘that’s too violent, we’ll just take it out?’ Who looked at this movie and thought ‘let’s edit it for violence?’ Why would anyone who was offended by violence ever want to watch this movie?

This question leads me to Clearplay, a dvd player that allows viewers to customize their “tolerance settings” for content such as violence, sex or nudity in a selection of films. “Strong profanity” is pretty self-explanatory, but what exactly gets edited out if you choose to filter for “disturbing images” is up for debate. Dubbed as “the safest way to enjoy movies with your family,”  it suggests you “set content preferences based on your family values” and the player will “filter out the images and dialogue you don’t want.”

“It definitely doesn’t take anything away from the actual movie,” claims one of the customer testimonials on their website. I keep imagining Austin Powers filtered for “crude language and humor,” or Glengarry Glen Ross filtered for “cursing.” Some movies are made solely with profit in mind, but most are based on an artistic vision of some kind. A combination of writers, directors, producers, cinematographers and actors created them that way on purpose to show you something. You may like it or hate it, maybe it’s successful or maybe not so much, but you can’t excise and rearrange it in whatever way you choose and still get the same value out of it.

That said, the things we watch are constantly edited for content, edited for time, edited to fit your tv screen. Much as I think

removing content from movies is missing a fundamental point about art and life, it’s absolutely fine for people to choose what they do and don’t want to watch, and in the case of Clearplay people are making a choice. With my accidental Blockbuster experience however, that was not what I thought I was paying for. How could I have guessed that anyone would try to edit those films for violent content?

Here’s a tip for y’all: if you don’t want to watch any killing, don’t watch movies about hired killers.

alex MacFadyen also recommends checking out this entertaining thread about receiving cold calls from the Dove Foundation, a non-profit organization “dedicated to advocating for families and moving Hollywood in a more family-friendly direction.”