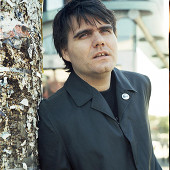 The Cultural Gutter turned ten in May, 2013 and we didn’t make much of a fuss about it. But ten years ago this week, Jim Munroe posted the manifesto that’s guided The Cultural Gutter, even as each subsequent editor has joined the Gutter and added their take on our mission. We thought this would be a good time to celebrate our mission and republish it. (And congratulations to our friends at the Hand Eye Society on their fifth anniversary this Friday).

For a long time, I’ve always felt a little weird about the third question people ask me at parties.
“What do you do?”
“I’m a novelist.”
“Oh! Really! Have you had anything published?”
“Yep, I have three books out there.”
“What kind of writing is it that you do?”
“Well…it’s kind of science-fiction influenced stuff.”
You see the side-step there?

“Good Lord, I’m writing another one!”

But when I started on my fourth book, I realized: “Good Lord, I’m writing another one!” I am drawn to the genre–my mind leans toward creating stories like this. I like writing in a genre that is more interested in the mechanics of lightspeed than the mechanics of a well-turned phrase–equally esoteric pursuits. This unpretentiousness, this lack of pressure to be a genius, lets me tell the story without consciously twisting a sentence into an artistic shape or clumsily dabbing the landscape with symbols. Plus, I like robots.

See what I’m saying about the not-taking-it-seriously-enough stuff?

Well, c’mon. It’s SCIENCE FICTION. Intelligent people, on the whole, dismiss it as juvenile — the puerile fantasies of teenagers. They cede it might be entertaining, certainly, appropriate fodder for blockbuster movies, but it’s not really literature.

And I’m happy they think that.

A few years back I started getting really interested in video games–playing them, making them, talking about them. And I noticed that there were marked similarities in people’s cultural perception of video games and science fiction.

I would talk with my friends about my experiences with video games in the same way that I’d talk about a movie or another piece of art: “In most games, you smash open a crate, you get either weapons or supplies that you can pick up, or it’ll be empty. But in Half-Life, even the empty crates have something–you get this randomized pile of computer parts motherboards or whatever, it’s a great touch.”

My appreciation for a game’s detailing, tone, and visceral engagement would usually get a laugh despite my sincerity. The disparity between applying high art analysis to low art, or even talking sincerely about something so frivolous, was a clear violation of mainstream cultural norms.

And I like violating those norms. The same way that I enjoy hearing people tell me: “I don’t like science fiction…but I like your books!” I like to think that this begins to erode a bias, that it prods people to form their own taste rather than lazily deferring to filters like corporate media in either their publishing or reviewing capacities.

I made another connection between games and science fiction when I was reading an article* on http://www.RobotStreetGang.com. It was about how videogames were being written about in the way that comics were being written about a decade ago–when the term “graphic novel” was coined–where comics were being touted as the new literature, and comics like Watchmen were being studied in universities. The article brought up the point that although comics had certainly changed since then, they hadn’t become respectable, and that the same was likely to happen with video games. Irredeemable. Comics, science fiction, video games, and lately even porn–declared Worthy of Note, but rolling like errant pennies back into the gutter.

There’s a line of argument in the fandom of science fiction, gaming, and comics that this is a great injustice, that these genres should get more respect. I say the hell with that. There is a lot of great art being made in these genres, there’s also a lot of crap–case in point, Philip K. Dick. Some amazing books, gripping and enthralling stories that communicate perfectly his paranoia to the most balanced of readers. Some crappy books that feature LSD gas, LSD darts, LSD cola, and plotlines only an acidhead could make sense of. But I would argue that while his oeuvre wasn’t consistently good quality, there’s something fascinating about each book, even if it’s watching Phil scratch his itch.

But gutter genres aren’t known for their subtlety. In fact, their obviousness and their barenakedness is why they’re destined to remain beneath the radar of Serious Culture–and why they will continue to thrive despite this. Where else can you experience dreams of power and heroism as directly as through a superhero comic? Or take out your aggression as primally by smashing in the face of a digital opponent? Meet the Other as obviously as on a voyage to another planet? Indulge a sexual peccadillo either mundane or less-mundane?

I mean, it’s obvious that anything that is as upfront and honest about what we fantasize about as a species is of immense cultural value. But don’t tell the intelligentsia–if they caught on, it would take all the fun out of it.

*We know that the link is dead. We’re leaving it in so we can use the URL to help find this article if it is every posted online again. ~editor.

View all posts by nomediakings