Return To The Planet Of Monkeys vs. Robots

Who will surpass us, our cousins or our creations, as non-human apes litigate in court, Dr. Zaius replaces Mark Twain, the Black Lesbian robot movement gains traction, and  “brain linked monkeys form a super-organism” to control robot arms with their minds? Perhaps the real question all along has been: When will the monkeys and robots join together and use psychic robo powers to overthrow humankind?

Is it already too late?

Hei Hei is the only true monkey in this list. The others are all, like most of the rest of us, apes. When paralegal Angie Huang goes to work for the legal practice of Jennifer Walters (aka, She-Hulk), her spider-monkey Hei Hei comes to work with her. Hei Hei and Angie have a mysterious connection worthy of Hellboy and B.P.R.D. There might even be some ectoplasm or perhaps a soul. But I like that, despite the sometimes eerie relationship between Angie and Hei Hei, Hei-Hei is always a monkey. Also, it’s cute when Hei-Hei takes dictation with a little pad and pencil. And while She-Hulk might be over, since Howard the Duck rented space in Jennifer Walters’ building, you can still see Hei-Hei in Howard The Duck. (It’s really good when Hei Hei hisses at Howard).

King Solomon is the very proper English gorilla companion to Tom Strong, a “science hero” dedicated to pulptastic adventure. King Solomon’s super-intelligent and skilled in engineering, combat and the butling arts. And like his evil French counterpart Monsieur Mallah, King Solomon is the result of experimental brain surgery. Tom Strong might have given King Solomon the ability to speak, but I believe in my heart that King Solomon’s anglophilia is his own. King Solomon also gives us hope that one day, perhaps, robots and ape-kind can live together peacefully. He might snipe at Pneuman, the steam-powered robot, but I’m pretty sure there’s true friendship behind their sibling rivalry.  (In fact, could this rivalry have been artificially manufactured by Tom Strong, the nearly perfect man, to maintain his suzerainty?)

Before he became a talking chimpanzee, Marvin was a voice actor who voiced the cartoon character, Mr. Chimps. After Marvin’s death, his soul followed his grandson Scott as Scott wanders into the zoo. He ends up spilling his whole story about being a were-terrier and his relationship with his grandfather to a chimpanzee. When he finishes, the chimp answers Scott in the voice of his grandfather. Scott breaks Marvin outta animal stir, and takes him home. Marvin starts dressing in a robe and boxer shorts, smoking cigars and using his feet to hold his scotch glass. Scott wants to hide his chimpanzee grandfather till he figures something out, but Marvin wants to live his life.

There are so many good apes to choose from in the various Planet of the Apes series–old favorites like Dr. Zaius and Dr. Zira and new favorites like retired gorilla solider and current lawyer with an eye-patch, General Aleron, and the daring scientist, Prisca. But right now, my heart belongs to Dr. Milo, ape mad scientist. Bechko, Hardman and Laming re-imagine Dr. Milo as a chimpanzee Tesla, and what is cooler than that? 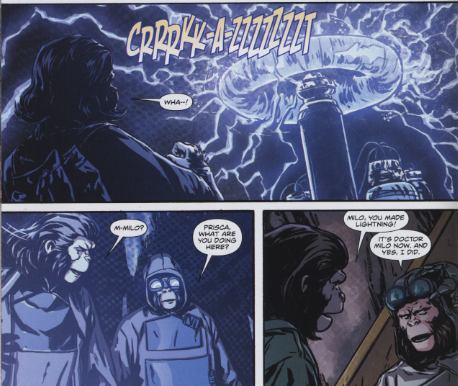 Alex has been gloomy since a bad break-up. Worried, his aunt sends him a companion android, a Tanaka X5—the most lifelike. Alex is creeped out by the implications of owning what seems like a person and creeped out what other people will think of him owning a fembot. But he names her, Ada, and decides to let her stay for a while. Alex discovers that all the X5 robots are capable of sentience, but have this feature blocked because of the public’s fear of sentient androids after a terrorist incident years ago. Uncomfortable with Ada’s Stepford Wives affect and responses, Alex decides to activate her sentience with the help of  an underground android-human alliance. Alex + Ada follows Ada as she discovers her own personhood, her likes and her dislikes and her own feelings for Alex as she navigates a world in which she must pretend to be an appliance or risk being destroyed. It’s a very thoughtful book and I appreciate Ada standing up for her own agency, even when Alex thinks he’s protecting her agency.

It’s another character created by Bechko and Hardman! AG-37 is the nicest assassin droid you’d ever want to meet. Well, maybe not nicest. But the most like a bone-weary gunfighter or old ronin who’s decided to leave that life behind him and instead make a living smuggling stuff in his apparently janky freighter. (Everything janky in the Star Wars universe is more than it appears, and everything shiny and new screws up more often than not). He’s a good friend to Ania Solo, the junkyard owning great-granddaughter of Han Solo and Leia Organa, and a fine example of the often unaddressed line between “sentients” and droids in the Star Wars universe. If he were voiced by anyone it would have to be Takeshi Shimura.

Ghost Robot is a mysterious–and very empathetic hero–in The Venture Bros. cartoon. By day he is mild-mannered Weatherbot 5. By night, he is Ghost Robot, fighting crime with the Super Gang and going undercover with the Office of Secret Intelligence! He is possibly a haunted or possessed robot. Or a robot that died but can’t really die because it’s a robot. Or a robot that died and came back and now has a ghost inside it where its living parts might’ve been. But you know what? I really don’t care. I just know that I like ghosts and robots and Ghost Robot is (probably) both. He’s fun to think about.

I’ve never really been a fan of Nick Fury. He seems like a jerk in the old comics. He is cool now, because Samuel L. Jackson is cool, but if anything he seems like more of a jerk. But I’m kind of fond of the Nick Fury “Life Model Decoy.” He’s still jerkish, but has just a little hint of ennui to him. Plus, he likes beer. A lot. Apparently, S.H.I.E.L.D makes life model decoys of everyone, including their commander, just in case, because what could possibly go wrong? Nick Fury’s brother Jake “Scorpio” Fury is bitter and having an excellently Seventies Marvel Mid-Life Crisis. So he becomes a supervillain and starts literally making friends, each of which he names after a sign of the zodiac, ’cause  he’s hip, kids. But he also acquires a life model decoy of his brother from S.H.I.E.L.D. (i.e., from his brother) to help him in his even scheme to kidnap Jack Norriss, Nighthawk Kyle Richmond and Moon Knight and drink beers with them.  Scorpion tells his robot brother, “Now, it is time for you to collect Jack Norriss from those unwitting fools! Pick up some beer on the way over, too–I don’t want our hostage going thirsty!”

Fury does pick up beer. Then watches as Scorpio shows Norris his terrific pad and tries to kill Moon Knight (after giving Moon Knight a beer). Seriously, a lot of beers. Mostly Schlitz.

When She-Hulk infiltrates Victor von Doom’s castle outside his capital city, Doomstadt*, she is confronted by a giant Doombot. Doom, like S.H.I.E.L.D. and the Tanaka Corporation, enjoys building robots that look like people. But he’s a little more honest, I think, and makes all his doombots look like him. Most of them are human-sized, but This Gigantic Doombot is kaiju-sized and kind of adorable. So, as with Mod Gorilla Boss, I present this panel as another demonstration of all that is good with comics. I love you, This Gigantic Doombot.

X9 is another sad robot in the rain, another robotic assassin. X9 works for Aku and he’s been hired to take out Samurai Jack. He doesn’t like his job anymore, but unlike AG-37, he can’t get out of the hitman business. He sits in his car the rain and talks to his dog, Lulu, sweet thing. He’s very 1940s noir, with a narration and a fedora, jazz and sadness and one good thing in his life. And it makes a kind of sense, because he has the same code name as Secret Agent X-9, a comic book character created by Alex Raymond and initially written by Dashiell Hammett. (I wrote a bit about him here, in one of my first pieces at the Cultural Gutter). X-9 was a secret agent who posed as a private detective. The strip ran from 1934 till 1996. X9 became a popular anthology comic book in Sweden, and Corrigan shared stories with the Phantom and Modesty Blaise. And there was a 1945 film serial starring Lloyd Bridges as Phil Corrigan as Secret Agent X-9.  Secret Agent X-9 has gone through some changes, but his life isn’t as tragic as X-9’s.

*“Doomstadt” is fun to say.

Carol Borden is still pained by calling apes, “monkeys,” but it works in this piece, so she’ll just go with it and hope that in the end the non-human apes forgive her. Also, please consider donating to the Cultural Gutter’s fundraiser, Gutterthon 2015, aka, “Naked Gutterthon.” There’s only a little over a week left. You contribution helps us keep our commitment to paying writers and supports thoughtful writing about disreputable art. And we have some sweet perks.

Carol Borden has written for Mezzanotte, Teleport City, Die Danger Die Die Kill, Popshifter and was a writer for and editor of the Toronto International Film Festival’s official Midnight Madness and Vanguard program blogs. She’s written a bunch of short stories published by Fox Spirit Books, including Godzilla detective fiction, femme fatale mermaids, an adventurous translator/poet, and an x-ray tech having a bad day. Read and listen to her other shenanigans at Monstrous Industry. For her particular take on gutter culture, check out, “In the Sewer with the Alligators.” View all posts by Carol