I hope you enjoy mysteries of all kinds as mystery abounds in these suggestions, including: Mysterious interdimensional travel through a mirror; sea creatures in peculiar places; space mysteries and adventures; terrestrial mystery, even one about the comics world itself; incomprehensible love; and a hardboiled fantasy mystery.

There’s even some curious history, if you like learning and laughing. Histories, like mysteries, are an important part of summer reading. Dejah Thoris and Barbarella at the bottom of the sea.

It’s too bad Dr. Gitu is murdered on the second page of “Conceptually Exploiting the Construct of Time,” but his death brings us the fun of pulp icons Barbarella and Dejah Thoris of Barsoom, aka, Mars, teaming up to discover why in space hell someone would murder an adorable space scientist. Barbarella and Dejah Thoris are not alarmed by mirrors they find, respectively, in a murdered scientist’s lab or somehow unaffected by the pasage of time under tons of sand. In fact, they are entirely willing to touch such mirrors, traveling through them to an oceanic world where they work together to save the world and solve Dr. Gitu’s murder. García’s art and Duke’s colors are both charming and delightful. I haven’t finished the four issue series yet myself.  It’s part of my own planned Summer Fun Time Reading ’19. 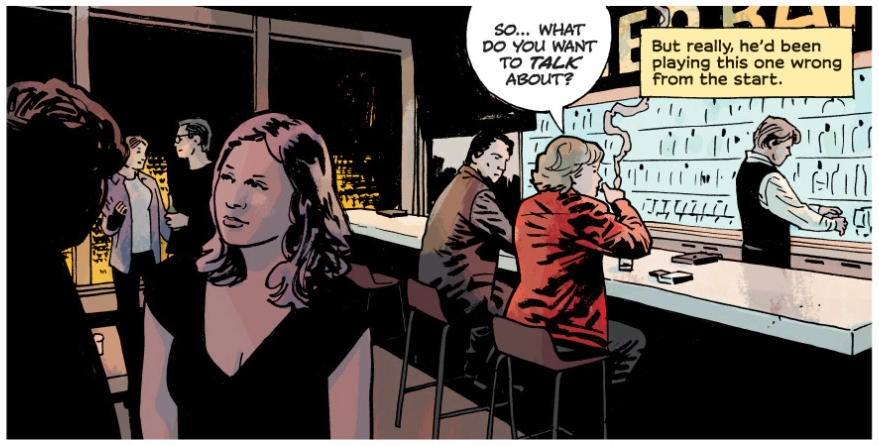 Criminal is back with stories of people–mostly men–making mistakes and paying for them. You might’ve thought you could walk away from Criminal, but here it is, dragging you back in again. Teeg and Ricky Lawless are there, as well as Jacob Kurtz, Leo Patterson and Sebastian Hyde. If you haven’t read Criminal before, you don’t have to have read any previous issues or collections to follow along, just take a chance and jump into a world of bad decisions, double crosses, jewel heists that go wrong 30 years later, old comics pros who want their pages back, and deft references to noir, pulp and crime books and films. Criminal brings you the best in contemporary crime comics.

As in previous runs of Criminal, every issues includes an essay about crime films or books. I am so happy to see Kim Morgan writing about Blood Simple, Angels with Dirty Faces and The Color of Money.

Okay, yeah, I know this is from volume 1.

I chose volume 6 because it’s the most recent and it’s an excuse to recommend the comic again after writing about it in some detail. Delicious in Dungeon is an intriguing mix of fantasy and foodie-horror comics with a story of adventurers driven to the extreme of eating what they find in a dungeon. Well, Chilchuck the Halfling rogue and Marcille the Elf magic-user are driven to extremes as they buy precious time to rescue Falin, a party member who has been swallowed by a dragon. But Laios, the human arguing that they don’t have time to go back for supplies, seems awfully keen to eat monsters. Sure, Laios is Falin’s brother, but it’s suspicious that he has a book all marked up with recipes for monsters he’d like to try. And fortunately for him they meet Senshi, a Dwarf who just happens to have mastered not only the art of cooking, but the art of cooking monsters. 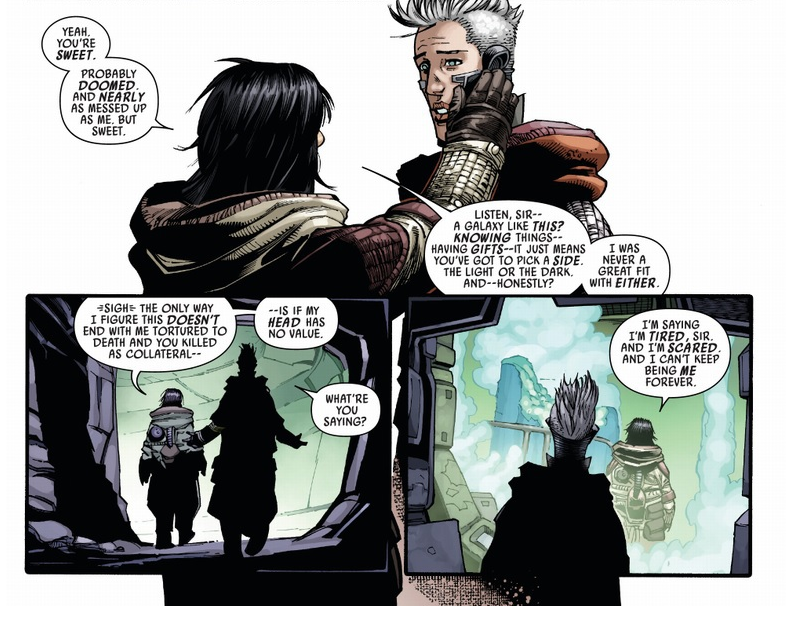 Do you like Star Wars and space opera? Do you like chunky space suits? Do you like disastrous relationships and vengeful murderbots?  Then Doctor Aphra might still be for you under the title’s new creative team. Doctor Aphra is certainly for me.  I am just so fond of her, her sweetie, Inspector Tolvan, and their impossible relationship. Impossible not only because Tolvan is an Imperial officer and Aphra is an Imperial criminal, but because no matter how sympathetic, no matter how well-intentioned Aphra is, no matter how much better a person she seems than her dreadful companions, she’s a disaster for everyone around her. In The Catastrophe Con, Aphra is on a prison ship with people who want her dead, her ex, Tolvan and an angry force ghost. Sure, Aphra has a plan, but as always, things go very, very wrong for Aphra and everyone else. Doctor Aphra, vol. 5: Worst Among Equals is coming out soon, too, and I recommend it if you like yourself some space Defiant Ones, only with murderbots and fungal force ghost zombies.

Sometimes, you just want a quick shot of something good in between your many summer activities, whether it’s refreshing your fruity drink or a breather between the multitude of fancy poolside soirées youve bene invited to. Fairlady #1 is a one-shot, self-contained crime story. It’s hardboiled fantasy or maybe fantastic noir. After fighting in the War of the Harshland, Jenner Faulds, like so many private investigators before her, comes hme to work in security and investigation. Only instead of working the streets of San Francisco, Detroit or New York, Jenner oversees security at a wizard’s tower and takes some side gigs with her partner Oanu.  In “The Case of the Blue Rock,” she invetigates the mysterious disappearance of a a woman. By the awy, Oanu is a Jessu, aka, pretty much a cat-person, which I personally always enjoy in both fantasy and space opera. Also, in Val Lewton films.

It wouldn’t be a summer reading list if there weren’t some hard-covered history and have I got some history for you in Kate Beaton’s Step Aside, Pops. In fact, Step Aside, Pops covers both your history and your classic novel needs as Beaton presents both her take on European and North American history as well as Victorian novels and superhero comics in perfectly simply and perfectly funny strips. Learn things and laugh, which is the best combination.

Weird Love continues to present camp glory featuring heteronormative white middle class anxieties around love and sex. Though sometimes it features something that is just plain horror like “Clown Love.”  Weird Love has it all. Weird Love might even have more than anyone can take in, but what’s summer for if you don’t mix romance and horror?* 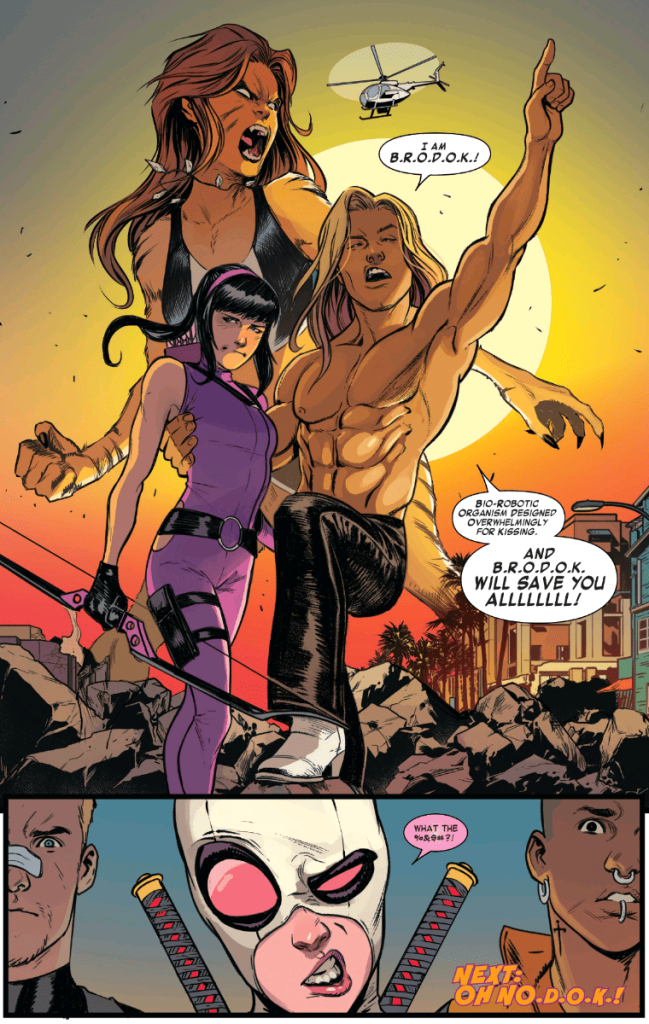 Overrun by a school of landsharks and faced with B.R.O.D.O.K. and Madame Masque, Hawkeye (the good one, Kate Bishop) realizes that there is a lot of supervillainy going on in Los Angeles. She decides to do something about it–calling in Clint Barton (the less good Hawkeye), her BFF America Chavez, her friend Ramone, her boyfriend Johnny, aka, Fuse, as well as the unbelievable Gwenpool, Quentin Quire and his immense collection of t-shirts.  Meanwhile, there’s her parents and some Unresolved Issues. 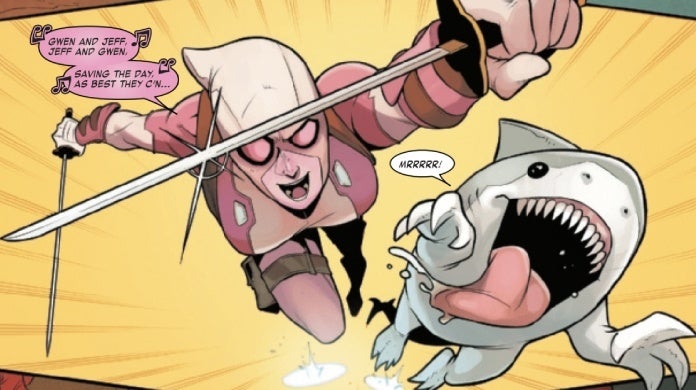 Plus, Jeff the Landshark! What is more summery than a cute baby landshark named Jeff?! Not B.R.O.D.O.K. or clown love, that’s for sure.**

*An argument can be made that summer is more for slushies and swimming and I won’t argue against that at all. Keep the clowns away.

**Yes, I have written about West Coast Avengers before, but you know, it’s just published its last issue (#10) and that makes me sad. So go read it!

Carol Borden is herself a hardboiled, interdimensional mystery.