When humanity, subjugated by the terror of crime, has been driven insane by fear and horror, and when chaos has become supreme law, then the time will have come for the empire of crime.”

—The Testament of Dr. Mabuse

“[W]hatever factors come into play in the cases that we have studied, the conclusion is inescapable that crime comics do their part in the education of these children[.]”

—The Seduction of the Innocent

I had a strange flash of insight while watching The Testament of Dr. Mabuse (1933). I had intended to use the film with my article about comics’ new crime wave, but I was haunted by resonances, so many that once I started writing I had almost two articles worth of material. So his month I offer a strange mix of mad scientists imagined and real—a fictional psychoanalyst and real mental health professionals seeking to perfect or protect society: Dr. Mabuse on one side, Dr. William Moulton Marston on the other and Dr. Fredric Wertham right in the middle. All with manifestos they believe will change–or destroy–the world.

Dr. Mabuse is a criminal mastermind created by the Luxembourgian novelist, Norbert Jacques. In Jacques’ books, Mabuse is a supercriminal who uses psychoanalysis and hypnosis to achieve his ends. And he appears typically so in director Fritz Lang and screenwriter Thea Von Harbou’s 1922, Dr. Mabuse, The Gambler. But in their The Testament of Dr. Mabuse, Mabuse is intent on implementing “Die Herrschaft des Verbrechens”—the Empire of Crime—his ultimate, nihilistic goal of terrorizing humankind.

The Testament of Dr. Mabuse is a film about, among many other things, the contagious nature of ideas. Confronted by the law at the end of Dr. Mabuse, The Gambler, Mabuse goes mad declaring, “I am the state!” In Testament, Mabuse has been confined to a cell in a Berlin asylum. Speaking to no one and seeing no visitors beyond the asylum staff and its director, Dr. Baum, Mabuse writes manically, letting finished pages fall to the floor. As Mabuse, Rudolf Klein-Rogge makes every other imprisoned and insane criminal mastermind with a manifesto look like a punk kid—and has notes only equaled (possibly) by John Doe’s in Seven (1995). Testament was made the same year that Hitler became Chancellor of Germany and, in Mabuse, it’s easy to see Hitler writing Mein Kampf in his Munich cell eight years before. Mabuse’s notes detail perfect crimes. Outside the asylum, these crimes are committed exactly as written, as if the act of writing caused them. Mabuse seems to possess Baum through the act of reading in one of cinema’s most eerie moments. The writings themselves act as a viral contagion or spirit possession whose transmission seems arational and impossible to ascertain. And Mabuse is apparently running a criminal empire while in a non-responsive trance.

While it’s much less important than the film’s points about terror and Nazism, there’s still some resonance with crime comics: The fear that content could corrupt the reader; the fear of a society corrupted by contagious ideas of crime and anti-social behavior; and the power of psychological methods in persuasion. Mabuse, Wertham (1895-1981) and Marston (1895-1947) have much in common. All practiced psychology or psychiatry. Wertham and Marston were born in the same year and were contemporaries of Lang (1890-1976) and Harbou (1888-1954). Wertham was born in Munich. He emigrated to the United States in 1922, coincidentally the same year Dr. Mabuse The Gambler was released. Wertham and Marston were both interested in criminology. Wertham developed a system for evaluating convicted criminals for the New York criminal justice system, while Martson invented the lie detector. And Wertham and Marston were both deeply engaged in comics. Wertham is remembered as the man who almost destroyed comics with Congressional testimony and his book, The Seduction of the Innocent, linking comics to crime and violence among susceptible youth. For his part, Marston created Wonder Woman. Wertham wanted to fortify the community against contagions, Marston wanted to use the mechanisms of contagious ideas to work toward a utopia, and Mabuse wanted to usher in his Empire of Crime. 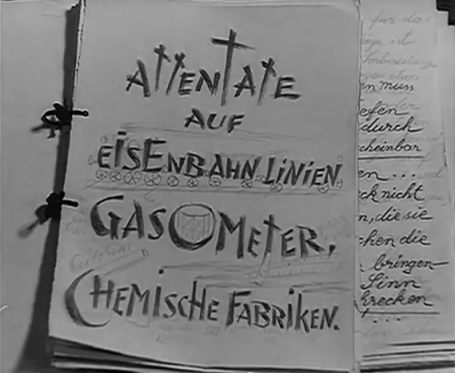 In Testament, Mabuse believes that systematic terror and horror would ultimately save a violent and corrupt humanity. As Professor Baum rants:

[Dr. Mabuse’s] mind would have laid waste to our whole rotten world, which is long overdue for destruction. This godless world, devoid of justice and compassion, consisting only of selfishness, cruelty and hatred. The mind would have destroyed mankind, which itself knows only destruction and extermination and which only could have been saved in its final hour through terror and horror.

(Don’t ask me, I’m not a Nihilist. Ask Owlman or a bomb-worshipping mutant).

Mabuse was a response to the rising Reich and something like what opponents of violent comics sought to prevent.  In the opening of The Seduction of the Innocent, Wertham compares social hygiene to judicious gardening:

Gardening consists largely in protecting plants from blight and weeds, and the same is true of attending to the growth of children. If a plant fails to grow properly because attacked by a pest, only a poor gardener would look for the cause in that plant alone….The question is, Can we help the plant without attending to the garden?

Reading The Seduction of the Innocent is strangely in line with our mandate to explore the disreputable, despised and derided. Comics readers now tend to see Wertham as the personification of overprotective paternalism, the censorious boogeyman hiding under pop culture’s bed. And, like always, that means I want to understand him. What surprised me most reading The Seduction of the Innocent was not the homophobia, cissexism, heteronormativity or sexism, but Wertham’s concern about racist depictions and the promotion of “race hatred” in comics—particularly jungle comics. It turns out that Wertham went on to study segregation’s deleterious effects on African-American children. His testimony and findings were in the Supreme Court’s hearings on Brown vs. The Board of Education. Wertham had lived in Germany during the beginning of the Nazi agitation and, in 1966, he wrote, A Sign for Cain: An Exploration of Human Violence, which includes a chapter on German psychiatrists’ participation in the murder of patients under the Nazis. Taken all together, I think Wertham wanted to prevent what happened in Germany from happening again. And I suspect that is how he became tempted to modify and falsify his results when studying children who read comics.

Unfortunately for Marston, Wertham did not think well of Wonder Woman. Wonder Woman first appeared in All Star Comics (Dec, 1941), just after Pearl Harbor and right in time to fight the Nazis (Les Daniels and Chip Kidd. Wonder Woman: The Complete History. New York, Chronicle Books: 2000: 25). Wertham deplored the stories’ “bondage” and “sadism.” And there is plenty of Wonder Woman being tied up in Marston’s comics. But there was more. As Wertham writes in The Seduction of the Innocent:

Superwoman (Wonder Woman) is always a horror type. She is physically very powerful, tortures men, has her own female following, is the cruel, “phallic” woman. While she is a frightening figure for boys, she is an undesirable ideal for girls, being the exact opposite of what girls are supposed to want to be.

Marston, however, thought the world was the exact opposite of what it was supposed to be.

Frankly, Wonder Woman is psychological propaganda for the new type of woman who should, I believe, rule the world. There isn’t love enough in the male organism to run this planet peacefully. Woman’s body contains twice as many love-generating organs and endocrine mechanisms as the male. What woman lacks is the dominance of self assertive power to put over and enforce her love desires. I have given Wonder Woman this dominant force but have kept her loving, tender, maternal and feminine in every other way.” (Wonder Woman: The Complete History. 22-3).

Marston saw the violence in comics, but believed that he could channel comics’ persuasive, psychological power to work toward a utopia without hate or crime.  I doubt that Wertham approved of this vision any more than he would’ve approved Mabuse’s. In fact, I suspect Wertham would believe that both lead to the same pest-ridden garden. Now Marston’s vision tends to be lost in the titters over Wonder Woman playing out Marston’s BDSM fantasies and over Marston’s polyamorous lifestyle. Like Wertham, Readers get caught in the kink, resulting in many bondage puns. But for me, the tittering interferes with understanding Marston from his point of view.

Marston died in 1947, cutting short the era of Wonder Woman as fascinating propaganda. Since then, Wonder Woman hasn’t ushered in a utopia of men willingly submitting to the loving domination of women. Right now, she seems to be struggling in post-Comics Code Man’s World. There’s a common assertion that Wonder Woman is difficult to write and another that Marston trapped DC, forcing them to submit to a binding agreement to keep Wonder Woman in print. (See? I can do it, too). Since Marston’s death, there have been attempts to make her more “relatable” or easier to write—whether the depowered Diana Prince or Brian Azzarello and Cliff Chiang’s current run revising Marston’s vision and re-imagining Themyscira not as Paradise Island but as the home of brutal women who seduce and kill men and practice infanticide, all supposedly in keeping with Classical myth but far more in keeping with the Empire of Crime and Wertham’s “horror type,” “cruel ‘phallic’ [women]” who torture men and frighten boys.

And so while I don’t know if ideas aren’t necessarily virally self-replicating contagions, they do evolve. And I will take some hope in that.

Carol Borden has more endocrine mechanisms than any male.