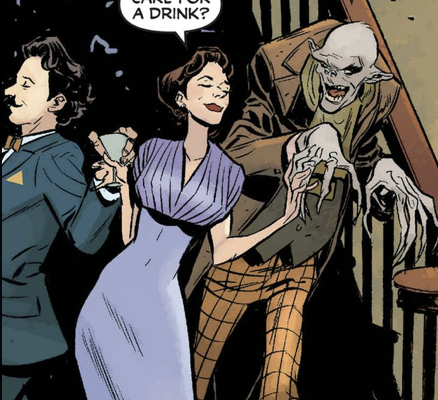 The Thrilling Adventure Hour is a beacon in a grittily realistic, grimdark pop culture landscape, one guiding lost souls to fun, charm and adventure. And I’m glad to see The Thrilling Adventure Hour adapted from podcast radio play into graphic novel because I like what it portends for fun stories in the future and because charm is something I can use more of in my entertainment and my life.

Acker & Blacker Present… The Thrilling Adventure Hour (Archaia, 2013) is graphic novel bringing to visual life the stories and characters from The Thrilling Adventure Hour podcast–a live monthly performance at Los Angeles’ Largo at the Coronet. Each show has several story segments presented and performed in the style of old time radio and brought to America by Patriot Brand Cigarettes and Work Juice Coffee. Ben Acker and Ben Blacker do a crazy amount of writing, just barely on this side of conceivable. They write all the stories in both the podcast and the comic collection. All the stories are good and it amazes me that Acker and Blacker write each one so perfectly and cleverly, with no toxic irony. They also handle the potentially racist, sexist and homophobic material of old serials and radio dramas pretty well, using a diverse cast, both in characters and performers. The stories are imaginative. The music and songs are fantastic and the cast is great.

Of course, in comics form, The Thrilling Adventure Hour doesn’t have access to the Andy Paley Orchestra, actors, or, well, sound at all. But Archaia’s books are always gorgeous and the art adds a whole new dimension—especially given the wide range of artists and styles. I hate using lists in my pieces, but it seems the least disruptive way to share the artists and storylines in the graphic novel. Included in the book are:

I’m not sure how people who aren’t Thrilling Adventure Hour listeners would like the collection.  It is very much a companion piece, but, as I said, it’s more fun, charm and adventure in a world that could use all those things. I think Shaner, Estep, Priddy and Fowler’s art were especialy well-paired with their stories. And my current favorite stories are, “Sparks Nevada,” “Tales of the United Solar System Alliance,” “Down in Moonshine Holler,” “Amelia Earhart,” and “Beyond Belief,” which is a little different than my preferences in the podcast. As a fan of The Thin Man and supernatural stories, I would’ve thought I’d be all about “Beyond Belief” all the time. And I do enjoy it, as I do all the storylines, but it’s true that you don’t choose who you love. Somehow my heart belongs to “Sparks Nevada” and its spin-offs and cross-overs. But then again I’m fickle and “Amelia Earhart, Fearless Flier” has been pitching some serious woo.

One of my abiding interests has been in comics as a silent medium, and there is probably a lot to say about Thrilling Adventure Hour‘s adaptation from an aural medium to a silent one. And maybe I’ll write about that sometime, but I’ve been reading Peter Haining’s The Fantastic Pulps, (New York, St. Martin’s Press: 1975), which is part pulp anthology and part pulp history. The problems Haining describes faced by the publishing industry and adaptations to them at the end of the Nineteenth Century parallel similar problems and adaptations now. And that made me think about nostalgia and adapting old media and genres to new stories and situations. So I’m afraid I’m taking a detour onto the broad, endless highway of nostalgia. 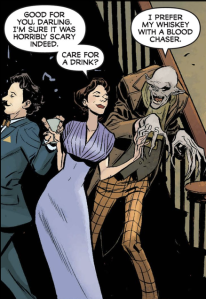 It would be easy to say that the appeal of Thrilling Adventure Hour‘ is nostalgia for the olden days. Charm, fun and wit have tended to be relegated to entertainments from more “innocent” times. And nostalgia seems to be a strong element of fan culture in that desire to preserve, protect and recreate a feeling or moment–to have again the Edenic experience of encountering some comic, movie, television show, game or book for the first time. That desire’s something I feel distant from. At the same time, genres aimed at creating emotional or physical responses—romance, horror, erotica and porn—are the most suspect. And that might be part of why people accuse each other of nostalgia to delegitimize discussion of some piece of culture or mobilize nostalgia to protect beloved culture from criticism. But I think the desire for fun and charming art isn’t solely driven by nostalgia. In fact, I think many of the current realistic takes on genre result from a more immediate nostalgia, but it’s so hard to see when the grit gets in everyone’s eyes, obscuring a desire to recreate that first mindblowing encounter with comics like, The Dark Knight Returns, Watchmen or V For Vendetta.

And while I still enjoy harrowing and hardboiled entertainment, I don’t need grit in everything. Thrilling Adventure Hour is a tremendous relief in both podcast and comic form. Sure, it might be Acker and Blacker’s idea of the best of the Thirties and Forties, but Shakespeare gave us his idea of Caesar’s Rome. I’m not saying that Thrilling Adventure Hour is Shakespeare. We’d have to wait a lot longer to know. I just mean that artists use the past and reclaim old and discarded media and genres to make something new.

Thrilling Adventure Hour is finding new ways we can use an old medium and make old genres new. And, for me, the appeal of Thrilling Adventure Hour is not that it feels familiar, soothing and safe; it’s that it feels new, original and different—not just from old time radio, but from so much other contemporary entertainment. There were so many crossovers of media in the Thirties and Forties—radio, plays, movies, books, pulp magazine stories, serials, comics all adapted and borrowed from each other. So I look forward to more adaptation—from podcasts  to graphic novels and the other way, too. There is an upcoming audio play promoting  Cursed Pirate Girl (Archaia, 2013) in production. It would also make a great animation à la Karel Zeman. I wouldn’t mind seeing Bandette (Monkeybrain) in the style of old time radio, or as a serial with cliffhangers. And in a neat parallel to old time radio, there will be a novelization of the eerie, surrealist, National Public Radio meets weird horror podcast Welcome to Night Vale. Night Vale might also be interesting adaptated as a comic* or a even short film**. I’m happy to see all these possibilities available—especially for charming, fun, adventure stories. Though I would give a lot to hear Acker & Blacker Present… The Dark Knight Returns, The Watchmen or V For Vendetta.

*And it turns out that Welcome To Night Vale might become a comic, too.

**Perhaps in collaboration with the HP Lovecraft Historical Society, who have been doing fine work in promoting madness through both film and radio plays.

Justice rides a rocket steed across the crimson plains of the fourth planet, where one woman rights the wrongs that slip through the cracks of traditional law enforcement. She rides the red plains of Mars. She is Carol Borden.

Carol Borden has written for Mezzanotte, Teleport City, Die Danger Die Die Kill, Popshifter and was a writer for and editor of the Toronto International Film Festival’s official Midnight Madness and Vanguard program blogs. She’s written a bunch of short stories published by Fox Spirit Books, including Godzilla detective fiction, femme fatale mermaids, an adventurous translator/poet, and an x-ray tech having a bad day. Read and listen to her other shenanigans at Monstrous Industry. For her particular take on gutter culture, check out, “In the Sewer with the Alligators.” View all posts by Carol