Because we need a good romcom in the depths of winter: Khoobsurat

A Disney-backed production with a big budget and competent cast and crew does not really qualify for a spot in the cultural gutter. But even in 2020, despite its global audiences and massive output, Indian cinema rarely figure in international discussions of popular culture (let alone “cinema” and its major events and awards). A country of over a billion people is more or less in the gutter. Years ago, at his Overlooked Film Festival, Roger Ebert justified the inclusion of a musical in each year’s offerings by saying that more or less in the 2000s, despite occasional blips of large-scale success of things like Chicago (and later LA Story), film musicals are overlooked. If you put those two factors together, even mainstream, competent, straightforward films end up unfairly disregarded.

In the spirit of polishing off a discarded gem, I want to tell you about Khoobsurat, a 2014 remake of a beloved 1980 movie of the same name (if you go looking for it, know that it is usually written as Khubsoorat; there is no standard transliteration system from Hindi to English). It stars one of Bollywood’s many scions of nepotism, Sonam Kapoor, whom I had never found watchable until this particular role, and Fawad Khan, a Pakistani actor who inspired great fervor in India—think Chris Evans in the sweater in Knives Out—in the mid 2010s before right-wing Hindu nationalist goons terrified filmmakers from casting him. 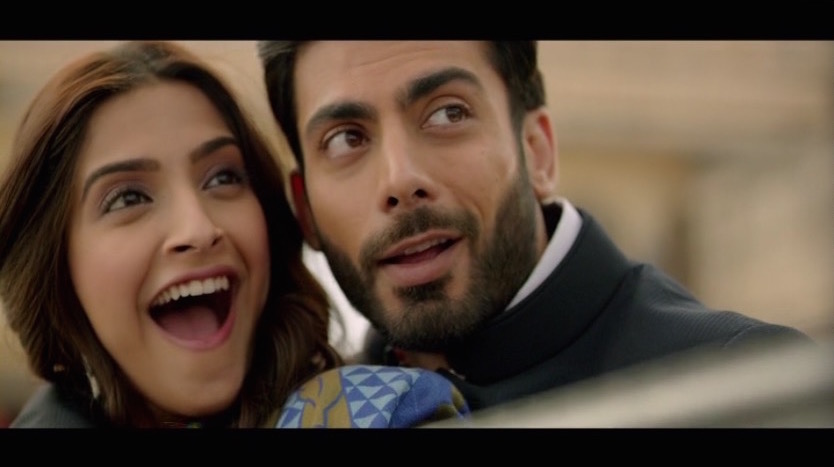 Kapoor and Khan, aka pretty people being pretty.

Kapoor plays Dr. Milli Chakravarty, who is hired by the princely Rathore family to be the physical therapist for their grumpy patriarch. The Rathores live in a palace in Rajasthan, a state in India that often in films for its beauty and its go-to role in South Asian popular culture as a signifier of nobility and its attendant codes of behavior, pride, honor, and historical grudges. (It played this role in one of the first films I wrote about for the Gutter, Ek Paheli Leela.) Khan plays Vikram, a very Mr. Darcy-like only son of the Rathore family, overly concerned with decorum and frowning handsomely at anything out of place. Milli, with her bright clothes, chewing gum, klutziness, and emotional Skype sessions with her equally loud mother, is the opposite of what the Rathores want in another human being, especially one that lives in their home, but her track record of working miracles with her patients means they accept her. Vikram’s younger sister and the household staff love her, because she’s kind to them and is the fresh air the stilted palace needs. Yes, wise reader, you will absolutely guess how this all turns out.

No one is more surprised than I am that I am so charmed by this film, even on repeated rewatching. I loathe Manic Pixie Dream Girls in general; I’m no fan of the House of Mouse; I merely like (not love) the original film; I would never have cast Kapoor to take on the lead role originally played by Rekha (known on this site as the star of Khoon Bhari Maang and Khiladiyon Ki Khiladi); and I don’t find Mr. Darcy/Grumpy Pants type characters automatically attractive.

But here we are. Sometimes you’re just in the mood to have your heart squooshed in such a loving way:  Khoobsurat’s romance is delightful and resonant and believable despite trading in major tropes. All of its cheese is solidly built and well earned. One of its strongest features is that the characters are actual adults: they’re responding to innate desire and affection rather than unsettling passion or any non-self-determined need for a romantic partner, which cuts down the drama considerably. They are sad without each other, but nobody does anything self-destructive when they separate. How unbelievably refreshing to have a buttoned-up, “respectable” man and a woman (any woman) express sexual desire without censure from outside!

I love that the film is willing to show the drawbacks and benefits of both of their personalities and temperaments and is harsh to neither. We viewers know Vikram and all the Rathores need to lighten up and let go (and will do so), but we also see all sorts of signs of their success and, for the most part, functionality. Largely unspoken, I think, is the emotional reality that the Rathores exist in a largely outdated bubble. While they do not suffer the economic stress that sometimes drives the plot in other stories about old families trying to maintain the fabric and relevance of huge homes (Monarch of the Glen comes to mind), their interpersonal system of repression and clipped interactions clearly doesn’t fully work for them. There’s no villain in Khoobsurat, but there is sadness. This is not the typical movie Rajput family of generations of enmity and violence. The Rathores’ palace is not dusty with the weight of history or dissipation, and their staff works efficiently and is part of the modern world. They’re not bad people—they’re just hurting.

Milli, for her part, definitely doesn’t fit in, but she also doesn’t give in. She appears to be a MPDG, but she’s an actual woman (not girl) and it is her profession to help people, not her special mission just for one sad sack of a man. She will survive the film, not make his cure her swan song. The person she falls for is one level removed from the person she’s most directly trying to serve—the romance is collateral benefit to her actual purpose in the story.

Milli and Vikram are certain enough of themselves that they are well poised to collaborate as a couple. Yes, they’re different, but they know it, and they also know how to navigate conflicts, at least in their professional lives, and they have learned how to compromise. The best part of the Bridget Jones’s Diary film has always been Mark Darcy telling Bridget he loves her just as she is, and Khoobsurat offers the same joy.

What a freedom that is, to be accepted for who you are, including your innate potential to improve and adjust within yourself. Love is not being identical to another person; love is understanding them. “Love is not just looking at each other, it’s looking in the same direction,” Antoine de Saint-Exupéry says, and these two have the same desires, not just for each other but for the other people in their worlds. We also know that they listen to each other: he takes her advice after weighing it and finding it beneficial, and she is attuned to what other people feel and tries (sometimes unsuccessfully) to act accordingly.

Milli actually says she’d prefer to be alone than deal with men who want her to be someone she isn’t—have I ever heard this so clearly articulated in a film before?—and by the time we meet her in the story she seems to have stopped taking “we have nothing in common” as criticism. She is comfortable enough in her own skin to to just be her own, different self, even when her oddness is remarked upon by powerful people. That is an amazing feat for any human, especially a female character in popular media. A heroine who gives zero f*cks but is also a kind person, someone who wants to participate in things but doesn’t let them drag her down. Perhaps that’s because, as other viewers have pointed out, Milli’s family loves and respects her. We see what women can do and how happy they can be when they have a genuinely supportive system behind them. I think it could be argued that Vikram does (and, it is implied, will do) more changing,

Paint on the fancy suit=true love.

but I think we also don’t know what Vikram was like before, so we don’t know what his deep-down self is or prefers to be. Besides, Milli’s influence and actual skills extend just as much to Vikram’s family as to him as an individual. In both her professional and personal capacities, she helps the system of which he is a part and which he values.

There is so much Khoobsurat does in telling this admittedly predictable story that is special. The film is just so beautiful to look at. The palatial architecture and interiors are just as gorgeous as they always are in films in Rajasthan, but somehow they seem a little more human-scale here, perhaps because we see them through Milli’s undaunted eyes and she quickly makes them her own. 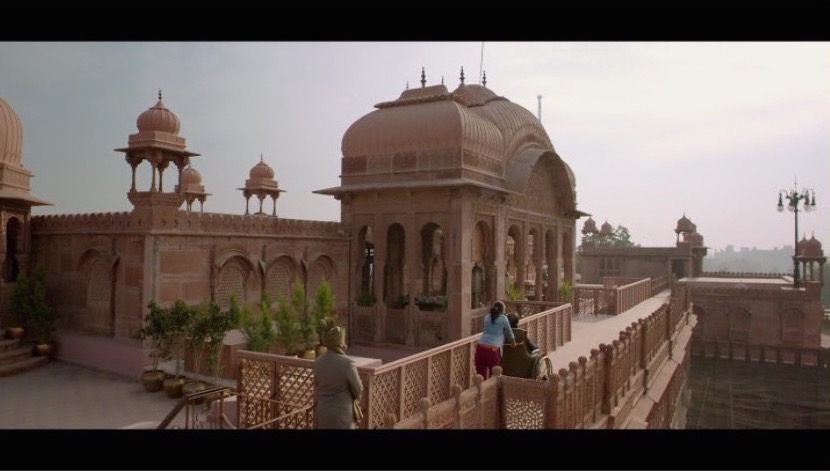 Everyone’s acting really is wonderful. Fawad Khan is the type of actor who can probably have chemistry with a lamp post; by some miracle, Sonam Kapoor is expressive and exuberant without being ridiculous, even when her character feints that direction. They’re a great pair. When he relaxes and she calms down, there is a space between them that feels so loving. Sneha Khanwalkar’s music is largely unexpected in this context, mirroring Milli herself, and I love it.

And the clothes! He is all smooth surfaces and class; she is all color and chaos. I’m sure it’s unrealistic that a doctor would dress as she does, especially when working in the already not-as-professional setting of someone’s home, but it seems consistent with her character.

The other characters are used very well, just enough to add useful context and texture without distracting. There really isn’t a B plot in this film, and I admire the creative team for knowing they didn’t need to add one. The inner monologue voiceovers by the lead characters are so funny and honest, and the contrast they create with what the characters actually say out loud to other people feels very, very real. They underscore how hard it can be to say what you really think, whether you appear to be all Milli-impulse or all Vikram-control.

Khoobsurat delights me. I almost want to call this film candy floss for how sweet it is, but don’t underestimate it: it has a lot of important things to say about self-knowledge, self-confidence, healing pain, and reserving judgment, and it says them with remarkable gentleness and fun.

Khoobsurat is currently streaming on Netflix with English subtitles. Ghosh’s most recent film, House Arrest, which I also liked and was written and co-directed by friend of the Gutter Samit Basu, is also available there.

Beth Watkins appreciates the occasional squooshing of hearts, but in a good way.