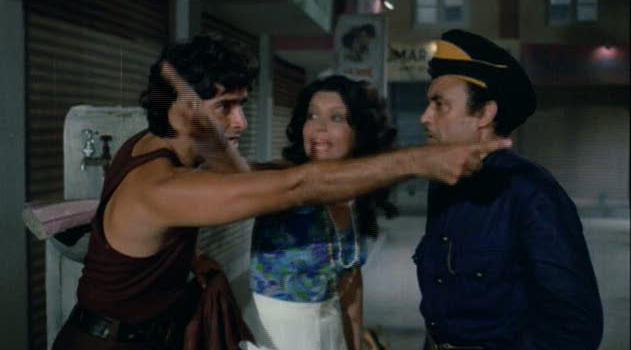 The Book, Some Thieves, a Cop Undercover

In my opinion, the 1970s are the absolute heyday of Hindi cinema: there is little self-restraint but much thoughtfulness, and artists are savvy about formulas but eager to have fun and take risks in how those formulas are enacted. While rooted in, and often containing commentary on, the time and place in/for which they were made, they have elements that endure: strong cultural and emotional resonance, comedy both verbal and physical, spectacle, great music, and stars with personas and styles that still seem current. “More is more,” as I say every time I write about Hindi masala films. Chori Mera Kaam (Theft Is My Job, dir. Brij, 1975) is one of those movies that nobody talks about when hailing this golden age, but everybody should. An A-list cast, catchy songs, and tons of jokes and action make this a classic every bit worth revisiting.

It has just enough groovy style to let you know that 70s-y good times lie ahead but not so much that you’re immediately dizzy. I prefer my dizzines to be earned, thank you very much. This visual trippiness actually serves to plant some relevant ideas, the net-like neon as a snare for the thieves and the shifting shapes are double-crosses and changing strategies.

A very strong multi-generational cast shines in a script that cares as much about the older characters as the hero-age characters. Hindi films are often full of fantastic older performers, but they don’t always get much to do. First up in this film is beloved actor Pran, who plays Inspector Kumar, outsmarting bad guys by pretending to take a bribe and then clamping the handcuffs down on them as they try to shake his hand. Kumar upstanding. He’s patriotic. He takes self-sacrifice to almost as extreme a cost as a character in these kinds of films could possibly do: bad guys kidnap his son and threatened to kill him if Kumar testifies in court, but since Hindi cinema loves sacrifice and separated families, Kumar does what’s best for society. In the pursuit of villains, he gets his share of this film’s love of disguises, such as these exuberant mutton chops and unfortunate brownface. Also deserving special note is Ashok Kumar, one of Hindi cinema’s first superstars and still a total boss in this era of his career, fully at ease and in his element. Shankar, a jovial, often drunk, literary master thief with a heart of gold, enters the story merely by being in the right place—a hammock, as it happens—at the right time, intervening not because he has any skin in the game but because one does not let innocent women and children be victimized by hooligans.

The younger generation of characters is led by my favorite Hindi actor of all time, Shahi Kapoor (last seen on The Gutter as a laconic second fiddle in Shaan) as Bholanath,  another good-natured pickpocket. Despite being the actor of the right generation to read as “hero” for films of this type, Shashi really isn’t the star of this movie, which is one of the things I love about its tweak of typical formula. The other major characters (and performances) are equally strong, but he does get the biggest range of acting tasks, including milking his creaking voice, goofy comedy through line delivery and physical antics, romance with the heroine, and his patented emotional hysterics both straight and overblown. If you’ve never seen Shashi Kapoor in full meltdown mode, you are in for a treat. Of particular joy to Shashi fans is a high-energy stretch of about eight minutes during a con, when his constant wailing, flailing, chattering, and on-the-fly scheming never slow down and are absolutely priceless. This is not the kind of performance that most people associate with the actor, who starred in Merchant and Ivory films as well as producing Indian art-house classics, and it’s a testament to his range. Zeenat Aman is petty thief Sharmili, Bholanath’s business partner, a heroine who does stuff and is funny! Her useful activities include picking pockets at a disco, reading (the hero is illiterate), melodramatically pretending to get hit by a car in order to con money out of the driver, and making ghost noises. She also has some of the heavy lifting of weepiness, because a thief can never simply be happy; her thieving supports her injured father (whose line of work will definitely not come to bear on the plot later, no siree). Our thieves combine to make an unexpectedly hilarious comic team. Equally good is the combination of Shashi, and character actor Deven Verma as one of their marks. Chori Mera Kaam is a romp, and everyone (with the possible exception of the actor playing Inspector Kumar’s second son Shyam, who has grown up to be a police officer too) seems to be in it for that precise purpose and accordingly has a grand time.

A mysterious high-stakes burglar leaves an enigmatic bejeweled calling card. Unlike Sharmili and Bholanath, Number Seven and his team leave mayhem in their wake: empty safes, turned-over rooms, and injured victims. When an assistant asks Number Seven why he chose that number as his name, he punches the poor fellow so hard he tumbles to the ground.

Seven’s HQ: its multi-colored double-decker formality makes space for twice the usual distribution of weapons and posse. There’s something Cake Wrecks about this place—most 1960s and 70s filmi interiors that are supposed to read as impressive in some way or other remind me of cakes, actually—perhaps because none of its elements really coordinate with one other. And doesn’t that stairway look really narrow? How can you carry crates of smuggled goods on that thing?

A book of the same title as the film becomes the center of the action. Sharmili and Bholanath find a manuscript about the techniques of a thief and stumble across a publisher who is easily coerced into printing it. Bholanath lets the publisher think he’s the author, and he quickly in over his head as everyone hounds him with questions, flustered at a publishing party: Seven is very interested in the advice written by an apparent master of the craft, Kumar and Shyam are convinced that it could only have been written by Number Seven (whom they’ve never seen), and women are fascinated by the literary bad boy. Fortunately, Shankar, the real author, pretends to be Bholanath’s secretary and runs interference for his eccentric boss. Number Seven is especially interested in the book’s description of how to use a mask in a dark room to get away with a huge heist, so you can imagine Scooby Doo-style unmasking that is foretold.

The songs in this film contain quite a bit of plot, and a careful viewer will be rewarded. My favorite starts off as a standard romantic spat duet but then tumbles into a jaw-dropping pairing of literal and as-OTT-as-they-come analogies. As Bholanath and Sharmili sing about their hearts, he presents her with his. Yes. An actual (or very realistic, anyway) piece of flesh that beats in her hand. She chucks it into the ocean and he runs into the surf to retrieve it, then tucks it back inside his shirt. In all the hundreds of videos of songs about heroines and heroes and their heart, have we ever seen that? How droll! And it just gets better! In the next verse, Sharmili shows Bholanath her heart, a gleeful hand-made valentine drenched in glitter.

But she throws it into the air before he can take it from her, and as he runs after it, blinking into the sky, exactly as you would a pop fly, the villains run up, put a coat over his head, and bundle him into a car! In the next scene, their collaborator Shankar mutters worries about his heart’s health in order to gather essential information from the villains. Commentary, perhaps, that the only heart—that is, love—that is truly useful is the one that comes from within you, and if you’re using your heart/love as a prop or a toy or a joke, it has no actual use or value?

While I would not recommend anyone watch this just to see what the wardrobe department got up to, there are some delightful examples. As usual for the 70s, Shashi reinforces his candidacy for king of the superfly button-up shirt, Zeenat has some humongous bell bottoms, and a tiny side character reporter has intricately braided hair that usually exists just in cabaret numbers. Sharmili’s outfit while she pretends to be a high-price escort has to be a Christmas tree skirt. The song itself (“Main Kachi Angoor Ki Ber”) is a hoot, the dancing bombshell tripping around with the drunken father/son-like pair, with everyone in on the joke.

The all-hands-on-deck brawl in the climax takes place in so much mud that all the characters end up covered in it. Was this a symbol of criminals’ moral failings or for laughs…or both? In addition to sheets of rain, charging horses, a tiger, torches, and heaps of barrels, Bholanath and Shankar join forces to knock down bad guys by throwing a bucket of water on people’s faces to see whether they’re villains or good guys—and punch in the gut if they’re villains. Shankar then puts the empty bucket on his head, and when a bad guy pulls it off to see who he is, Shankar clocks him in the face.

Even with all of these things—and more!—to contend with, the movie never loses its way. The pacing varies a bit, but it keeps chugging right along through its almost three hours. With only four songs, that’s no small feat, and I spent a significant portion of that time giggling. Chori Mera Kaam is not as message-heavy as other 70s fare—it has some family reunion, redemption of small-scale criminals, and subtle(-ish) commentary on life’s challenges for those who grow up under-resourced—but I didn’t miss that aspect of the classic formula. With so much humor, five strong lead performances, two great songs, and touches of unexpected cleverness, it’s a treat just the way it is.

Chori Mera Kaam is available with subtitles on Youtube. The book Funky Bollywood: The Wild World of 1970s Indian Action Cinema by Friend of The Gutter Todd Stadtman is an excellent guide to more titles, directors, musicians, stars, and tropes.

Beth Watkins would prefer no one present her with their actual heart. Thank you.

View all posts by Beth Watkins