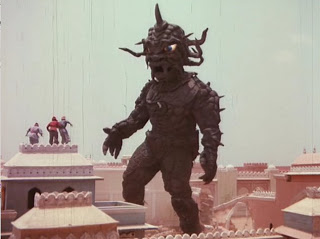 Ajooba is one of those Bollywood movies that almost everybody dismisses—cheap costumes, awkward giant monsters, make-do special effects—until you get them to actually think about it. Released in 1991, this  bank-breaking Indian and Soviet co-production features a plot that sounds more at home in the 1970s in the golden era of the type of film known as “masala”: multi-arc, exuberant, genre-blending stories with big casts and great musical numbers. The director, Shashi Kapoor, had been a major star in the 1970s, but previous to this project he had put his personal funds into producing more subdued and somber films:  the rebellion against the British Raj in the 1850s (Junoon), an adaptation of a  millennia-old Sanskrit play (Utsav), and an update of the Hindu epic Mahabharata set among modern moguls of industry (Kalyug), for example. Despite his many turns as the hero in popular cinema, even as the star in two films by the master of the masala type, Manmohan Desai, Kapoor was never in any projects quite as bonkers as this one, and it’s hard not to wonder if he secretly wished he’d had the chance. So when he finally did make a movie, he stocked it with masala veterans: writer Prayag Raj, composers Laxmikant and Pyarelal,  and a cast primarily made of stars who, although perhaps slightly past their peak, were quite familiar with the styles and energies required by the type of film.*

The plot of Ajooba is hard to summarize—there’s always a “Yes, and then THIS happens!” to be added—but in brief, a demon-worshipping vizier in the fictional kingdom of Bahrestan seizes the throne from the rightful rulers. The royal baby survives the attack, is raised  by kindly adoptive parents (one of whom is not even human), and grows up to be Ali, a cook in his regular life, and also in secret the masked avenger named, Ajooba. India has not made many superhero films (you don’t really need to if you’ve got the Hindu epics for reference  and routinely create regular film heroes on the masala scale), but some viewers count this as one of them. Potions, magicians, and flying carpets are normal in the world of the film, but standard Bollywood moral codes are still upheld: transgressors of  social norms are punished, families are reunited,  friendships are cemented, and romances bloom.

The characters and ways of thought in Ajooba have a connection with the animal world unlike any other film I’ve seen.**  Not only is there at least a dozen species  throughout the film, but the creatures are also noble ani-pals who make a real difference to the story. They provide clues, fight off villains, assist in childbirth, remove obstacles, communicate messages, share in emotional moments, and wear snazzy outfits.

Magic, which functions more or less as standard technology here, is key. The film is introduced with astronomers/fortune-tellers/magicians hovering on a flying carpet in outer space who send a spark to earth to protect the  baby of the sultan of Bahrestan. Potions  shrink people to tiny sizes and giant metal statues come to life. The magic itself is a treat to behold,  mostly consists of little squiggles of light, and I highly recommend pausing to admire the hand-drawn effects.

As a joint Indian-Soviet production, perhaps we can read Ajooba as an unusual example of diplomacy via films. The most significant, motivating role in any masala film, the hero’s mother, is played by a Soviet actor, and if that doesn’t speak to successful international relations, I don’t know what does. I’ve never heard of the hero’s mother not being from the motherland. Within the world of the story, there is lovely international cooperation between the Mughal-ish Bahrestan and the neighboring nation of Hind (yes, really). Bahrestan and Hind are models of diversity and religious tolerance; the palace has accepted into its staff as vizier a man who constantly spouts “Long live Satan!” However, patriotism in Ajooba  is curiously centered on Hind even though most of the action is in Bahrestan. Hind’s king makes the  the biggest sacrifice of anyone in the film, just like a good filmi dad with evil offspring should.

What I love most about Ajooba is just how much of 70s and early 80s masala it serves up, and the more you think about those factors, the more sense this film makes. Villains interfere with the primary family. The father loses a deadly fight, the mother is blinded and left impoverished, begging for a living, and the baby is rescued by a friendly animal and adopted by a humble blacksmith. Those parents go on to teach the child  all sorts of useful, heroic skills. Tokens and talismans are rampant: communicating jewelry, protective necklaces, magical toys, and a sword laden with prophesy. The commitment by the wardrobe department to the look and details of fake-pretend Mughal-ish Bahrestan is impressive, as is Ajooba’s black and silver superhero costume. Bonds are forged by the simple utterance of the word “son” by the unknown mother,  something far more magical in Indian cinema than potions and flying carpets.

I have no idea why Shashi Kapoor made Ajooba when he did. If it had released in the masala heydays of the late 1970s, or even in the early 1980s, I think he could have had a successful film. Maybe not a smash hit but at least not the infamous flop that this turned out to be. My theory is that when he actually had time to make his own film, the style he was most familiar with, and maybe most comfortable in, despite his wide acting experience and critical respect as a producer, was no longer what audiences wanted. It’s a pity, because in my opinion Ajooba is as silly, fun, and exciting as most of my favorite masala films.

Well into the 2000s, filmmakers occasionally experiment with full-tilt masala (Tashan, 2008), sometimes even set in non-current eras (Veer, 2010), and it hasn’t always worked very well, even with contemporary technical advancements and more years of experience to draw from. One of Ajooba‘s problems is that it just isn’t very strong in the all-important emotion department. It’s my hope that this post has convinced you that its shortcomings in heart-tugging are at least partially compensated for by other offerings: evocative locations, sets, and costumes; tons of interesting animals; solid songs and dances; strong chemistry between the male leads; and a classic story by a master of the art. Despite my evangelizing efforts, I’m almost ready to accept that most people, especially those not schooled in masala, will have a hard time not dismissing it as a hot mess. Give it a chance, though; you might just be delighted by this miraculous movie.

* The cast includes a few people you may recognize even if you’ve never watched any Indian films. Hero Amitabh Bachchan was briefly in Baz Lurman’s The Great Gatsby as Meyer Wolfsheim; villain Amrish Puri was the bad guy in Indiana Jones and the Temple of Doom; and magician Saeed Jaffrey was in Gandhi and tv shows like Coronation Street, Rumpole of the Bailey, and Inspector Lynley.  Director Shashi Kapoor was in many international projects, most notably as the star of several Merchant Ivory films (my favorite of them is Shakespeare-Wallah opposite his real-life sister-in-law Felicity Kendal).

** If you are new to the very impressive world of animals in Indian films, peruse posts at Die Danger Die Die Kill or listen to the podcast this I did with the author of that blog, Todd Stadtman.

Screen Editor Beth is only suspected of being an Evil Vizier, despite her penchant for yelling, “Long Live Satan” at every opportunity.