The Many Faces of Ra.One

Mainstream Hindi cinema doesn’t particularly gravitate towards making superhero films. It hardly needs to, given what physical feats the average film hero can pull off anyway. But like many parts of the world, Indian audiences certainly have a taste for American-style superhero films, so home-grown characters pop up, like last weekend’s The Flying Jatt (trailer).

Ra.One, released five years ago and still India’s biggest-scale superhero film, is the example people tend to point to when discussing why Bollywood examples don’t really fly. Superstar Shahrukh Khan takes on a double role, first as a nerdy videogame developer Shekhar and then as G.One, the hero of Shekhar’s game come to life. For his game, Shekhar designs a supervillain named Ra.One (Arjun Rampal), which when spoken by the Indian actors sounds like “Raavan,” the 10-headed baddie of the Hindu epic Ramayana.

At the game’s launch, technology goes haywire and Ra.One escapes, trying to hunt down Shekhar’s son Prateek, who had been defeating him in a trial of the game. Prateek and his mother flee from London to India, where Ra.One eventually tracks them and the battle continues. 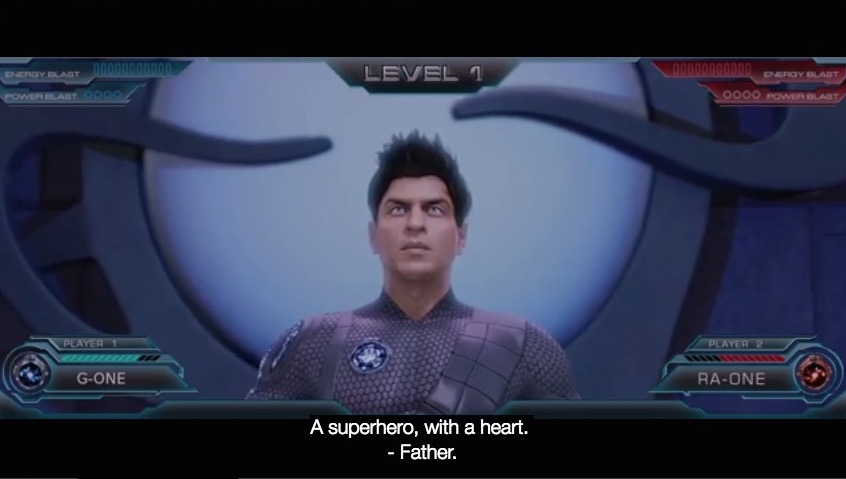 Ra.One was, and if my casual polling on twitter is to be trusted, remains, widely disliked, even despised, and the arguments against it hold up even in hindsight. Problem number one is that the film uses lots of gadgets and terminology to look inventor-y but produces no actual workable systems for its universe. When Ra.One and then G.One manifest in the physical world, it’s not clear how that happens or why they can take on the form of various different real people while also not understanding how humans behave, almost like they’re aliens or robots instead of digital characters (perhaps under the influence of Endhiran, a far better Tamil film of the previous year about a robot who tries to become real).

The dramatic tension in the film is Ra.One’s stalking of Prateek. That’s it? One bratty tween—one who uses “Lucifer” as his gaming user name, I should add—might die? That’s hardly on par with other films’ villains: adulterating India’s grain supply as in Waardat or threatening it with nukes from high in the Himalayas as in Mr. India or even holding a village hostage through random acts of terror as in Sholay. This might be an empathetic risk if the film explored questions like how violent media affect our psychology and social interactions, but it doesn’t. It’s a wild mismatch of scale to story. The plot also focuses on Shekhar trying to win over his son, in manner of dorky but well-meaning dads everywhere, but spends no energy on trying win viewers over to either of Shahrukh’s characters. Shekhar is a racist caricature, and G.One is a dorky Spock with a mohawk and muscles.

Except for its impressive visual effects, the film landed squarely in the gutter, cultural and otherwise, despite earning back its massive budget thanks to merchandising, advance tv rights, and a ridiculously catchy song by Akon.

Seriously, if you can resist Shahrukh’s hips, simultaneously lithe and binary, you’re probably a digital figment too. (The song is a masterstroke of the Bollywood art: it advances the plot, refers to Indian classical dance within a pop setting, matches choreography and its execution to the character performing it, and integrates elements and characters from elsewhere in the film.)

But when I read Aatish Taseer’s recent piece in the New York Times about why he loves Bollywood, I had an “AHA!” moment about Ra.One. It’s a cinema that “dramatizes a society’s deepest tensions,” Taseer writes. “Beneath the overlay of song and plot is the vein of something deadly serious. The place to look for this is not in the face of the hero but in the face of the villain. The Bollywood villain is the embodiment of what India believes ails India.” Maybe its proposal of what threatens and mars its home culture is where Ra.One succeeds, at least in concept.

At first glance, Ra.One actually acknowledges its multicultural setting of London, including an East Asian character (played by British actor Tom Wu, currently in Marco Polo) and a woman in the game development team. But maybe this is just a sly suggestion that foreign- and female-influenced technology is especially dangerous. Ra.One is born in the west, in the very seat of India’s imperial oppressor, but is also facilitated by foreigners from the east and by a woman.

The first human form Ra.One takes is that of the model from a billboard for cologne, so he literally comes from a world of beautiful facades but no depth. The threat to the family and the home is a man whose function is only to be pretty. Definitely not a suitable embodiment of Indian manhood.

Most notably, Ra.One as a villain is a techno-dystopian one, with inventions running amok—and focused on a child, an only son at that. Most of the damage Ra.One causes is collateral to his single-minded hunt for Prateek, but he causes a much higher body count thanks to his inability to consider any other factors and a penchant for chases on roadways.

Evil tech is the feature of my favorite sequence in the film, and one I’ve remembered favorably when watching action sequences in subsequent films. Ra.One hijacks a train, sending it hurtling through the facade of Victoria Terminus, a magnificent station that represents both the British imperial order and the pulsing heart of contemporary Mumbai, a UNESCO World Heritage Site as well as a functioning station used by thousands every day. The villain proves that Indian history is no more safe than its digital future. Meanwhile, the hero gets to be involved with bringing down a symbol of the British Raj while not actually being responsible for the resulting tragedy himself.

This is one of a handful of tricks the writers of Ra.One manage that have gotten lost in the overall groaning about the film. Although I remain unchanged in my opinion that the film doesn’t work well overall, I’m more appreciative in what it attempts in concepts, lightheartedness (seen mostly in comedy tracks about G.One’s trying to navigate human interactions). It’s an enormous miss—and almost set up for failure by its juggernaut of advance marketing—but at least it bravely stepped up and took a huge swing. In retrospect, that’s a significant gift to to formulaic cinema landscapes.

Beth Watkins is covering for Keith Allison this month, whose shadowy figure has been reported all across Europe. In the meantime, she takes up the cape and cowl to defend the Gutter!