I never expected to be reading Archie comics. Archie Andrews’ irresistible appeal to ladies mystified me and I came late to an appreciation for soap operas and straight melodrama. Then there was residual stuff around romance, a punk rock hostility towards the wholesome squares, a dash of internalized sexism mixed with gender dysphoria and a general preference for anything with monsters or things that one could just not find very easily in the real world. I like my escapism pretty fantastic and unrealistic. I did use bits of Betty & Veronica Double Digest in the zine I organized for my college women’s center. But somehow I always end up reading and watching things I never expect to. I got curious about Archie. With Archie: The Married Life and the release of a standalone book for Archie’s out gay character, Kevin Keller, something was clearly up at Archie comics. Then Chris Sims recommended Archie: The Married Life at Comics Alliance and one of my favorite comics writers, Marc Andreyko, recommended it on Fresh Ink with Blair Butler saying, “I love that Archie is probably the most progressive mainstream publisher right now.”

And that made me decide I needed to read it.

One of the things we do here at the Gutter is look at the disreputable and despised, even if it’s disreputable to people who ostensibly love the disreputable. Maybe especially then. And if I have some ambivalence about something, I’m interested in seeing what’s up. And I am glad I did. I ended up putting, Archie: The Married Life: Vol. 1 on my 2011 year end list. Since then, I’ve read Archie Meets KISS (2012), in which four teen monsters bleed the fun from Riverdale and KISS tries to stop them using the power of Rock’n’Roll. And I read The Archies & Josie and the Pussycats (2011), in which Archie falls for Pussycats guitarist Valerie Brown. The relationship between Archie and a Black woman was significant given Archie Comics history of whitewashing. And unfortunately, it’s still pretty significant to see a Black woman as the love interest and romantic lead in a mainstream story. More recently, Archie and Val have gotten married and have a daughter named Star. It’s Riverdale’s second interracial marriage, after Clay Walker and Kevin Keller’s wedding. Things have really picked up in Riverdale. And they’re picking up even more with Archie’s Chief Creative Officer Roberto Aguirre-Sacasa two pretty radical comics, Afterlife With Archie, Vol. 1: Escape From Riverdale (2014) and The Chilling Adventures Of Sabrina #1 (2014), both of which I really like and both of which are damn creepy. This year, Mark Waid and Fiona Staples will be rejigging the Archie gang in a new Archie #1. And soon, Archie will be facing a Predator. I am filled with admiration for Archie Comics’ commitment to trying new things.

Archie Comic Publications was founded in 1939. And, like Marvel and DC, the publisher wrestles with its own history while trying to keep the clean cut kids of Riverdale “relevant,” to use one of the most horrible words for talking about art ever. But where Marvel and DC usually try to solve their problems with the same solutions over and over again—deaths and do-overs, mostly—maybe they could learn some things from Archie Comics. Archie Comics works with history and continuity, but they play with it, too. I’ve said before that I like that comics are mythic. I am not about “continuity” in the sense of hermeneutically justifying every story and event within a narrative universe or a franchise against each other or tracing the events to determine which one is “canonical,” which one is real. In fact, while I respect the pleasure others take in that, it makes my brain glaze over. I am fine with Archie writers Paul Kupperberg, Michael Uslan and Dan Parent’s light narrative frame situating their alternate Riverdales without having to number and chart them—even when alternate reality travel is part of the storyline. I tend to agree with Dwayne McDuffie on issues of continuity and the “Crisis on Mono-Earth.” I care about the continuity within a particular story. I care about continuity of character. Mythic characters are well-defined. Hercules is always Hercules. Arjuna is always Arjuna. And Archie is always Archie, no matter who he marries, if he’s meeting KISS or leading the escape from a zombie siege at Hiram Lodge’s mansion. I like that Archie comics focus on the characters to maintain their stories’ unity and integrity. It’s easy not to notice, because Riverdale seems eternal: Riverdale High, the Chocklit Shoppe, the Lodge mansion. Riverdale can seem boring, until, say, Archie meets KISS or zombies or the Punisher. Archie comics approaches almost all their lines as a starting with the question “what if?” And I love that approach to storytelling.

Fiona Staples’ variant cover for “The Death of Archie” 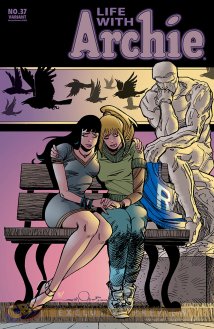 I have a friend who is interested in “character” in both senses of the word and how those senses interrelate. Just as an individual’s character is defined through their actions, so fictional characters are defined through theirs. When DC decided previous DC universe history was null and void in order to start over with their New 52 line and universe, they caused a tremendous existential problem. If you wipe away Batman or Superman’s history, who are they?** But unlike non-fictional people, fictional people’s character can also just be by definition. There is a whole history of archetypical characters in Commedia dell’Art, for example. The young lovers. The fool. The wealthy man. The old shopkeeper. The athlete. The witch. It’s certainly more stylized, but it’s perfectly legitimate. Half my love of Chaucer is in how he takes stock characters and makes them seem fully realized in The Canterbury Tales.

Archie Comics responded to their history by focusing on their characters and placing them in different situations, settings and scenarios. And it seems so startling because it turns out that what seemed like a set world in Riverdale is far more malleable than its inhabitants, which is almost the opposite of DC and Marvel as they exist now. In Archie: The Married Life, the future of all the characters is entirely dependent on whether Archie marries Betty or Veronica. And we get to see both timelines. We see the complexity of their relationships and interrelationships and how nearly everything changes based on just that one decision. Showing both timelines is such a simple narrative choice. But in the world of mainstream comics and their outgrowths, it’s almost revolutionary—not choosing what will be canon, what will be in continuity and out of continuity. In Afterlife with Archie, we see what happens when Sabrina uses the Necronomicon to resurrect Jughead’s dog. Putting the wholesome characters of Riverdale in horror comics works so well. Aguirre-Sacasa and arist Francesco Francavilla bring all of Forties comics back, both Archie and gory horror comics with graphic gore, zombies and (strongly) implied incest. And they do it so well that Afterlife With Archie would never pass the old Comics Code Authority. Where Afterlife With Archie has a definite 1940s EC Comics horror feel, the first issue of Aguirre-Sacasa and Robert Hack’s The Chilling Adventures of Sabrina (2014) feels more like Fifties and Sixties horror, almost coming up on giallo with Satanism, secrets, ancient curses and fraught Freudian themes. Hack’s art, though, reminds me of Seventies horror comics, like House of Mystery and Secrets Of Sinister House. It’s not too far from there to crime comics. Ed Brubaker and Sean Phillips were thinking about Archie in Criminal: Last of the Innocent (Icon, 2011), a story about an Archie stand-in trapped in a loveless marriage with a Veronica stand-in. Now I could easily see Archie Comics publishing Last of the Innocent. 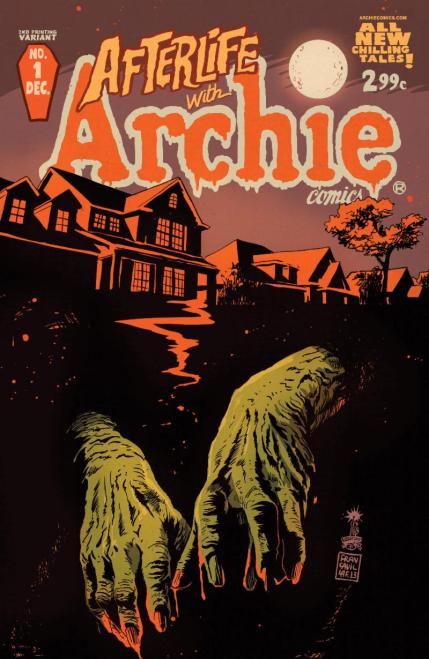 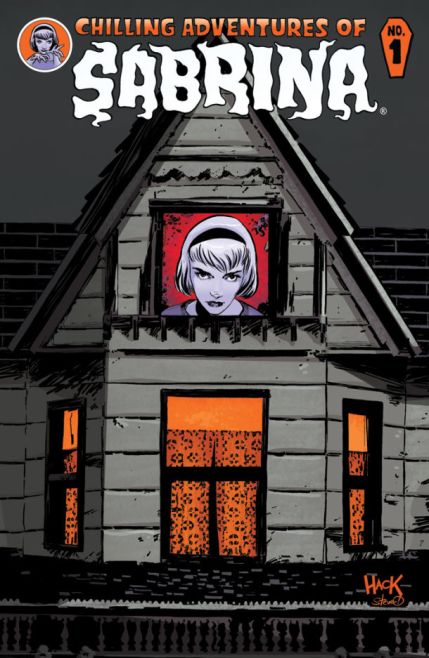 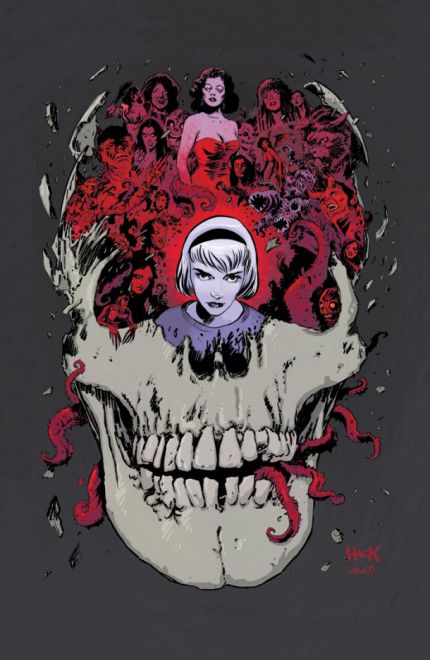 Of course, a lot of this gets dismissed as publicity stunts, which might be something if the books weren’t good. But the books are good and Archie Comics has been very good at this promotion, in part because of the underlying, reflexive assumption that something canonical in Riverdale is about to be changed. And that assumption relies on Archie Comics having a kind of continuity and line unity that they just clearly don’t. Sure, Fiona Staples is drawing new versions of the characters. Sure, somewhere on the internet fans of Archie artist Dan DeCarlo are very sad. But the new Archie #1 won’t be the only Archie out there anymore than zombie-plague Archie is. Sorta like how we were teased that Archie gets married and then we found out that Archie married both Betty and Veronica, just in alternate universes. Archie Comics isn’t replacing their entire line with these new takes that include zombies, gore, incest, Satanism and transdimensional marital difficulties. They aren’t catering to one audience or one continuity. They’re telling stories about the characters.

As transmedia franchises permeate pop culture more and more, it’s easy to be trapped in expectations and ideas about what comics can be—and what stories can be and how stories work. But comics can be about anything. Anything can happen in comics. Anything can happen in stories. That’s their beauty. Right now, a line of comics about teens in a small town is showing the joy of stories and of the possibility of stories. And I appreciate the hell out of Archie’s writers and artists for it.

*I’m using Archie: The Married Life to refer to all the Life With Archie comics I discuss here.

**Personally, this strikes me most with Catman in the new Secret Six. Who is Catman without his history of failure and being bullied? 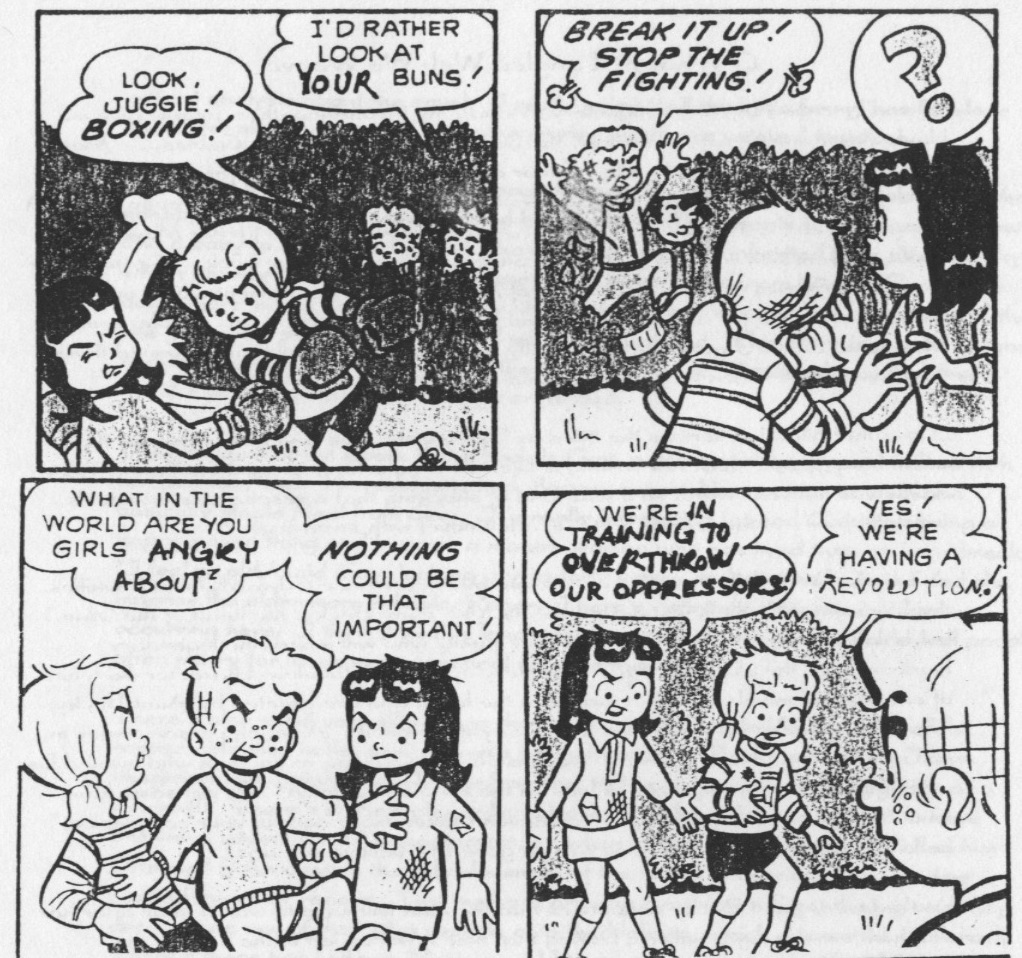 Carol Borden has a long tail and ears for hats / Guitars and Marshall stacks / Hot, sweet, super-cool / Don’t you know this kitty rules?

Archie comics bibliography. (It’s easier than inserting it into the text this time):